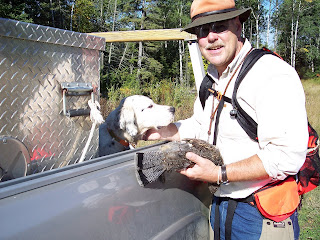 In the U.K. the first day of the red grouse hunting season is known as the Glorious Twelfth, and though many know and celebrate the fabled date, relatively few participate. Each year on August 12 the aristocratic class of England take their places around the moors accompanied by a matched pair of Best Grade English shotguns and a spotter/loader. The gamekeepers then beat the heather with their spaniels and labradors to flush the grouse from the cover and over the waiting gunners. The shooting can be fast and furious and when the gun is emptied it is passed to the loader who offers the other gun which is loaded and ready. A good loader is kind of like a one-man Indy pit crew -- I can picture the gunners sitting around and the end of the day sipping single malt and saying things like, "that old McDowell's a fine chap, he isn't much to look at but he can load my Purdey in 9/10ths of a second."

Each year I toast the Glorious 12th because I like the tradition and it's a reminder that our opening day isn't far off. I used to celebrate with a shot of The Famous Grouse scotch whiskey, but it's such vile tasting stuff that I finally switched to something I like.

Grouse opener here in Minnesota is quite a bit different than the British version. It's a sweaty exercise in pushing through a jungle of brush, fending off mosquitoes and bees, and trying to keep track of the dog. But sometimes you get lucky and the dog finds a bird that flushes into an opening just wide enough to offer a shot. 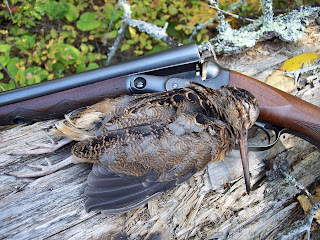 A lot of folks won't hunt during the opener because of the thick cover and warm temps, and I don't blame them. I didn't this year because I was at a field trial, but I was out a couple of days later and my dogs found some birds. I was able to take the first grouse of the season with my Dad's bird gun, which made it even better. Some days later came the woodcock opening day, another day to celebrate.

I've been out with my gun and dogs several times since. The fall colors are becoming brilliant but there is still very heavy cover. I return to the truck with a panting dog and sweat-soaked shirt every time, but still, I go out -- because the season is too brief not to.
Posted by Al R. at 7:05 PM No comments:

Whiskey in a snipe glass.

Some years ago I bought a set of Old Fashioned glasses that were decorated with Ned Smith paintings of upland game birds. That's the kind of thing we bird hunters do, at least those of us who like to lace up some comfortable boots, grab a shotgun, and follow a good bird dog. We buy bird hunting cocktail glasses, and grouse hunting and dog training books, and little silver woodcock pins we stick on our hats until they're lost in the brush. I even have a necktie with sporting dogs on it. And we sit around and talk about things like straight combs and open chokes, setters versus pointers, hatching seasons and drumming counts.

Anyway, at the end of the day when I'm cleaning my gun or kicking back for some reading and I feel the need for a little liquid libation, I always seem to grab the snipe glass. I don't know why, seeing how the ruffed grouse is my favorite gamebird, by far. Still, the grouse glass sits ignored in the cupboard, along with the dove, woodcock, and pheasant, their gold rims glistening after all these years. I don't shoot many snipe, and my dogs never seem to know what to make of them. Sometimes they'll point 'em, sometimes not. They may chase 'em or pay them no heed. You just never know.

Around grouse camp the term has become something of a catch phrase. Whenever someone gets to boasting about his prowness with a gun, or how great his dog performed someone else is likely to quip "thats just whiskey in a snipe glass."

Following the lead and encouragement of a couple of friends, I've started this posting about my experiences hunting, fishing, and maybe some other outdoor pursuits. It's kind of fun - when the sun goes down it's a neat way of extending the day. I've kept a journal for many years but nobody gets to read that, so this will have to do. And if the tales get to sounding too tall... it is after all, just whiskey in a snipe glass.
Posted by Al R. at 7:48 PM No comments: