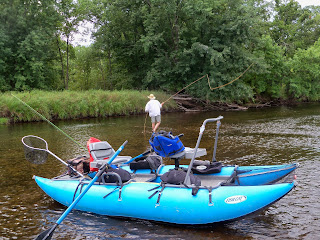 Scotty and I floated the river for bass on Sunday, the day after I’d spent a pretty uneventful grouse opener following Jack and then Molly through the still lush, summertime foliage of a couple of close covers. We did find some birds but I never fired a shot. I guess I had one chance but suffered one of those early season lapses when a grouse flushed from a tree and I had enough of a look to see which way it was going but never raised the gun. I wondered a moment later why I didn’t, and had to accept the notion that I’m just not as quick on the draw as I used to be. I recall the time when I would have easily emptied both barrels at such a bird. Well, it happens and it won’t be the last time. But I’ll admit I’m having some difficulty swallowing the idea that I might as well get used to it.


Scott, who spends more time river fishing than I do, reported that the summer bass fishing had been kind of slow. It’s true that a couple of our floats were a lot more about the fishing than the catching, but the smallmouths were turning on during the last few trips we made. Maybe the Red Gods were smiling, or perhaps I’d finally put on enough miles; missed enough work; and rowed and cast enough to have paid my river dues, but at any rate I hooked and landed some mighty fine bass. Add to that a good number of northern pike (man, one broke me off Sunday that I wished I’d had a better look at!) and it all makes for some fun sport. Brent even landed a musky a few weeks ago and since then Scott has taken to tying and casting flies that you would swerve to miss if you saw one lying on the road. 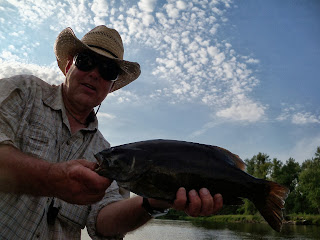 So even though it seems I should be all geared and focused on bird hunting, in the last week I’ve caught bass on the river casting big deer-hair divers and frog poppers; brook trout from a beaver pond with a favored bead-head wooly bugger tied with purple hackle on a 12 hook; and brown trout on a # 14 pheasant tail nymph from a well-known trout river. Who can grumble? And though I still haven’t landed that 21 inch bass, I don’t see carrying my quest into next year as a bad thing.


There was a time when I wouldn’t have considered fishing when I could have been carrying a shotgun instead, but that day is obviously gone. Not long gone, but gone. So far, I’ve enjoyed a pretty darn good year of fly rodding and each time out only serves as inspiration for the next one. In the last month alone I have been witness to the birth of at least a half-dozen new bass fly patterns. Of course, if you consider that the fly fishing season is coming to a close and the season for gunning is only just beginning, it’s understandable to try for that one last fishing trip all the while knowing that the hunting is going to get better and better as the days pass. Still, I can’t help feeling a little bleak at the prospect of zipping the rod tubes closed for the year – even though the comfortable heft of gunstock is always timely and welcome. 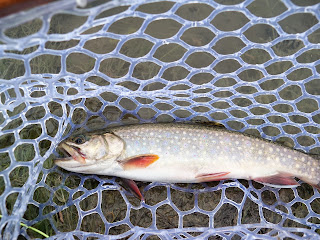 There have been some tough times around the country, part of it seems to be burning up and another part flooding. Many of you know that one of our favorite trout-fishing writers lives next to Colorado’s flooding St. Vrain river, and as kindred spirits we have to wonder how he is faring. If you're not in the midst of it count yourself lucky – or blessed, as I do.