They walked up while I was strapping the boat down for the drive home. Two enthusiastic fellows, not much younger than myself, with the eagerness one feels after driving to far away water full of hungry easy-to-catch big fish. Or something like that. They pulled a nice boat, newer than mine and equipped with some pretty fancy looking electronics, and probably believed this northern Minnesota lake was so full of walleyes they would have no problem filling their live well in short order.

They assumed I was a local, which I am, and despite the confidence they had in their own angling skills, it never hurts to get a bit of local knowledge. We exchanged the usual fishermen pleasantries and one of the guys leaned on the gunwale of my boat and spotted the rod strapped to the port side shelf. “You’re fly fishing?!" 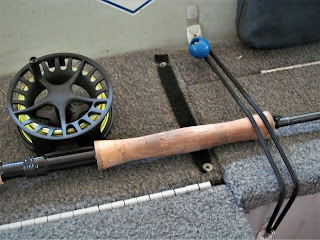 I’ve been asked that before and my short and vaguely descriptive answer is well practiced. Well, they said, that sounds like fun but what about the walleyes. What could I say? Yes, the lake is full of them, watch for the hazard buoys and you’ll do fine.

But I’m fly-fishing bass. I’ve been using a fly rod for a long time, and not just for bass. Trout fishing has long been known as fly rod territory. Then there’s a variety of panfish, and pike and muskies. And yep, I’ve caught walleyes on the fly, but it wouldn’t be my first choice if I was looking to secure the fixins’ for a fish fry. Of course, there are a lot of other finned critters to be caught but I can’t know everything. 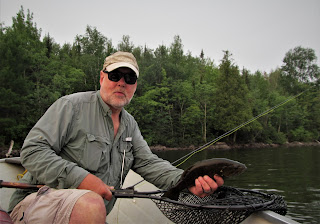 I’m a self-taught fly caster, never had a lesson in my life – I could have used a better teacher, though, ask anyone. I became good at the wrong things. I still practice a lot of them. I like to flip a loop around my reel once in a while, to add some challenge. And let’s not talk about stepping on the line. Occasionally, when my timing is just right, the line seems to shoot out on its own and it feels great. That’s when my fly gets stuck ten feet up in a tree. No telling how far that thing would have flown if not for the tree. The title of my book will be By The Time I'm Good At This I'll Be Too Old To Do It. But every now and then I get it right and my fly lands somewhere close to where it should.

There’s nothing like being on the water before the sun tops the trees and working a deer-hair diver or foam popper over a rocky shoreline. That’s what it takes on the lakes this late in the year, when the bass move off the shallow feeding areas into deep water as the day brightens and warms. A cup of coffee makes good company while the intermittent hum of the trolling motor gets drowned out by awaking song birds. This is a slow, lazy approach that matches my state of mind after crawling out of bed at 4 a.m. It differs from river fishing. There’s no current pushing downstream and the water is usually glassy smooth. Then the theory that the big bass respond to a fly sitting quietly on the water is hard to argue with – indeed, the first bass of the other morning hit my deer hair diver when it sat floating on the water for half a minute or so while I was sipping that coffee and having a look around. Pretty much hooked itself. That fish was also the biggest of the day, coming in a bit shy of the 21 incher I’m still waiting to catch. But that theory isn’t written in stone and the next bass hit just as the fly touched down with a splash. 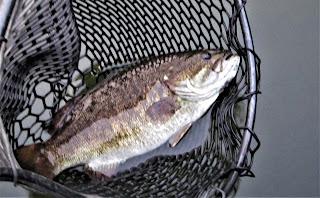 As the sun rose higher it was colored by haze from wildfire smoke up north. By late morning a southerly breeze cleared the air and the temperature climbed. I’d netted some fish, including a couple of small pike and lost a nice fly to the slashing strike of a bigger pike I wish I’d landed. A few boats were buzzing around out on the big part of the lake, searching for walleyes I suppose, and a group of kayaks were exploring some nearby islands. It was another fine morning for me, and I’d be home for lunch. 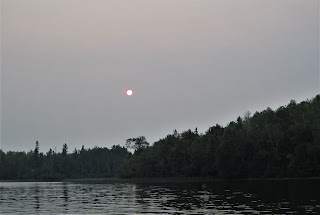