There’s enough snow now to make a difference. It’s truly winter, now. It snowed Christmas Eve, Christmas Day, the day after and was still snowing lightly today. For about a week now I’ve been doing little but lying around, visiting folks and family and eating and eating all sorts of holiday goodies. The holiday festivities have sort of calmed by now and when I woke this morning and saw that snow drifting down I just had to get outside for some activity. 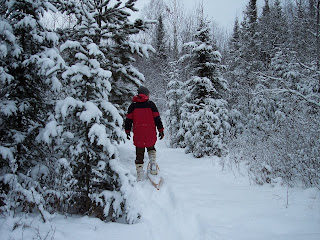 I figured I could get out for a hike before breakfast while everyone was still asleep but when I stepped into my snowshoes I saw the rawhide was broken on one of the shoes right where the binding attached. Damn! Not ready to give up, though, I went back inside to dig through the pile of snowshoes for another that would suffice. I’m not sure why I’ve kept those old shoes, all made of wood and rawhide, especially the ones with broken frames, but I was happy to find one Ojibwa style that was in good shape and had a binding on it. So I would have my hike after all, with an Ojibwa snowshoe on my left foot and an Alaskan on my right.


My planned route had two purposes; I would get some much needed exercise, and I would get a start at tramping down a ski trail. The scenery and possible wildlife sightings were important bonuses. Jack the setter was eager for the chance so he came along. It only took minutes after entering the woods to feel enveloped in the landscape. Fresh snow clung to every stem of the hazel brush, every limb of the aspen, and every bough of the balsam. The snowshoes pushed muffled into the snow and even Jack busting ahead coursed forward in silence.


I can’t believe there was a better thing to do this morning. Here and there I crossed a deer track, some likely moved by Jack. My route was mostly north over and down the first hill that always is tricky when skied. It’s surprising how fast the brush grows to choke a trail, and some trees where down since the last time I followed this route. I found a new way across a thick creek bottom and when I climbed out the other side I heard a grouse flush. A few yards later I found a snow roost in a bit of a clearing. I might have thought there wasn’t enough snow for the grouse to shelter in, but I learned otherwise this morning. I’m always on the lookout for predator tracks, but the fresh layer of snow revealed nothing of that yet. However, in a day or so I’ll find fox and coyote tracks, fisher and marten, and maybe some wolf tracks. 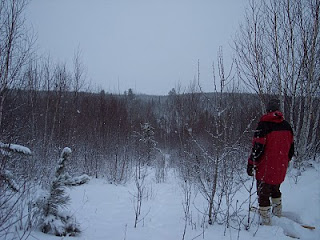 I stopped on the last high ridge before the country descends into the swampy bottomland south of Big Rice Lake. On many days the lake is visible three quarters of a mile away, but today the light snow obscured the view. On the way back to the house I widened the trail on the hills hopefully to make for easier skiing. Halfway home I saw a grouse had walked out from under thick balsams and into my own tracks, but I never saw or heard the bird. Home and coffee, the usual morning bustle and readying JP for her trip back to school, the early hours were mine – a fine start to the day, and I guess it’s time to learn to fix snowshoes.
Posted by Al R. at 10:18 AM No comments:

Autumn is finally giving way, surrendering to the icy grip of Winter. There are several inches of snow on the ground and today’s temp might have reached 20 degrees. I spent several hours hiking in the woods today looking at tracks, traps, trees, and the overall beauty of the new winter landscape. My favorite boots provided sure-footedness and comfort as long as I kept moving but it’s close to time to break out some heavier insulated footwear. I’m kind of old-school as far as trapping goes. I know the fastest way to take most furbearers is from the truck, running and gunning and putting lots of miles and plenty of steel on the ground. I’ve done it and reaped the benefits. You pull up to a place, jump out and grab a pail with trap and bait and run in and make the set. Then back to the truck and off to the next place. But I know a couple of places where I can swing my packbasket on and spent the best part of the day in the forest and never see another soul. I don’t cover as much ground but I like feeling my load get lighter with every trap I set. And it’s even more satisfying when checking the line and the pack gets heavier with fur as I make my rounds. It doesn’t always happen like that, but it’s neat when it does.

I like going on foot. I’ve spent some time on different machines traveling backwoods trails and roads, and probably will some more, but to my way of thinking it’s difficult to beat a non-motorized trek to really enjoy the experience I seek. Some think of horse-power, tires, and track length. I think about snowshoes, skis, and boots. I have to wonder if I hunt because I enjoy seeking the quarry or just hiking around the woods. I spent just about every day of October following bird dogs searching grouse and woodcock. I walked off nearly ten pounds despite the hunter’s feasts I took pleasure in. That’s not a bad thing.

Deer season came on warm and pleasant, at least for most of us. Sure, the die-hards worried over tracking snow and cooling their game, but I think whenever we get agreeable weather in November we should take advantage of it. I wore a pack and carried a map and compass because it seemed I felt more like exploring new ground than killing a deer. Twice I paddled my canoe to new country I’ve never hunted before. There’re not many seasons that allow canoeing during deer season around here. I rambled around the woods far from my usual haunts and discovered lakes, ponds, rocky outcrops and ridges I’ve never seen before. Some of them I may find again, others maybe not. I saw deer. Not many, but enough. I have to believe I hunt not so much to take game as to enjoy the places it takes me. I had some fine days overlooking wooded valleys I’ve never been to and enjoying lunches sitting on sun-warmed rocks. There’s real pleasure to be had in good outdoor gear and having the confidence in it to really get out there. 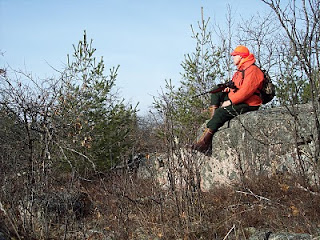 When deer season was over there was yet no snow so I loaded dogs in the truck and shells in the gun and hunted grouse some more. The later season birds sat tight and offered some pretty good shooting, surprisingly, after eluding hunters and critters for two months. And it’s not over yet. As Christmas approaches there are only those few inches of snow on the ground. I found plenty of grouse tracks this morning and I believe I know a couple of setters who would love a romp in the snow.