He strutted up from the alder bottom and respectfully skirted the gravesite of a fine bird dog, though the grouse couldn't know that for the small marker is still buried beneath a thick blanket of snow. Nor could he find his drumming log at the east end of the little meadow under that same layer of snow. It's the first day of spring, after all, and he's eager to get things rolling.


So the grouse wandered around awhile, picking at a bud here and there weaving in and out of the balsams and buck brush and crisscrossing the meadow several times. The sun felt good and was warm in the open and starting to melt the snow, but freezing nights had put a crust on the top layer and the grouse could no longer burrow in for insulation. He spent much of his time hidden under low balsam branches and had survived the worst of winter but dared to expose himself on a lovely sunny morning with the urge to let the world know, or a least a potential mate, that he was on his territory and ready for spring.
But his drumming would have to wait, for no self-respecting cock grouse is about to display his fanned tail and beat his wings from a snow drift. 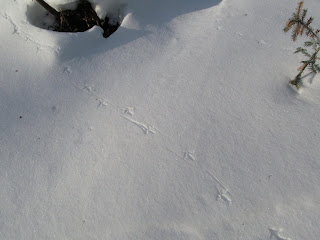 I found his track on my morning stroll across the meadow, Gabby, running on top of the snow and eager to be hunting, found and pointed him perched on a branch poking out of the snow near his buried drumming log. I left the packed trail and post-holed through crusted knee-deep snow to see him sail off back into the thick bottomland, but he will return soon.

A neat sight and no better promise of Spring.

Spring is on the way. Right?

It was a tent camp about 30 miles north, trying to get a couple of setters ready for the spring field trials. A tent pitched, dogs staked out, stone fire ring and lantern hanging from a cut pole tripod. That's what the old photo shows. It was the same time of year as it is now. We'd work native ruffed grouse and woodcock during the day and in the evening I'd sip whiskey with the dogs for company and listen to howling wolves. There was no snow.

Today when I stepped off the packed trail I sank almost to my crotch.


I like winter in it's time and I have the equipment and gear to enjoy it. I like big, juicy cheeseburgers too, but that doesn't mean I want to eat them everyday for six months. It's still winter here but the days are getting longer and I'm thinking about fishing like I do every year about now.


A month ago a whittled willow bass popper was interesting to make. Then a dry cedar branch was found and now there are a few wooden poppers ready to knot onto a leader when the time comes. On those evenings when I get to wondering where most of my life went when I wasn't looking, I can close my eyes and picture the wake of a big fish behind one of these poppers and be excited for what's ahead. 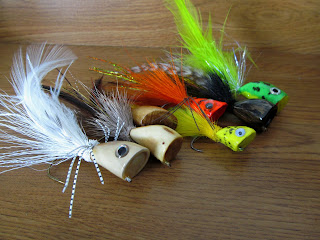