Wind from the east...

The weatherman forecast an east/southeasterly wind for all week. This could have been better news because the water I wanted to try would be tough to fly-cast in a strong east wind, not to mention that “fish bite the least” thing. A few days before I was early on a lake and enjoying the sunrise stillness but catching nothing along the shoreline I was casting to. The surface temp of the water read a cold 47-48 degrees, which I supposed kept the smallmouth down in the depths and mostly inactive. All too soon the wind picked up enough to form whitecaps so I put away the fly rod and moved the boat out to catch a few walleyes for the pan with spinning gear. I've caught walleyes with the fly rod before and I even tied a special streamer for them using a lock of my daughter's blond hair. The circumstances were just right and not something that can be counted on. Walleyes are typically a deeper water proposition and when I'm doing it I always have a fly rod in the boat and will aim for a shallow rocky shoreline when I see it. 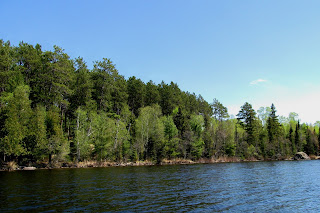 I'd been looking at a particular bay for years. It's called a bay because it's apparently part of the larger lake it's connected to by a channel, but it would appear to be a little lake in it's own right. A third of a mile wide and a mile long, it lies near the end of a 15 mile twisted and hilly dirt road that I was in charge of maintaining during my working days. It always looked like pike water to me but I'd never fished it. There is a decent boat ramp on the north side and talking to some locals I heard it was, indeed, a shallow and weedy bay that was home to mostly waterfowl, beavers, and northern pike. Sounded good to me.

It was calm and the water glass smooth when I pushed my boat off the trailer. The sun was just breaking over the treetops and I figured I should have a couple of hours before that predicted east wind showed up. My plan was to target pike because John, a friend who guides south of here, has been posting photos of pike on social media and I figured to get in on the fun – so my two rods were rigged with streamers at the end of wire bite tippets. A foot-controlled trolling motor moved me along the shoreline as I fired casts towards the bank. A hundred yards from the landing, facing a sun that put a glare on the water even my polarized lens couldn't handle, I made out a swirl in the weeds and the fish had my fly! It wasn't the biggest pike I've ever seen but full of fight before I reached overboard with pliers to release it. A good start to a good day!

An osprey didn't agree with my method and showed me how it was done, hitting the water and coming up with a fish like it was easy. For the osprey it probably was. Three eagles put on an aerial show chasing each other around with swooshing wings and that chircking sound they make. A beaver slapped it's tail at me suggesting I go somewhere else. I turned to see a big pike roll the surface and flip it's tail clear before sliding under. Of course I fan-cast at it with no result. I hooked some others but nothing all that large. I missed some strikes, too. These pike know how to use their teeth and are hard on flies. About halfway around the bay my chartreuse/white streamer was pretty ragged looking with one eye missing and half the tail gone. The largest of the fish I caught hit thirty inches, but I saw two much bigger pike so I know they're in there. That last, and largest pike provided a neat take when I tossed a streamer to the outside edge of a bed of lily pads. The pads parted eight feet away and the wake to the fly nearly had me pulling it out of the water before the fish got to it. The ensuing fight had me believing it was a much larger fish than it turned out to be, taking line from the reel several times (I have a line cut on my finger) in it's short but powerful runs. 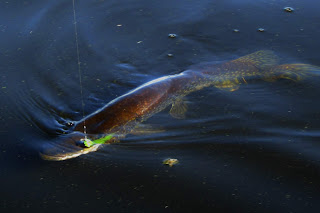 After I took the boat around the bay I steered it into the half-mile channel leading to the main lake. It was lunchtime by then and I was hungry. I'd earlier thought I'd fish a few hours and go home for lunch so I'd only brought my big insulated steel cup of coffee, which was long gone. But the day was too nice to stop then. Yes, I should know better by now. I can't remember all the times I've went out early for a couple hours fishing and ended up dodging deer in the twilight hours on the road home.

There's enough depth in the channel to run the outboard motor but the ominous looking boulders just under the surface remind you to go slow and keep your boat in the middle. The wind picked up when I entered the lake but rather then coming out of the east, it was a west wind. I aimed the boat at a promising looking bay and minutes after starting the bow-mounted electric motor I was hooked up to a feisty smallmouth bass. The water temperature was warmer at 58-64 degrees in the rocky bay but only that one bass took the deerhair popper. The bass seemed to hold just off the rocky shelf in deeper water. As much as I prefer topwater bass fishing, my success increased when I switched to a weighted crawfish pattern and intermediate line. 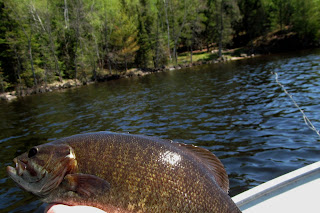 The wind did switch around to the east and after hours casting and controlling the boat it became more of a chore than I wanted, so I just motored across the lake to another promising looking bay out of the wind where another nice bass was hooked minutes later. Perhaps it was my imagination after a long winter but this fish, too, fought strongly and felt bigger than it was. I also spotted a very nice campsite on the shore with a sandy boat landing – another benefit of exploring this new water, and a place to remember. 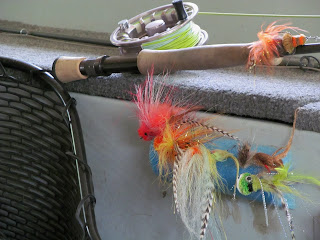 This spring I've tied up a number of deerhair poppers and some different style divers I'm eager to try. This corona virus thing has everyone confused about where to go, and when. There's a lot of water around here and local fishing is easy to come by, but I have some favored fishing holes several hours away. I've had to cancel one trip to Canada because of the closed border. The Covid cases are rising here in MN and there's a few cases reported not all that far from home, and these are younger folks. I can't blame the Canadians closing the border. I'm lucky to live a lifestyle where isolating is somewhat commonplace but still, it doesn't hurt to be careful. Whatever you think about it, whatever you believe, I hope you stay well. And good fishing!