Dad and I were sitting in the ice house trying for trout the other morning and not having much success catching them. We were, however, enjoying the morning warm near the heater and sipping coffee and munching sandwiches. His little spaniel, Molly, was begging for attention and now and then I’d step out to throw the retrieving dummy for her. All in all, it was a pleasing way to spend a winter’s morn, fish or no fish.

I guess no one was catching much because of the half dozen others we shared the lake with, four of them made their way over to see how we were doing. We chatted about the fishing for awhile and one of the guys remarked that he fished because there was nothing else to do. Hhmmm… 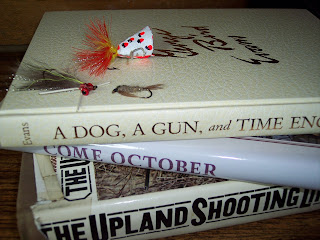 This is the time of year I start getting withdrawal symptoms from the hunting season. The holiday madness and getting accustomed to dealing with the first snowfalls keeps me busy and occupied, but by February things have usually settled down and I get to wishing I was following a dog with a gun, or casting a fly to trout or smallmouth. Cold nights are good for tying a few flies and thinking about rising fish and warm camps. I have a few favorite patterns I’ll stock up on to replace what I lost last summer. I wish I could say those flies were lost on big fish, but just as likely they are still hanging from some high tree branch or rusting on the submerged logs they were impaled on. I get kind of crazy with the bass flies, and I like to believe my clown-colored wine-cork poppers are more attractive than they are. I know I’ll tie up some lead-head Clousers after catching nice smallmouth bass in the BWCA last June.
For a few years I traveled to Tennessee to run dogs on bobwhite quail field trials about this time of year. Once I went to Georgia and gunned quail on a friend’s plantation. Those trips aren’t as easy to pull off right now, so I practice mounting my shotgun in the house, re-living the hits and misses of last Fall, vowing to be a better shot next year -- and reading the best shooting writing I can find. A glass of whiskey on a quiet night with a good book is a real pleasure to me, and just as good is hot coffee on a cold morning letting the day dawn reading that same book. It’s inspiring, and I’m keen to get the dogs out for a run when they beg at my knee, even if it’s trudging through the snow. Jack and I took a long trek yesterday and found one deer shed and all kinds of wildlife tracks. Of course, grouse tracks in the snow are among my favorite and get my heart beating a bit faster. 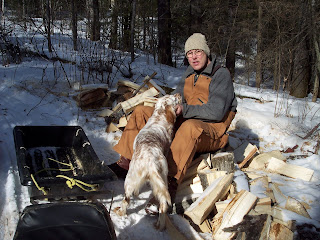 I don’t burn as much wood to heat my house as I once did, but I still burn some. I live on a little patch of ground surrounded by mostly aspen, some of which are over-mature and in need of cutting. There are some that might make good lumber but I have no interesting in any kind of logging venture. I just walk around and drop what I have enough ambition to split into firewood. I know there is better firewood than popple, and sometimes I take some birch and maple when it’s convenient, but a stove full of dry popple heats the house nicely and the thermostat can’t tell what kind of wood is burning. I knock the trees over and block and split where they fall. My old snowmachine pulls a little sled-full of wood over to the shed where I unload and stack it when there’s room under the roof. It’s a small scale, leisurely run outfit that suits me fine.

There are four pairs of skis in my basement ready to go, and I still have to re-lace my snowshoes. The band I play music with seems to get busier and busier and we've spent some weekends out of the area, which has been nothing but fun. Don’t forget about those home projects that can’t get done in the summer because, well… it’s summer. Hunting seasons are far too short for anything but hunting so if anything is going to get done around the house it’ll have to be during the winter.

I wish ice fishing was the only thing to do.
Posted by Al R. at 7:13 AM No comments: