It was a steep ditch bank, all right, but that didn't keep Jack from backing his drift boat trailer down to the point of almost tipping. He tied a rope on the boat to slow it a bit when it came off but I'm not sure how effective it was. I still think it was the alder and willow brush at the bottom that did most of the braking. It's a good thing that brush was there because we still had a sixty foot drag to get the boat in the water, and if not for the brush on each side of the path that boat would have torpedoed itself down the bank and I wouldn't say the two of us could have stopped her. That was the start of a good day on the river. 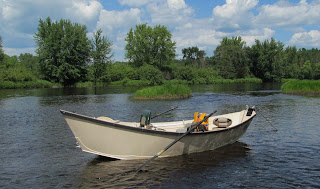 Summer is slipping away quickly and though it's darn near impossible to get in too much fishing, it's just as hard to get enough. Two river trips were canceled to thunderstorms. We don't mind fishing in the rain, of course, and thunder is exciting, but high winds can ruin a trip and nobody stays on the water when there's lightning. Then there are the things that come up. Some are annoyances, some are necessary. That's life. All said, though, I'd be a poor one to complain for I've been out fishing more than a lot of folks. 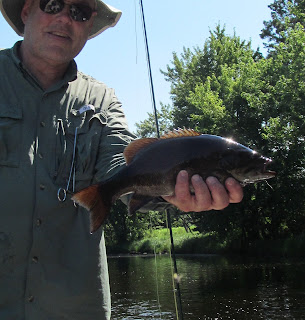 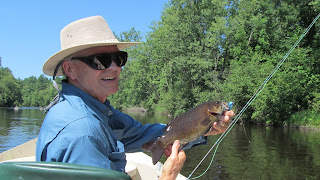 Jack took the first shift rowing his boat while I tossed deer hair poppers at the bank. The smallmouth bass were active and I'd hooked seven or eight before I took the oars after thirty minutes. Most were on the small side but steady action was welcome – the last couple of floats consisted of lots of casting between fish. Captain Jack picked this stretch of water not only for it's population of bass and muskies but for the little pressure it received, likely because of the tough access. We caught bass throughout the very pleasant sunny warm day. Now and then we'd come to a section of river we took for muskie water and we'd grab the big rods and toss those chicken-size flies (Chicken-size flies – what a song title!) hoping for a monster, but to no avail.


We did see a muskie, however, when it followed and hit Jack's big streamer without hooking up. We'd drifted into a wide, deep run in front of a riverside cabin where two folks sat in lawn chairs watching. When the big fish splashed and missed I lowered the anchor so Jack and I could bombard it with our offerings and hope to coax a strike. The fellow on the bank apparently decided to show us flyfishers how it's done and walked to river's edge with a heavy casting outfit to throw a multi-hooked musky plug twice as far as we could cast and skated the thing across the surface. It made a pretty good impression of a young duckling running across the water, but he couldn't entice a strike either. Jack and I figured he knew that fish by name and probably had caught it before. We moved on.


Speaking of ducks and muskies. Scotty and I were on our favorite muskie river earlier this summer and I was happy to have landed one on a bushy new fly I'd tied. Then I was on the oars easing us downstream when we started a pair of Canada geese from the bank into the stream. Then went a single gosling about the size of a grown mallard. Only one. We watched for awhile as the gosling swam along the shoreline to catch it's parents. Scott took to casting again while I kept an eye on the geese. Suddenly the gosling disappeared in a huge splash and was gone! Just gone! Taken by a muskie? What else? We once watched a muskie chase a sucker under our boat and up to the bank before catching it and returning to swim under the boat with the sucker crossways in it's jaws, but I'd never seen anything like that goose disappearing. Wow. 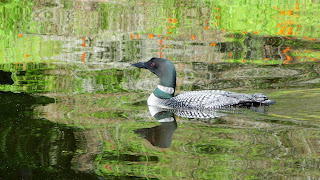 No matter the species it can be tough to remain cool when you see the fish, or it's wake streaking at your fly. If it's a big muskie we all know to leave the rod tip down and strip set. Easier said than done. It takes some kind of nerves not to jerk the rod back and sometimes pull the fly right from the fishes mouth. I think I hook half of my fish when I'm not paying attention. I tend to get distracted by the scenery – a muskrat on the bank, an eagle high in a tree, a loon swimming in it's own reflection – and just the other day I was in Tony's boat looking the other way when the nicest bass of the day hit my popper and hooked itself. I love fishing topwater for the explosive strikes, but you won't see 'em if you're not watching. I can't tell you how many times drifting nymphs under an indicator for trout one of my partners yelled while I was gawking around, “Hey, you got one!” 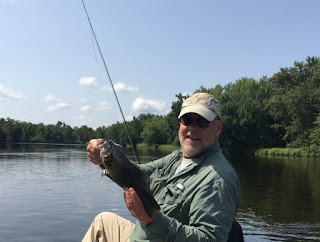 It's been a rainy and cool couple of days. Pretty darn cool for August. The other morning I woke to 39 degrees. The maples are turning and a friend complained about switching the heat on in their house. We haven't turned the heat on, but I might light the stove if this keeps up. I'm not done fishing by a long shot, but this kind of weather has my dogs restless and I'm feeling the pull of bird season, myself. I've caught some good fish this summer, but I think I'm short in the brook trout department. I need to remedy that, and it would be good to use some fly-sized flies again. 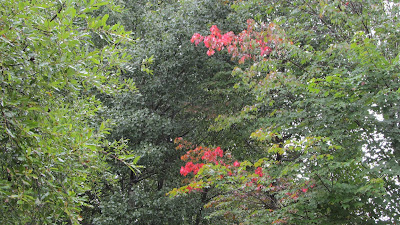