Difference of a day.

It was only a week or so ago I was fitting a new camo cover to my canoe. I envisioned  flocks of migrating waterfowl dropping into the rice lake near here and I wanted to be ready. Sometimes the anticipation is almost as fun as the doing and making the preparations adds to the confidence level. So if the ducks don't show, at least my canoe was camo'd. 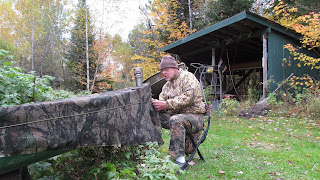 Almost everyday my setter Gabby and I get out for some bird hunting. There were days when we hunted the cool mornings and took it easy the warm afternoons. Other days we were out all day. Just the other day we were out until dark finding and shooting grouse and woodcock in a huge just-the-right-age aspen cover. Pulling off the boots after a day of wing-shooting is the best kind of tired.


Yesterday Scotty and I met up and floated a section of one of our favorite rivers, casting big flies and expecting heavy strikes from the muskies we know live there. A couple of northern pike were landed but the big muskies evaded us. It was a neat autumn day on the river, however, and we watched eagles, swans, geese, and even saw a nice buck deer trotting back and forth on an island perhaps to impress the doe that was with him. Most of the leaves are down, leaving the kind of brown and gray landscape we outdoor folks appreciate, and the bright red winter berries and highbush cranberries stood out like decorations. We talked a little about the predicted winter storm coming and joked some about how today's weather-casters seemed to blow things out of proportion. On my drive home I hit rain north of Duluth and a few flurries were falling by the time I reached home. I crawled in the sack wondering if it would amount to anything. 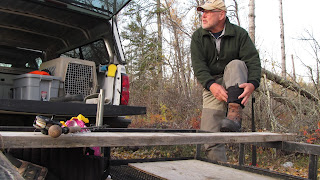 This morning it looked like winter hit for real. A blanket of heavy wet snow covering everything. We all hope it will melt off but the forecast looks like it might be here awhile. I've been looking at the duck boat for a week procrastinating about putting it away before the snows came. Hhmmm. 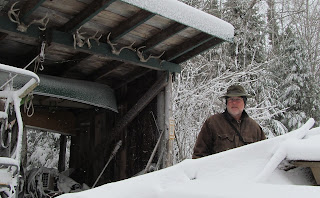 – When I got to town last night I stopped for a beer and to hear a good northland musician play a couple of songs before completing the drive home. I didn't stay long and a hard working friend asked why I was leaving so soon. I explained I was real tired from being up hours before dawn and driving a long way to go fishing all day. “Gee,” she said, “that sounds rough, I feel sorry for you.” Her sarcasm was understandably thick. Why do I tell people this stuff? 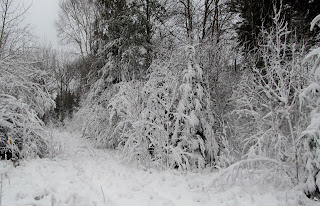 Along about mid-summer, I suppose, the Minnesota DNR announced to the world that the spring ruffed grouse drumming counts were up some 57% from last year. They had to get word out in time for folks around the country to plan their hunting trips to The Land of 10,000 Lakes. A year before, the DNR told us the drumming counts were up 25% higher than the year before that. That's a heck of an increase in a two year period. Some would think there must be a grouse under every bush.


A lot happens between springtime courting and fall shooting. If there were a way to keep track of brood survival into July I believe we'd have a more accurate idea of what to expect come hunting season, but there are some things better left a mystery. I don't pay much mind to spring drumming counts because I'm going to hunt no matter what they say, though I hope they serve a purpose more meaningful than selling licenses.


Well, it seems those who study and report those findings are now scratching their noggins and admitting the grouse season is nothing as expected. Everywhere I go folks are saying the same thing, “There are no birds!” Of course that's not true, but I have to say this is the kind of bird season that temps a person to go fishing.


Despite it all, Gabby and I are enjoying our time in the woods. OK, so we're not finding a lot of grouse but we're finding some grouse every time out. I've been following bird dogs hunting grouse for some forty years. It doesn't matter if the bird counts are high or low, following an enthusiastic dog in the autumn woods with a comfortable shotgun in hand is a pleasure you take as it comes and don't take for granted. 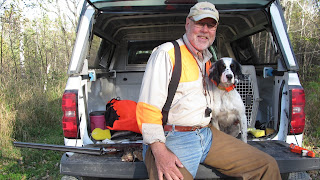 Sometimes I think it would be neat to be able to “catch and release” while hunting – to make a successful shot over a nice dog, admire the bird, and turn it loose to live on. Of course that's not possible and, after all, ruffed grouse are wonderfully delicious. And when the grouse shooting is slow, like this year, we usually find enough woodcock to keep things interesting. Gabby loves it all, points her game beautifully, and is a pleasure to hunt with. I love fall fishing, but October was made for bird hunting.


And October is winding down, already. I hope you're enjoying it as much as I am.


This evening I cleaned my gun and was standing near the garage caring for the birds I shot today when I heard a grouse drumming. Fall time grouse drumming is not rare but tonight it seemed especially welcome after a beautiful day in the woods. The first thing I thought of was how many hunters are outside their camps right now hearing what I heard. It's an absolutely wonderful evening – perfectly still, clear sky, cooling to likely frost by morning – during our favored month of October. 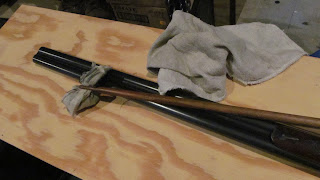 The great outdoor writers, now gone, like Spiller, Foster, and Evans, would christen October the Grandest Month for all the sport it provides. For me following bird dogs pursuing ruffed grouse and woodcock are the headliner. Toss in an occasional outing for sharptails, huns, and pheasants, and don't forget the waterfowl and you can eat up a month in a hurry. And if that's not enough (of course it's not) there's the fall run of steelhead and brown trout and the big autumn muskies are stocking up before winter! Sometimes it's hard to decide which direction to head and everyone who loves the rod and gun laments the briefness of October.

Yesterday morning I was in a little sneak boat alongside the duck huntingest guy I know. Sitting low on my tail with legs stretched out in front and rowing two miles alongside AT in the dark tested my back and hip joints (I'd say the boat won) but once we were set up all was good. Ducks were seen, ducks were shot, and ducks were missed. We'd lay on our backs in the boats covered with blind material to our chests, only our heads stuck above the gunwales. If we couldn't lure the birds to our front there would be no shooting and twice AT rowed out to pick up the kill and adjust the decoys more to his liking. I've never hunted ducks quite like that and if nothing else I'm happy for the experience. 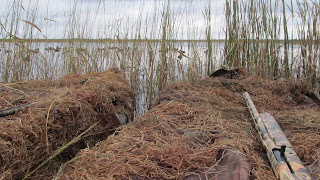 The weather has been tough for upland hunting, early season heat in the 80's and then days of rain. Finally today dawned cool and clear and so far the nicest day yet. There's still a lot of heavy foliage, but fall colors are taking over and we were able to get into some birds. Gabby messed up a little, twice while she was on point she saw the grouse running on the ground and couldn't resist the chase. I wasn't perfect either and I missed what should have been a given straightaway shot. But we brought home enough to fire up the grill and tomorrow looks to be nice as well. 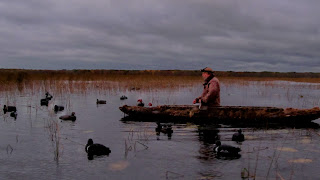 Tonight I think I'll sip some of my favorite and finish tying up a large muskie fly for a float trip next week. Happy Autumn!

In 1969 Joe Cocker stood on the stage at Woodstock and ripped out his rendition of the Beatles song “With a Little Help From My Friends.” It's still my favorite version and I turn up the volume whenever I hear it on the radio. No, I wasn't there. I was too young and it's not likely I would have gone given the chance. I was busy trying to figure out wing-shooting, trout fishing, and Blake & Lamb traps and never really had much hippie blood or rebellion in me. But that song... 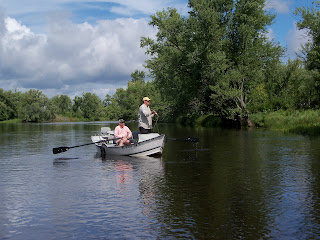 I've spent more time in drift boats these last few years than I ever thought I would and I can thank my friends for that. I've enjoyed the good fortune of floating and fishing countless river miles in one of five different boats owned by my buddies. From the maneuverable rockered traditional hulls to the openness of skiffs to the portability and toughness of the inflatable. 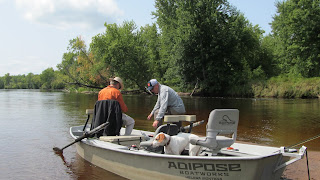 The neat thing about friends with driftboats is they're always keeping an eye out for someone to fish with. That's where I come in. Trout, bass, muskies, pike caught from Wisconsin to Montana out of these boats and though they are something of a glorified row boat, there's nothing like drifting a river and fly casting comfortably from a drift boat. Moving steadily without motor noise; quiet as a canoe you can hold a conversation while never knowing what you might sneak up on around the next bend. 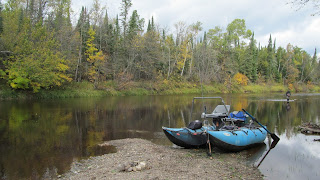 I've long been attracted to the design of a simple boat. Here in the land of lakes motorboats are common and some are fantastic with airplane looking cockpits and giant outboards hanging on the transoms, but my eye is drawn to and appreciates the graceful lines of the canoes which are as plentiful as Lund fishing boats. The blueprint schemes of canoes and drift boats are more parallel than being simply human-powered, though "human powered" speaks to a worthy skill that's becoming rarer and rarer. And these boats can get you to places the Evinrude and Mercury will never see. 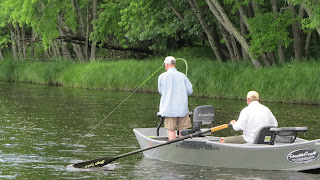 Sometimes it's fun to compare the pros and cons of each model and I've wondered if I was ever in the market what features would I look for? Many years ago I went out west and fell in love with the first drift boat I saw. Now? The many features of each have me scratching my head. But I've no need to fret over it because there's no reason for me to have one. When it comes to fishing from a drift boat I get by with a little help from my friends. 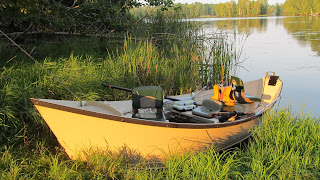