There might be better places to wake up than in a tent alongside a remote northwoods river, but I couldn't think of one that morning. Camp was made after a day's float on Scott's raft, flycasting for muskies. There's a small campsite at the canoe put-in where we finished our day, complete with a table and fire ring and easy to drive to. We'd enjoyed the early summer sunshine and ducked under the hoods of rain jackets when several thunderstorms passed over. Every hour or so we took our turn at the oars and watched our partner cast. When we finally dragged the raft up the takeout, we'd layed eyes on nine muskies and boated three. I fell asleep recalling the events of the day and listening to Barred Owls calling back and forth across the river. 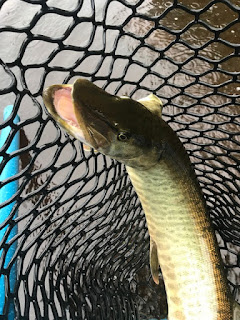 I'm not sure how much a big fish following your fly without touching it counts, but few are the muskie anglers who don't count it for something. I should have done something differently, I suppose, when a very large one stayed right behind my streamer almost to the boat but turned away when I started a figure-eight move. About the only thing we agreed I could have done was plunge my rod deep into the river to make the fly dive. That's fishing, of course, and there are more important things in my life that I probably should have done differently.

My highlight of the day was the 40+ incher that chased half-way to the boat and quit on it to return to it's hiding spot. Scott pulled oars against current so I cast back to the fish which broke a wake, a swirl and a take. I can't say what my first-second reaction was but I do know I gave it a couple of hard, arm length strip sets and the fish was hooked! Muskies don't generally make long runs but there was some give and take with this one. Like they say, the tug is the drug, and a pulsing deeply bent 10wt rod in hand is a heck of a fine feeling. It took some doing but ended up with me out of the raft standing in the shallows for a quick pose with a nice muskie. 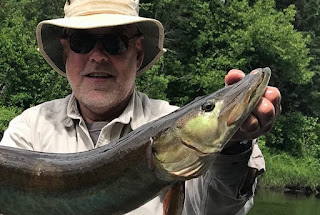 It would have been nice to linger in camp and let the rising sun dry morning dew from the tent, but we'd planned to meet again 20 miles downstream for another day's float, so I put the coffee to boil and packed up a wet tent. Breakfast finished, I savored hot coffee, the smell of the outdoors, the view of an early morning river and the promises it would bring. 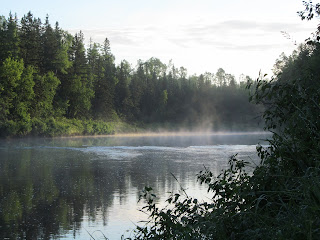 No, I couldn't think of a better place to be. I don't have the spring in my step that I used to have. My beard is gray and eyeglasses are standard equipment. A sore back is pretty much normal these days. But I've lived and hunted and fished in these northwoods for a long time and I'll never tire of it. Good Lord willing there'll be a long time ahead.