When it comes to hunting partners, I’ve long held the belief that dogs were hard to beat. We’ve all heard the cliché about getting along better with dogs than with people. That might be a little bit true in my case. For more years than I care to admit, a good hunt meant a good gun, good boots, and a good dog. I’ll always consider it a measure of fortune to have seen and gunned over at least my share of fine canine companions. And for some years, it seems, canines were the only companions I cared to share the grouse covers with. Occasionally, however, I would find myself in the company of a like-minded cohort whose amity I welcomed. Over the years I have found myself sharing cover and camp with a number of folks that have enriched the entire experience. 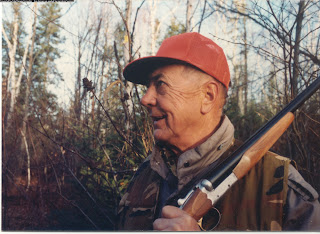 Dad is a man who hunted and fished most every chance he had. He grew up in a family of ten siblings and wild game was an important addition to the larder. Outdoor pursuits were a way of life for him and he passed that on to me. Years later we hunted grouse together over my English setters, a different method than he employed over his beloved springers and labs, but the twinkle in his eyes on those fine October days divulged the familiar pleasure he felt toting a gun behind bird dogs. I learned the way of the woods and waters from him, in my teens we hunted together on more equal terms, but it was finally as adults we hunted as partners. We weren't so much trying to bag game for the pot, though he shot very well and dropped birds that I still can hardly believe; we were out to enjoy brisk Autumn days and each others company. He’s in his eighties now and hunting for him is mostly hearing my tales and recalling his own. What a pleasure it is.

Good dogs are hard to come by, I know, but a good hunting partner is equally rare. Now, I’ve taken folks hunting and I’ve guided folks hunting and had great times doing it, but you don’t take a partner hunting; you just go hunting. After a while you get to know where each other will be without having to look. You get to know how a partner will approach a dog on point, what to look for when they yell “Your way!” and what they mean when they say, “I never expected you to miss that one!” We’ve come to know each other’s dogs, shotguns, shooting and casting skills, tastes in backwoods diners, favorite game recipes, and whiskey. When I go in the thick stuff to flush a bird I know where my partner is, and he knows where I am. We kid each other about missed shots and lost fish when we're on the water, and appreciate and congratulate each other when it all works perfectly. 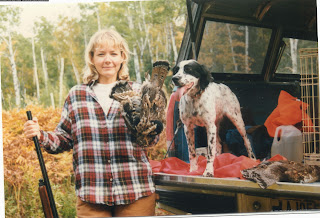 PJ took to grouse hunting like a natural, pushing through the cover, keeping track of the dog and doing a fine job of handling a shotgun as well. She knows which end of a canoe paddle to hang on to and how to sling a packsack, too. Women can look pretty darn sharp when they want, but when I see a gal in outdoor clothes and with a knowledge of hunting and fishing gear I can’t imagine how she could be anymore attractive. We explored the covers and enjoyed far better luncheons than I would have alone -- or with any other partner, for that matter. The dogs loved her doting manner; I benefited from her company, and loved watching her shoot unencumbered by ego or pride. Unfortunately, she hadn’t grown up hunting and I lacked what it took to keep her interested, so when her interests changed I lost a fine gunning partner.

There was a time when good piece of bird cover was called a “covert,” and some of the sporting books still use the term. That the word covert is synonymous with “secret” and “concealed” is no accident. Partners have coverts that they will only visit together, and when my partner takes me to a new place I don’t mark it on my GPS and I won’t take any other hunter there. For those of us who follow bird dogs on preciously offered autumn days, hunting spots are closely guarded secret locations, and there are times when extreme measures are taken to keep them that way. It doesn’t matter that other hunters may traverse the same ground, and perhaps have names for those areas, when I mention heading for “The Loop,” or “Sweet Miss,” or “The Puppy Course,” there are some of us who know exactly where I’m referring to. 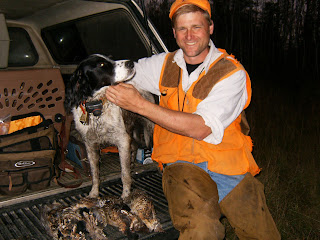 I met Scott many years ago at a field trial. He started much like I did – eager, broke, a taste for Old Milwaukee, and in possession of fine bird dogs. Together we’ve paddled rocky rivers and fly-fished for smallmouth bass, waded and floated world-class Montana streams casting to rising trout, shared camps and Dakota prairies chasing sharptails, huns, and pheasants, and searched out and pursued grouse and woodcock over our dogs in earnest. I know him pretty well, and he knows me and I can’t think of a better partner to have. We live a couple hundred miles apart so it’s always some planning to pull a trip off, but it’s worth the effort. I like to think I played a small part in improving his taste in whiskey, but there’s still a tradition of ending the day with a welcomed Old Mil! 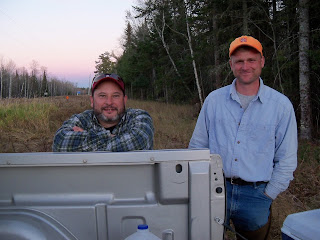 This fall CRP made the trip from the east coast to hunt with Scott and we all met up halfway between Scott’s camp and my place for a successful grouse shoot. The last time I hunted with CRP was in North Dakota some years ago. He’s been in Minnesota a number of times since, and we finally were able to get together and gun over his impressive champion setters.

Paul came to me with his enthusiastic young Llewellin setter looking for a little help getting her started. Together we worked Scarlet on all manner of birds from pigeons to chukars, quail, and finally wild grouse and woodcock. She turned out a pretty decent bird dog and Paul is always fun to be around. He lives close and though we’ve only hunted together recently, it looks like I’ve found myself another fine partner. I know it was fun having him along in the thick this past fall; at least one of us could usually get a shot off. Those grouse have a way of flying off the other way when flushed, but when another gun is waiting that other way, well… now you’ve got something. 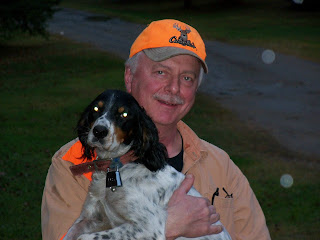 At days end there is little better than sharing a meal and partaking in a little post-hunt celebration; recounting the day, the dog work, shots hit and missed, wildlife spotted, the weather, and the general good fortune in doing what you want, when you want, and with whom you want. Sometimes the day’s results could be boasted in sports shops and taverns, and other times in less tangible terms – either way, a good partner is good to have.