I could still be out trapping, I suppose, fox and coyote season is still open, but I guess I’m about through with that for another year. There was a day when trapping was not only fun, but could bring some real money, as well. Anymore I’m happy to pay my fishing, hunting, and trapping fees with fur money. Now days I set traps because I like keeping those skills alive. I like tracking animals and anticipating their behavior. I like out-witting elusive animals and taking them humanely. I’m pleased knowing how to skin and handle a furbearer, and thinking that, if it ever came to it, I may be able to feed and clothe myself with the primitive skills of old. I guess I’m not yet too old to play Jeremiah Johnson once in a while. Besides, fur garments are gorgeous and I lament the reasons people reject real fur for advertised faux fur. Life is short, let’s not fake anything. Our fisher and pine marten season is short, but my six mile trapline on foot was rewarding. The day I set traps I saw wolf tracks hours old. I watched a bobcat cross my route fifty yards away. I paused at the river and smiled at otters sliding across ice to open water at the old beaver pond. I regretted my camera in the truck, but perhaps not every neat sight is meant to be digitally recorded -- maybe some things are meant to be experienced first hand, you know, get out and see it for yourself sort of stuff.

February is winding down now, but today we are getting what may be the biggest snowstorm of the season. The weather folks say we could expect up to a foot of new snow. Add that to the eight inches already in the yard and it still amounts to a far cry from last year when it was waist deep. It’s kind of nice, actually. I can be happy not plowing, shoveling, and blowing snow. There might be enough for some decent cross-country skiing, and I’m eager to find out. All in all it’s been a mighty mild season, but winter is winter and it’s still pretty nice to enjoy the laziness of it in a warm house. I take the dogs out for a walk, toss a tennis ball for them to play with, hike through the field and maybe hide a pigeon for them to find, but it’s mostly a short term activity to ward off cabin fever. I might spend the better part of the day working on the firewood supply, but I’ve noticed I cut myself some slack in that department, also. I used to figure to cut and block a quantity of wood a weekend. Then it was burn two tanks of chainsaw gas and then split what I could. Now if I drop a good sized tree, and get it cut and split I reckon that’s pretty good for a weekend. It really only takes a couple of hours, but that seems plenty. Because of the nice winter I’ve gotten a head start on it and there are piles of split birch, maple, and popple around the edges of my yard that I’ll haul to the woodshed. When I get to it.

I don’t spend so much time working outside in the winter because there are good things to do inside. I finally cleaned my deer rifle and put it away. It had been leaning in a corner where I could take it up and handle it since deer season. It’s a great rifle, and it’s too bad I use it so little, so I never hurry to lock it up where I won’t see it for months. Later on, next month I suppose, I’ll take my rifle and shotgun out and wipe them down and reminisce over last fall. Yes, I like holding them, swinging them, and picturing what I’ve seen over them and have yet to see over them. Some guys equate their firearms as tools. Not me.

And I like catching up on my reading. I enjoy reading, always have, and while there are some who might call it time wasted, well... they’re just wrong. I have old and dear friends whom I see too seldom, anymore, who are some of the coolest and smartest people I know – and our standard greeting goes, “How ya doing, whatcha reading?” I like that, and I like reading things on paper. I recently had a look at my daughter’s Nook, or Kindle, or whatever it is, and I’m pretty impressed. Wouldn’t mind trying that route, but I’m such a slow reader I have to wonder if the batteries would hold out. I often stop at a phrase or sentence just to ponder it. I sometimes limit myself to a chapter a day just to make a good book last longer. I’m reading two books right now, and I finished a third last night. I recently finished a musician’s memoir that I’d spent a month on. I was going to pass it on to a friend but he’d gotten hold of another copy and finished it in a weekend. Hhhmmm. I know it’s a new age of electronics and it sometimes seems the norm of reading is clicking on the day’s instant b.s. that’s all too readily available from nearly everyone, but thankfully there are still talented writers and authors turning out quality material in book form.

Fly-tying is one of the best things I’ve ever learned to do, or more correctly, I’m learning to do. I know folks who tie flies that are pure art. I haven’t achieved that, but I can keep at it. I have some that catch fish and that’s cool. Years ago P.J. and I took a fly tying class at the local Environmental Center for a fun winter activity. She was new to it but I’d been tying for awhile and when the instructor was trying to get us to slide the thread off the end of our fingertips I failed and announce I used a tool for that procedure. He approached to show me the light but when he saw my rough and broken wintertime hands, he agreed a tool was appropriate. Anyway, this winter I have a new tying vise (thanks, Santa, there was nothing actually wrong with the old one, but this one is way better!) and have been putting trout flies and bass poppers through it and enjoying every delightful minute of it. One of the guys I work with was interested and when I explained the process of gluing, painting, clear-coating, and finally tying the fuzzy stuff to a bass lure, he quipped I have a hundred dollars into a fly. Of course that’s not true, but I’d be happy to sell them for half that. 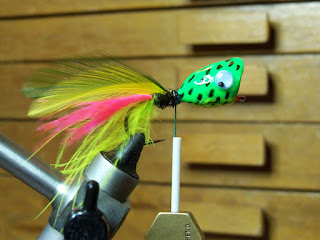 So this winter I’m looking over some forest maps, looking at streams and lakes I’ve yet to explore and those that need revisiting. I've been out ice fishing a couple of times and I need to make some more venison jerky, but I’m also working up a plan to hike into unknown reaches of some local water this winter, on snowshoes if need be, to hopefully encounter pockets of brook trout water that few anglers will put the effort into finding. I’d like to come onto some spots that I wouldn’t try finding through summer foliage without knowing they were already there. If nothing else, I'll get a good winter hike out of the idea, and that’s not a bad thing, either. But I hope I find them ‘cause I’ve got some neat little flies I’d like to float over them come Spring. 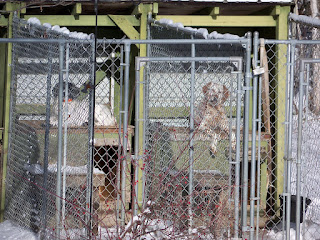