I started hunting when I was a youngster. Dad had me following him around the woods and fields when I couldn’t come close to keeping up, but he was patient and kept the pace easy even if it meant missing out on some shooting. Sometimes we’d walk slowly through the shadowy hardwoods looking and listening for gray and fox squirrels. It became a favorite kind of hunt for me because occasionally I’d get the chance to pick one off a limb with the old Stevens .22 rifle I carried. Compared to trying to hit a fast escaping pheasant with my .410, that squirrel hunting offered a much greater chance for success. In the duck blind I’d get cold and bored but Dad would pour hot chocolate from his red plaid thermos bottle and keep me entertained with hunting stories. We’d eat fried egg sandwiches and toss bits to Queenie or Boots and laugh as they snatched them from the air. The next thing you knew there were birds coming in and shooting to be done. I could hardly hit a thing and I think Dad sometimes gave me credit for his kill, but I loved the excitement of it all and watched proud as our dogs hit the water and worked the cattails for the retrieves.

I found an old, scratched black and white photo of Dad and me with the first snow goose I shot. Mom proudly took the snapshot with an old Instamatic in our basement. Actually, I'd knocked the goose down with my single shot .410 but it got up and off the water again and Dad finished it with his 16 gauge. It was a great day and bagging the goose was neat, but I sure admired my hunting partner. We were a team and I wonder if I’d become an outdoorsman if I hadn’t had my hero to show me how. 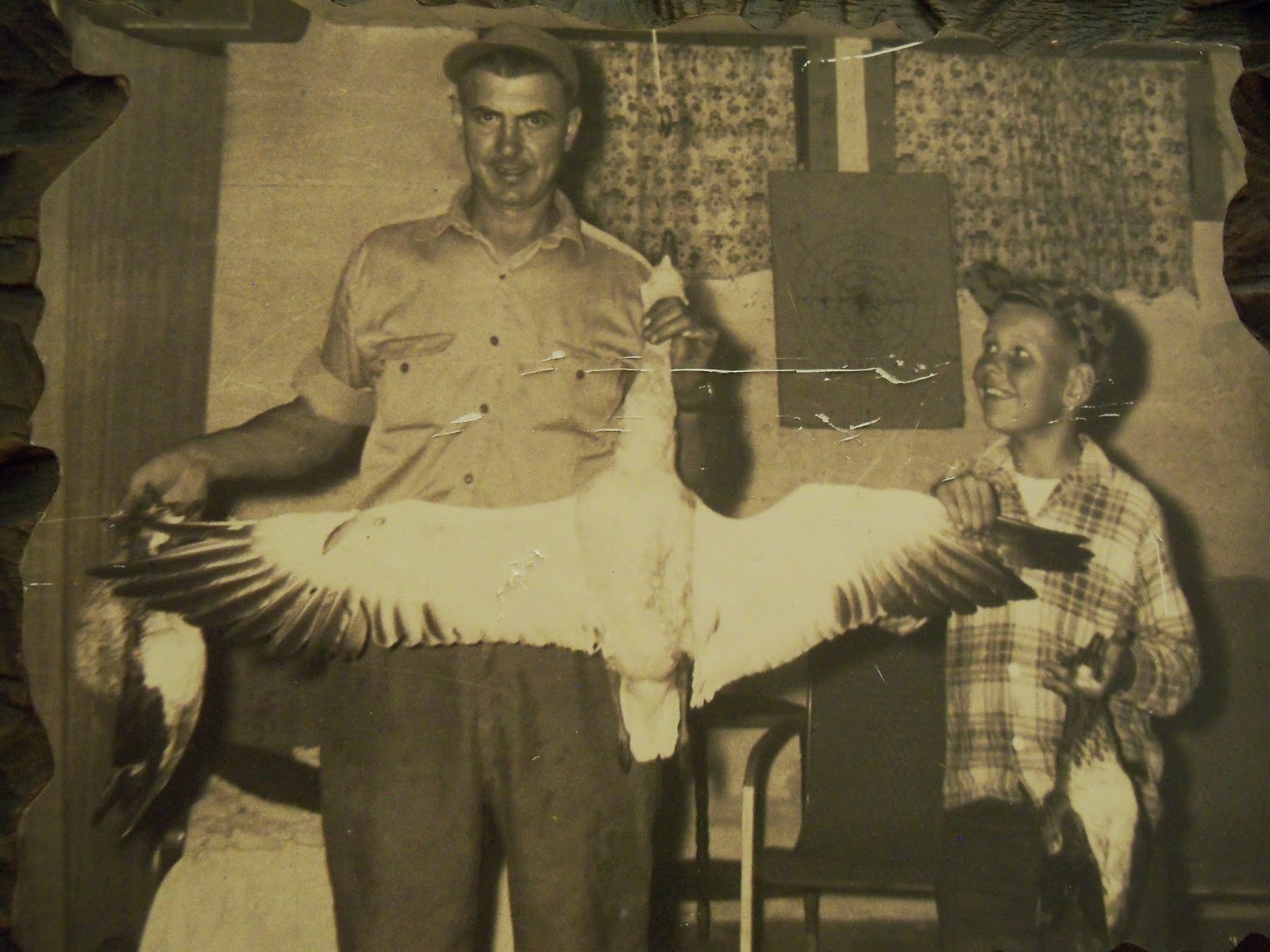 Then came that predictable period when I was between living at my folks’ home and having a home of my own and a few years’ worth of opening days lost some significance. It’s not that I’d forgotten all about them, of course, it just that I was at an age and a state of mind that had me chasing other pursuits. It would be well into the season when it struck me to grab a gun and get out there.

I’ve seen a lot of opening days since then, but it’s been awhile since I’ve lost much sleep in eagerness for that first morning. Though there were days when I greeted the sun at a good bird cover so I could be the first one there, the years have taken some of that edge off. Those types of mornings are pretty much reserved for ducks and deer, anymore. There were years when I was more prepared, too, ready for it to begin. I worked the dogs hard before season and had them and myself in some kind of shape. I shot clays year-round once, but now I haven’t visited the skeet range in years, and my shooting often shows it. I know some good hunters who don’t even bother going out on opening day because the first day of bird season is often too warm, too thick, and too buggy to really enjoy it. But I always go out for at least a little while because, heck, it’s opening day!

I drove up the forest road north of here mostly because it’s close. There is also some good cover with more coming due to some recent logging. I wouldn’t, and couldn’t, began to recount all the grouse and woodcock I’ve taken from the covers along that road. It’s also become well-known and can get kind of busy so I move to different covers as the season goes on. There was frost on my deck that morning and at 9 a.m. the truck thermometer read 36 degrees. It was sunny and cool, unusual for the first day of the season and I was ready to enjoy it.

There’s always that bit of anxiety when heading for a favorite cover, hoping you won’t find another vehicle parked there. I was a little surprised that I saw only two other trucks pulled off on trails, and those were likely bow-hunters. The cover I wanted to hit was open and I backed in carefully ‘cause the long grass hid the row of boulders that block any vehicle from driving up the trail. I hoped the sun would have dried the wet grass some and I took my time getting my gun out and strapping the bell collar on Jack. Still, I felt that common tinge of excitement in my stomach.

Jack took off up the trail and his bell clanged cheerfully ahead. I was wearing my old hunting hat and comfortable grouse boots. The shotgun felt right in my hands and I might have been smiling as we worked up the hill. When I lost track of his bell I hustled ahead to flush a woodcock from the side of the trail. I’d walked right past Jack as he was pointing the bird and never saw him. The season for woodcock isn’t open yet – another opening day coming – so those little birds are safe for now. It took nearly an hour to hit the end of the trail, and Jack had pointed three woodcock on the way in. Now and then I heard a distant shot ring out. That sort of thing always makes me wonder if I should be where they are, or if the shot was a road hunter swatting a grouse off the shoulder.

I guess it does kind of bug me if someone else is getting shots while I’m hitting the woods and not, but I’ve long known the rewards of fair chase and wing shooting are not measured by numbers. I could have been disappointed at not finding grouse, but I'd heard blue jays and song sparrows, a cool breeze moved the treetops lightly, I looked at deer and fox sign and a flock of geese went over. It was just too nice to be disappointed in anything.

We were getting back towards the truck when Jack’s bell dropped silent in the woods to the left. I took a few steps in and spotted him motionless in the shadows. I was able to get past him when the beat of wings and blur of motion caught my attention. The grouse was high and flashing against the sky between the leafed branches. It might have flushed from a tree, but it didn’t matter. I brought the old gun up and fired once, then twice. I thought it faltered and went down but wasn’t sure. I sent Jack and he took a wrong line, of course, and overshot the bird. Then I heard the wings beating their last on the ground and I knew we were on the board. Jack soon caught the scent and make a fine retrieve. Let the other hunters hear my shots and wish they were where I was!

Molly tried hard for another hour on another cover but we moved only one grouse that I would have shot, and likely hit, a few years ago. I guess I was getting a little tired because when the grouse flew across the trail it caught me sort of flat-footed and I never raised the gun. We followed it into the woods but I heard it escape well out, unseen.

It was past lunchtime by then and I called it a day to head for the Fire Hall spaghetti feed, which was a fine idea in itself. The dogs and I had a good workout and something to show. It was a beauty of a day and a great day to be out. I suppose I’ve killed more birds on some openers, and I’ve probably taken less. Either way, it was a fine opening day and the season is just getting started. Good hunting. 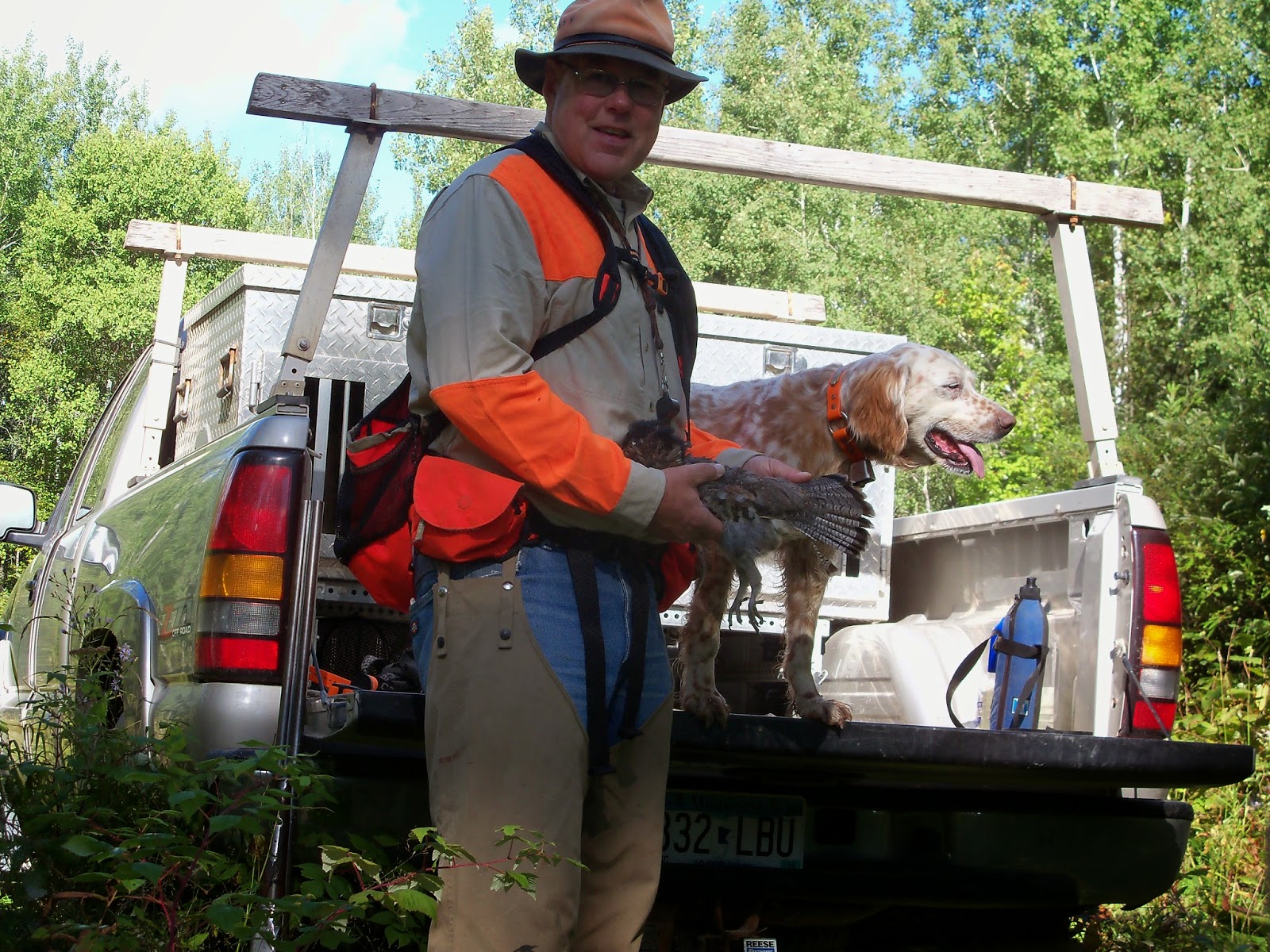