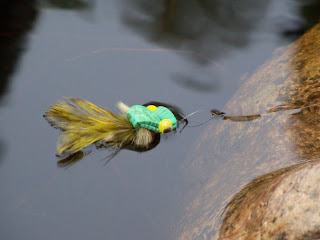 The foam frog landed inches from the shoreline and rested a few long seconds before I gave a short jerk and plopped it a foot across the surface. It sat still for a moment before the line slowly started to drag it into the lake. That’s when the smallmouth bass hit it with gusto and the fight was on! The fish pulled back and forth before it broke the surface and I’m sure I was wearing a smile that matched the bend in my rod. I was happy to reach down and grab the fish by the lip and admire the feisty bass before releasing it to grow and fight again. Three days before I was catching eating-size crappies on another lake with minnows and jigs but there’s nothing quite like playing a lively fish on the fly rod! 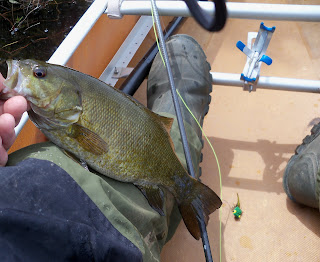 I’d found this little lake years ago when I was exploring grouse covers with my setters. It takes a half-mile hike to reach it from the forest road, which is enough to nearly guarantee an un-crowded setting, and it felt good to have my canoe on my shoulders as I made the portage in. A walleye stocking effort failed, but the smallmouth bass population is claimed to be “thriving,” which is a stirring declaration to a guy who loves pursuing them with a fly rod.

Author Jim Harrison wrote about the world-class smallmouth fly fishing he enjoyed in Quetico Park, which isn’t all that far from me. I’ve been there a lot, and have experienced the best of it as well, but it requires some planning, reservations, fees, and a couple of days (at least) of canoe travel and camping. Whenever I can get a lead on some close bass waters I take heed, and if it can duplicate some wilderness travel all the better. There’s nothing like fooling a fish, any fish, with fly-fishing gear and I'm happy for the chances I get.

When I was getting my gear together I opened a box and found a pair of foam frogs I don’t recall purchasing. I know I didn’t tie them myself – they may have been a gift, but they were too appealing to leave home. I assume they were designed for large-mouth bass, but it was worth giving them a try on the water I was heading for. Besides, how fun it would be to catch fish on something that looks like a cartoon character!

I couldn’t have picked a better day than yesterday. The day before I worked the dogs between rainstorms until the big ones blew in that afternoon and chased me home with lightning and thunder. Today is much the same with wind and rain, but yesterday was calm, cool, and mostly overcast. The goldfinches and rose-breasted Grosbeaks were feasting at my feeders when I left home and it seemed a perfect day. Even my casting came easily and my rod felt like an old friend as the line unfurled overhead and stretched out on target after a long winter’s rest. And it was easy to keep the canoe in position and work the shoreline with my offerings, something I don’t take for granted, since even a soft breeze can become a battle in a solo canoe. 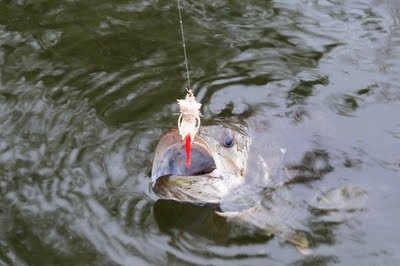 I didn’t hammer the bass like I’d hoped, but I did affirm there was a good population that I will be happy to visit again. Nor did I land any big trophies, but I’m encouraged by a good number of spawning beds, even though I saw only one with a bass tending. I fished the frog for a while until the action slowed and then had success with a deer-hair diver. My Clouser Minnows hooked one nice pike, but I couldn’t hook a bass with them. Still, it was a fine day on the water with canoe and rod so I toasted my good fortune with Makers Mark and hit the sack with a smile. I believe it is early yet, and the smallmouths will be more aggressive in the coming days. I only hope I can get there to find out!
30 May 2011