Yesterday I was in town to see my dentist and then visit the cool new coffee shop just opened by a musician friend of mine and her significant other. It’s a short walk from my dentist’s office to the coffee shop with a sporting goods store in between so I first stopped to see what was happening in there. I immediately ran into a fellow I know who, while checking out wool shirts, pointed out there are only five weeks left before the days start getting shorter. Thanks, man.

The coffee shop is run by neat folks that I’ve known for a couple of years now, but I didn’t realize their combined talents and visions in this coffee shop idea. They got hold of an old downtown clothing store situated perfectly on the corner of Chestnut & 3rd, remodeled and restored and exposed some of the finer architectural features like uncovering some of the original brick walls. Then built a massive stone and steel wood-fired oven in which they bake all manner of delicious pastries, breads, and pizzas with the help of a friendly and welcoming staff. With walls full of art and good music in the background I enjoyed a cup of real good coffee and a warm, mouthwatering blackberry muffin. If you pass through Virginia, Minnesota it’s easy to find and worth seeking out.

It took a while but spring finally did arrive and it’s been an interesting one at that. I couldn’t wait for the rivers to open so I crossed the border, nonresident license in one hand, fly rod in the other, and hiked through snowy woods to fish the fabled Brule before the spring melt turned it into a raging torrent. I dealt with numb hands and iced rod guides until the sun finally warmed the air some, but a beauty of a river through a snowy landscape and biting brown trout made for a memorable day. 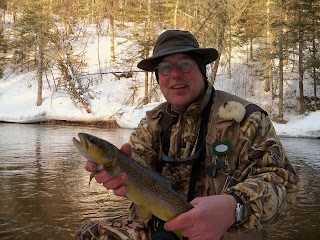 I’m new to steelhead fishing and this spring I decided to learn. A good visit to a friendly Duluth fly shop set me on track and I left with a few recommended fly patterns and an idea of what to tie on my own. I was also temped by the newest in rods and reels, of course, but it turned out my rod works just fine. John, the owner, shared some tips and technics and made the bold statement, “I’ll guarantee you’ll catch a steelhead!” Brave words for a man who’s never seen me wield a fly rod – those that have wonder how I ever catch anything. Amazingly though, he was right. I tried to keep an eye on the North Shore stream reports, but my first attempt was a little too early with high, fast water that made for some tricky wading, if not downright dangerous. I did hook a couple of steelhead, however, from the pool I stood in while getting showered by spray from the rapids above. A DNR creel census guy saw my truck on the road and came in to find me, mentioning I was the only one on the river and reminded me there was no one around to help if I had troubles, so I ought be careful. 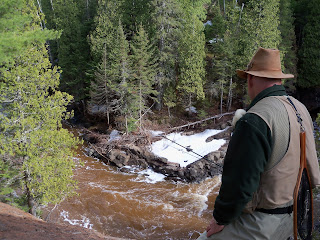 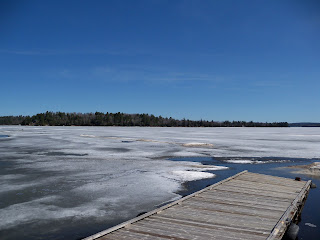 Walleye opener saw frozen lakes and high winds with snow squalls. There were white-out conditions at my place that I watched comfortably peering out the window with a cup of hot coffee in my hand. A few days later I paddled my canoe up a local river to try for some eaters below the rapids. It took forty-five minutes of paddling to get there flushing ducks, geese and swans along the way and listening to drumming grouse in the woods. At the hole I hoped would be full of walleyes, I caught one. No more. There are all kinds of ways to cook walleyes, but fried for breakfast is hard to beat when there’s only one.

Back on the Shore a couple of days ago. Same river, lower water. Better conditions and other anglers. Gorgeous day. On Minnesota’s North Shore all steelhead must be released. Now, I catch heck from some of my catch-and-eat friends wondering why I’d drive a couple of hours only to release fish, but I don’t generally care to try to explain my reasons for sport any more than I want to get into a gun control argument with, well… you know. But I do have a dilemma. I like photos and when I’m about to release a fish I’m always concerned about getting it back in the water healthy.

I recently read a fishing report that complained of anglers over playing and fighting steelhead to death, then kicking the fish onto the bank for a photo. That is wasteful and shameful, of course and I don’t get it, but it’s led me to re-examine my own methods of fish photography.  So far I believe I’m doing OK, because the trout I put back in the water take off under power. I managed to get a shot of one steelhead but it took some planning. I had hooked two from a pool I was fishing and believed I could get another so I had my camera out and set on a little pocket tripod, ready for action. That alone should have jinxed me but the Red Gods were smiling and I did indeed catch another. These steelhead are real fighters and I know why so many are attracted to the sport, and after the exciting battle I’d had him close enough to land by hand. It took one hand around the tail of the fish and one to press the camera button, then I lifted him out and tried to be in front of the camera when the shutter tripped. The fish nearly struggled out of my hands but I got the shot and lowered the fish to the river healthy and strong. I’ve actually used this shortcut before, having the camera out and waiting on the river bank. One day I’ll forget and leave it perched on a rock.

When I reviewed the photo later I see that I cut the fishes head from the photo, but I can’t tell you how many times I’ve photographed the top of my hat, or my knees, or the trees, etc. trying to get a self-portrait ‘cause I’m usually alone when I try this stuff. I like photos of fish next to the bank alongside a net or reel for perspective, but this steelhead was too large for my trout net and would no way hold still for a photo in shallow water next to a reel. Sometimes it all works out and you have a photo where you didn’t cut your head off, it’s in focus, your eyes are open and you don’t look too dorky, and you can see at least most of the fish. That’s the kind you can look at years from now and recall the day fondly. That’s what it’s about. On the other hand you can save a lot of frustration by leaving the camera alone and purely enjoying the angling. Besides, a photo can ruin a good story, “Hey, that thing is nowhere near 30 inches!” and wreck your credibility for the whole year. 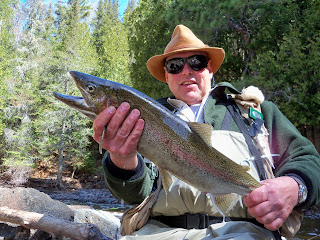 And while I’m on the subject of self-portraits this is my favorite story: I was sharing a deer camp with Tony and Rich some years ago and Rich killed a fine 10 pointer the first morning. He got it to his SUV but couldn’t get it on the tailgate until a couple of local guys came by and stopped to help him. They lifted the deer and held it while Rich tied it on with rope. Rich was returning to camp with his prize but decided to stop at a scenic clearing and take a photo of himself and his buck. He dropped the animal to the ground and posed himself in front of his camera. Satisfied with the shot he found himself once again in need of help loading the deer onto his tailgate. Of course the truck that stopped was manned by the same two guys who’d helped before, only this time they tied the buck on themselves.

In a week I’ll be heading for Montana rainbows and then a trip to canoe country looking for that big bass. Yep, spring is here.