OK, I was wrong. Or maybe I was right. Perhaps it was being right by being wrong. Looking forward to our Montana fishing trip I tied up a bunch of flies hoping at least one of them would be the answer and I'd be pulling in big trout while sharing that certain fly with my companions, thus making me the hero. Past experience, however, has proven my best intentions and efforts are often for naught. It seems no matter what patterns are tied there is always some new hot fly that catches all the fish, and I don't have it. So, to put it simply: I tied flies suspecting they would be wrong, and I was right. 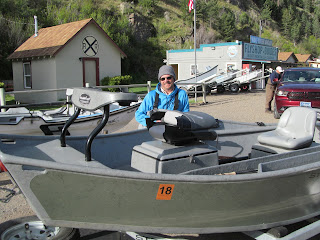 Our cabin was located one other cabin and three trailered drift boats away from the fly shop, so a short morning stroll for coffee and advice seemed routine. I've said it before – folks running fly shops have to make money, but they won't try it by selling you a pig-in-a-poke. They can't guarantee anything, but I've come to learn their suggestions are mighty close to fly fishing gospel. If you don't wanna' ask outright, listen for the subtle, like when we were peering over the massive fly trays and someone mentioned they were almost out of #16 Rainbow Warriors, the guy behind the counter smiled and said, “There's a reason for that.” If there was a downside it was that the river was higher than I'd ever seen it the few other times I've fished it. There were bugs on the water, bwo's and midges, and a few caddis hatches but the trout were just not rising. It's hard to know if anyone actually knew why but the water level got the blame. Seemed reasonable. So we fished nymphs and tossed steamers.

I'm impressed with sixteen inch trout every time, but those were the exception. The trout we caught were thick and strong and we taped plenty that made the 20 inch range. A few ran an inch less, and a few were several inches more but it's the size of the fight that gets your heart thumpin' and it didn't take long to realize a 5x tippet wasn't going to cut it on those jumping Missouri River rainbows and deep pulling browns. 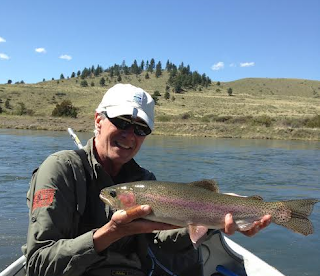 Days on the river with good friends; great suppers grilled outdoors; fine whiskey and stories makes for easy sleep and sweet dreams, and so another Montana trip is in the books. 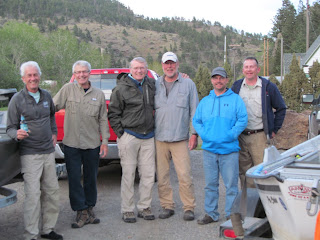 The first time I went to Montana I brought my three English setters, a shotgun, a fly rod and backpacking gear. The mission was to meet up with some friends from Wisconsin and Idaho for some early season sharptail grouse hunting. I was to drive to Culbertson to purchase a license from the hardware store then drive north watching for a roadside information sign that would have a handwritten note tacked to it with the directions to our camp location. There were no cell phones in those days, so if I didn't find the sign or note there'd be no way to contact those friends I was to meet. That's how it was done then and no one thought a thing about it – heck, it was simple, what could go wrong?


After driving to the other side of Minnesota I crossed North Dakota only stopping for gas and letting the dogs air out. Montana highways had no speed limit in those days and I spotted a half dozen white crosses along the ditch in the first few miles of that two lane Big Sky highway. Some six hundred miles from home I parked in front of the bank in Culbertson and walked over to the store. The gal selling my license invited me to some sort of round-up/festival the town was having that weekend. Sounded fun but I had other plans.


Northbound I found the sign and note, then camp and companions, and after several days of good shooting, good food, and sleeping under the stars we split up to head home. Except I didn't. I hadn't seen enough of Montana so I headed west to the Rockies for several days of backpacking with my dogs.


Good memories were made, but two events stand out from that trip. On the first day hunting I shot a true triple with a borrowed auto-loader over my pointing setter, and in the mountains I found a little alpine lake that I fished without results. On my way back out I ran into an old cowboy who liked my dogs. For some reason I confessed I'd been fishing without a Montana fishing license and he surprised me stating I didn't need one. So I'm thinking, Montana – no speed limit, legally drink a beer while driving, and no need for a fishing license! "No," the old-timer explained, “You don't need a Montana license, you're in Wyoming.”


Since that trip I've been out west a number of times, always for the fishing. I've had the pleasure of angling on a number of fine Montana trout rivers. Some were big, wide and strong and others meandered lazily through the landscape and a short cast would have your fly on the far bank. They all held trout in numbers I'd never seen.


In preparation for the first western fly fishing trip, I did a minimal amount of research and concluded the elk hair caddis was the dry fly to have. So I tied a box full and another box with an assortment of standard nymphs and hoped I wouldn't wear out my net the first day. It was the biggest case of over-confidence since Custer stood at Little Big Horn and told his troops not to take any prisoners.


It turned out I was sort of on the right track with the caddis flies, but it took helpful folk at a friendly fly shop to steer me to the correct species of caddis. That's when I started catching fish and realized it's not only OK to seek some advice, it's a darn good idea. I tie flies for every trip and sometimes have a few of the right ones, but don't rely on this years flies to work on next years fish. There was the time on a spring blue-wing-olive hatch that I caught fish on a #20 imitation with a white post wing. So I tied a bunch for the next year but the fish wouldn't touch 'em. The fly shop guys showed me what was working so naturally I bought some and caught trout with their #20 bwo tied with a black wing. Hhhmmm, go figure. 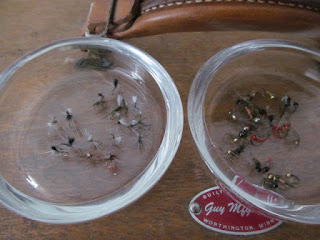 This time next week the boys and I will be trout fishing in Montana. Road tripping with a couple of driftboats in tow, our cabin is waiting and I'm looking forward to it. I'm tying some flies for the trip – drys, emergers, nymphs, midges, etc. I'll go down to size 20 but between fat rough fingers and tired eyesight they never turn out all that well so it's likely some money will be exchanged at the fly shop. Still, I have to believe some of my stuff will work, it always has. I actually have quite a few flies left over from past trips so I probably don't need many more, but there's inspiration that comes from the tying along with picturing one of those flies lodged in the corner of a 20-incher's mouth.