I woke to a light rain drumming my tent, but it wasn’t enough to keep the wild turkeys from announcing the beginning of another day. I’d slept the night through and was happy and peaceful camped there in Trout Valley. I was in southeast MN trout stream country and had enjoyed catching and releasing brown trout on my hand-tied flies the day before. Cold, spring fed water lapped around my light waders and kept me feeling cool on the hot, sunny day. Even my casting was going well, and I was thinking I was doing exactly what I was meant to do. 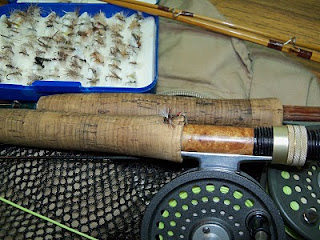 I grew up fishing those very streams with an old bamboo rod of my grandfather’s until I could put together enough muskrat trapping money for the ultra-light spinning outfit that appeared so deadly. In my younger days I suppose it was more important for me to catch fish by whatever method seemed easiest, and the more and bigger the better. But it wasn’t long away from those crystal clear spring-fed creeks and rivers before I missed the activity and satisfaction of casting a tiny fly from a decent fly rod. I’ve visited those streams sparingly over the years, mostly during the winter catch & release season, but I hadn’t camped in that country since I was in high school.


I still remember the day when the river called louder than the school bell so I drove my old ’54 Ford pickup down into the Whitewater valley and spent the day in the company of hardwood trees and sunshine and trout rather than teachers and the walls of a building. On my drive home I noticed a familiar looking car on the side of the road but forgot it quickly, trying to come up with a story of how I came from school with a creel full of trout that Mom might believe. The next morning a shop teacher pulled me aside as I entered his class and told me to grab a floor jack and air tank and go and fetch his car. Seems it had a flat and the spare was also without air. I asked where I might find his car and he exclaimed, “You know darn well where my car is because I took the day off to go fishing and when I finished I saw your truck down on the south branch!” He was on to me. “You must have driven past it on your way home! Take one of your buddies with you,” he added. So Ken Stock and I spent our class that day retrieving a teacher’s car. You’d think a shop instructor would have his vehicle in good repair. Anyway, I doubt there are many teachers like that, anymore. That’s too bad.


The rain was letting up while my coffee was boiling and I pulled on my waders and rain jacket for the morning fishing. A quick breakfast and I headed to the south branch, that same water I was caught playing hooky on those years back. On the stream I was casting a small dry fly into riffles, mimicking the technique I was successful with the evening before, when I spotted a rising fish in a slick pool just upstream. After a careful stalk I cast to lay my line just short of the fish, hoping not to spook it yet getting the drift just right to tempt the trout. The fourth cast worked and I had the fish on! It was the biggest of the trip and a great way to cap the morning. I posed the fish for a moment lying in the net and took photos to add to the other beautiful shots I taken of the trout, turkeys, and river valley scenes that I’d missed for so long. Then I bent to remove the hook from the trout’s lip and dropped my camera into the river. It was swept away in an instant. I splashed downstream hoping against hope to see it tumbling in the current, but to no avail. I stood bemoaning my misfortune when my net and rod came shooting by! A quick lunge and I saved them, at least.


After a couple of days of feeling like an accomplished, sophisticated fly angler who knows what he’s doing -- dropping my camera made me realize those hours fishing and camping were a gift I’d be wise to accept with humility, because I can still be just a clumsy, bumbling fool.
Posted by Al R. at 3:06 PM No comments: