I didn’t recognize my bag when it first appeared on the luggage carousel. Oh, it was the right color all right, but there was an unfamiliar pattern over the bright purple duffel that looked almost like a floral print. From a distance, that is. Apparently, my bag had fallen off the airport luggage wagon and landed in a tire’s path. It must have scrunched down the side of the bag pretty hard to leave such a print, but other than a dime-sized hole there was no real damage. Besides some clothing and sundries, my fishing gear was in the bag. Waders, boots, three reels, fly boxes, etc., along with a few pounds of venison jerky and a good bottle of bourbon that, had any of it not survived, would have caused a real hardship for the next few days.


A bad omen to the start of a fishing trip? Perhaps, but only if I’d lingered on it. As it was, I forgot about it in eagerness to go fishing and tossed the bag into the car for the trip to the river. 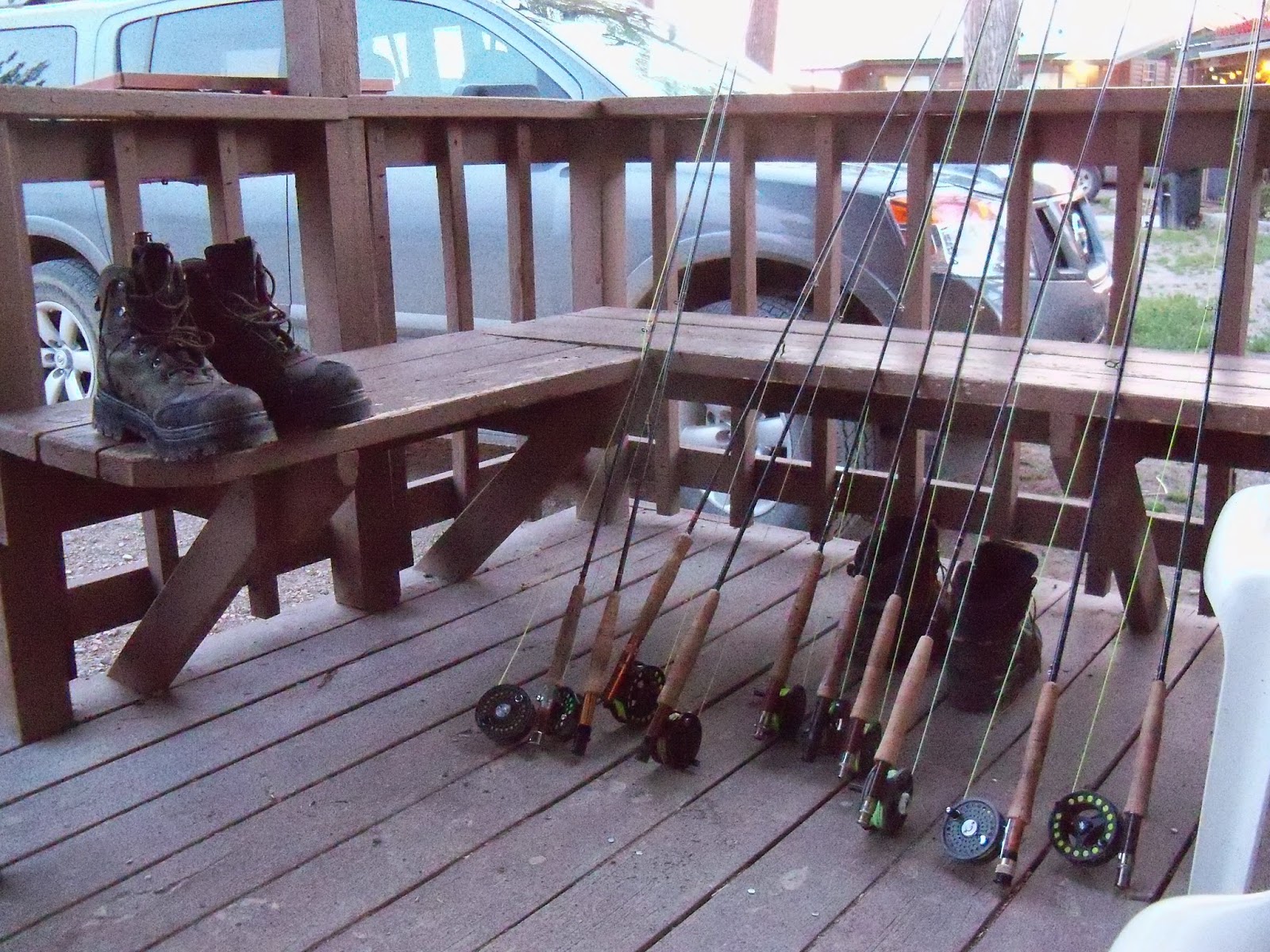 It’s kind of neat being in a Montana airport carrying rod tubes. Most everyone knows what you’re up to, and strangers smile when you walk by. On your way to the river folks will ask where you’re heading and wish you luck. On the way home with sunburned arms and faces, a heavy stubble of whiskers and a tired but satisfied look in your eyes, they ask how the fishing was. You may look like a bum, but you don’t look like a terrorist. 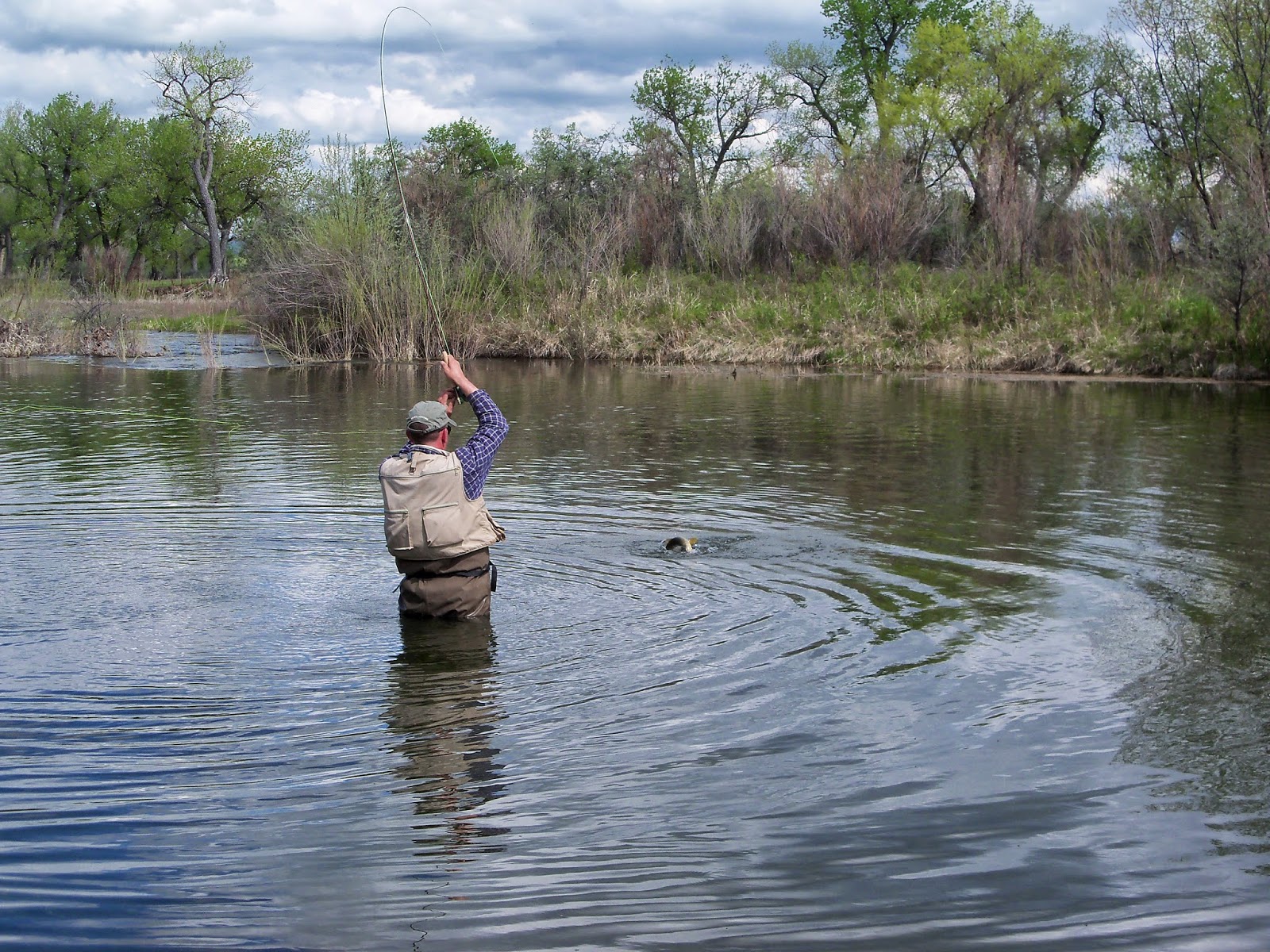 Scott and I met Brent, John, and Brett at camp. The trio of them road-tripped out, pulling the boats, the grub, and the beer. It didn’t take long to get on the river. The water was higher, faster, and colder than last year. Wade fishing wasn’t as easy, but wasn’t as tough as we’d been led to believe. Bugs weren’t hatching much and rising fish were rare, but we found them. The routine was feast down a big breakfast, launch the boats and drift weighted nymphs to a likely looking bend or point or island where we’d get out and wade the banks slinging our rigs upriver to dead drift them past and down. Fun and easy stuff with snowcapped mountains in the background. When we found fish feeding on top we’d switch to dry flies and have a go at them. We found one hotspot where the trout were rising almost non-stop and spent a sunny afternoon taking turns casting dries to them. Sitting in a warm grassy meadow eating lunch and watching your partners trying to choose the right fly, then make the right cast, and then whooping encouragement when a fish was hooked was almost as much fun as the catching itself. There were some downright hilarious moments, too, but you had to be there to appreciate them. We caught trout up and down the river with every method we tried, beautiful browns and rainbows, but that one afternoon will be remembered for a long time. 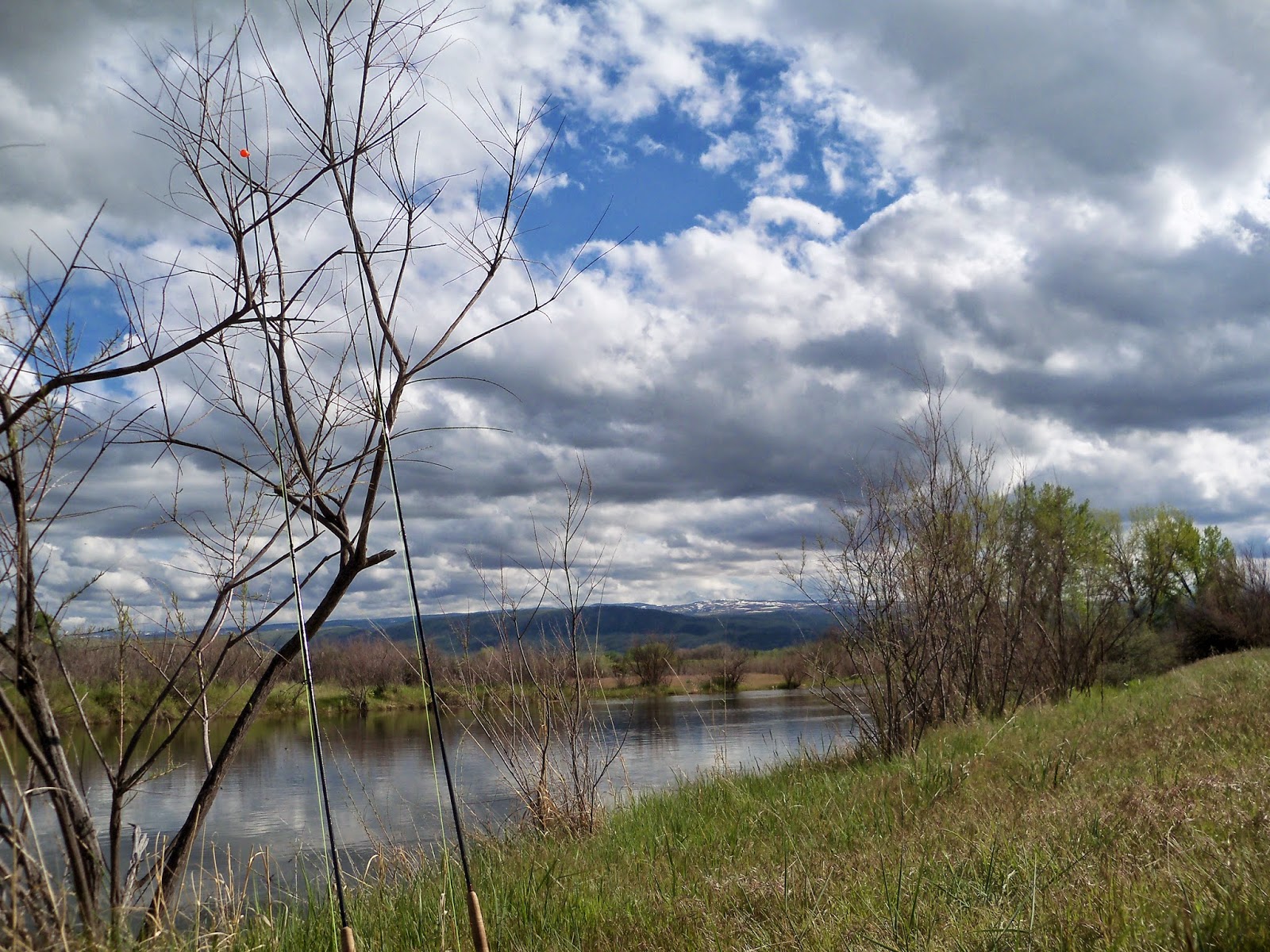 It was nearly dark each night we left the river and returned to camp for supper. Scott’s fresh eggs were the breakfast hit, and Brent’s venison backstrap with John’s garden asparagus won the dinner award. We sipped whiskey and told stories until one by one, we drifted away to bed. Before I hit the rack, however, I’d spend a few minutes outside, in silence, just looking at the Montana sky – and give thanks. 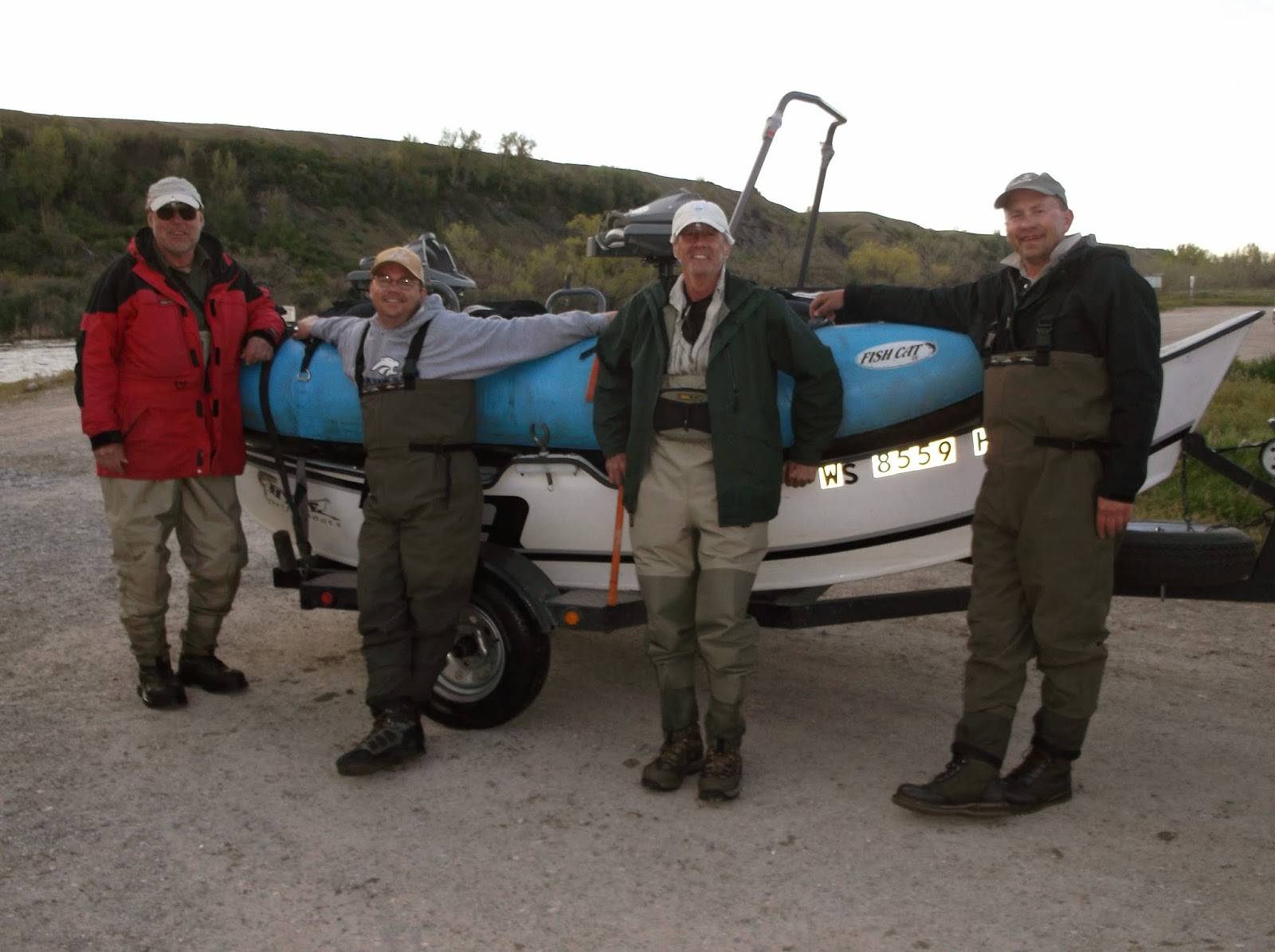 It’s a beautiful Wednesday morning. The sun is rising and will soon melt the light frost covering my deck and yard. It’s one of the few mornings we’ve had lately that wasn’t gloomy. The weatherman, however, tells us we may get more rain this afternoon. No surprise there. It seems like it’s been raining ever since it stopped snowing! I’m skipping work today and pretty soon I’ll go to town and have brunch with Dad, but for now the dogs are romping around the yard, the coffee is hot and strong and I’m thinking about the weekend coming. And fishing.

Gierach said, “I have to go fishing, it’s my job.” C’mon man, how does that make the rest of us feel? I, for one, am darned envious if not outright crazy jealous! It gets worse, too, when he goes on to explain how his travel costs, fishing gear, rods, vehicle, and about everything else he has or uses is a tax write-off. What?! So, I have to wonder, does all his fishing cost him anything? I’m a simple guy and I don’t really know how this write-off stuff works because I what I can write-off is basically, well… nothing. Still, the idea of travelling the country fly fishing the best of the best for a living is a fine and worthy fantasy.


Saturday I’m heading for Montana with good friends and we’ll be doing our best to catch some trout. I’m doing the usual procrastinating about packing, and when I get serious about it I’ll end up throwing stuff in my duffel and trying to figure out what I’m forgetting, i.e. find my polarized glasses and fishing hat in the clutter of my truck. And I know where I left my camera, I wonder if it’s still there? That’s how I do it. We’re taking plenty of food, plenty of gear (despite what I forget), and two drift boats. Last night I was checking out my reels and tonight I’m figuring to condense my fly boxes and take only what I’ll think I’ll need. I’ll likely be wrong and end up buying the right flies when we get there, but that’s part of the fun and I enjoy looking through a fly shop. The fly shop folks are friendly and helpful, even though they probably spot me as a clueless tourist, but it’s guys like me that keep them in business, so it’s a mutually beneficial relationship.