I really don’t know if Trout Camp went the way that anyone expected or not. I have to believe it was pretty close, because I doubt anyone had much for preconceived ideas about it, anyway. I know it took me longer to make the 300-mile drive than I expected. I worked a long day in the Duluth area in an effort to repair, however temporarily, some of the recently flood-damaged roads so folks could leave their homes and get to where ever they had to go. But the spring-fed trout streams of southern Minnesota beckoned and my plan had been laid. I took off south by late afternoon and settled back on cruise control. The weather lady on the radio announced expected temperatures nearing 100 degrees the next day but I figured I’d be standing in cool water so how bad could it be?

I usually get a little anxious on approaching Minneapolis/St. Paul. The traffic becomes far heavier than this old country boy is accustomed to and those lit-up signs warning of construction, accidents, and stopped traffic ahead are a pain. I generally know where I’m going but when I’m warned of a crash eight miles ahead/take alternate routes, well… what the hell now? Of course, the shortest and quickest route required me to merge into bumper-to-bumper traffic and cross maybe four more lanes to exit on the southbound highway a quarter mile away. Yeah, I missed that one. But still, once on the southside and leaving the metro area I found myself relaxing a bit and looking forward to the scenery along the Mississippi River.

There’s a liquor store I like to stop at in Lake City. A few years ago the town was undergoing some riverfront urban renewal with lots of brickwork, scenic drives, and curvy walkways. All quaint and good-looking work. Anyway, I parked near the door and paused to look at some of the brick façade going on the liquor store. One of the three masons on the scaffold asked which of the two colored bricks I liked best for trimming the window openings. Yep, if you’re ever down there, I had a hand in that! The walk-in cooler in the store was the last time I’d feel chilly for awhile, and I enjoyed it while I could – though you can’t stay in a store’s beer-filled walk-in cooler for too long before someone comes checking on you.


I found my campsite and set my tent next to a tiny brook trout stream with just enough daylight left to make a few unfruitful but indulgent casts. There I was, trout fishing!

The last time I camped there I woke to gobbling turkeys and light rain. This time there was a welcomed breeze that took away some of the evenings humidity and heat. I was on the water before most people were out of bed and stood in the river below a pool I’ve had luck in before. A comfortable breeze was coming down the river and just strong enough to pay attention to. There was only an occasional rise along the far bank so I plied the near water first. I drifted a favored 16 Dark River (for no good reason other than it’s what I caught ‘em on here before) dry fly through the riffles and over the head of the pool drawing no attention. No luck with a nymph, either. The pool below is long and broad and a good place to swing a streamer so I confidently tied on my choice number 12 wooly bugger and had a nice brown trout on minutes later. Finally I put several dries to the far bank to no avail, even though the riser was coming up now and then for who knows what. I worked my way upstream for awhile as the sun came up and the temp started to climb. Then I drove into town and found some coffee before heading for another branch of the river that I first fished as a young boy. 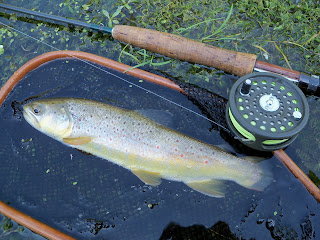 The day was warming fast and I noticed grasshoppers in the ditch where I parked my truck. Hmmm… something to keep in mind. There was no one else around and I had the river. My Gold Marten nymph took the biggest brown from an undercut bank, and though it wasn’t fast and furious, I caught trout regularly throughout the morning. When I found another one of those slow rising fish, I plopped a hopper imitation close to the bank and the trout took it. Nice! It was getting close to lunchtime when I drove back to town to see if I could locate Scott or any of the others in the crew.


One of the neat things about being in the river valley is no cell phone service. In my youth I took great pleasure in loading camping gear in my old truck and disappearing for a time – I’d missed the hippie generation by some years, but I still liked the idea of stickin’ it to the man and livin’ free. That’s hard to do if your boss, your mate, or anyone else can give you a call anywhere, anytime to see how it’s going. I know I’m something of a retro grouch, but if Big Brother wants to know what I’m up to he will have to come looking. Later I spent a few years specializing in solo wilderness canoeing and paddled hundreds of miles in Minnesota and Canada totally out of touch with anyone and, believe me, your behavior and actions turn pretty scrupulous when there’s no one, and no way to call for help. But when you get back to civilization you know you’ve at least done something and there never seemed like much risk involved at all.


On this trip I wasn’t so much trying to be free as I was trying to do a little fishing with some buddies, so I drove up to the farm country, dug my phone out of my pack and turned it on to get a message from Scott. A short time later we were having lunch and a beer at Mauer Bros. 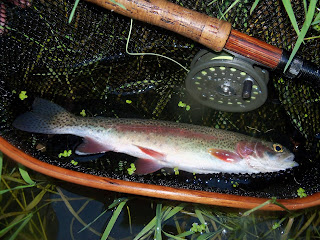 We met up with Brett and Brent for the evening fishing in conditions that were, for me, miserably hot and humid. Everyone caught trout, mostly on nymphs, I think, but also some dry flys and yes, hopper imitations. My last fish of the evening came on a pheasant tail nymph, the only rainbow I caught. A nice buck deer came down to the river to see what I was up to, and a big flock of turkeys startled the heck out of me when I flushed them in the woods going back to the truck. Cocktails in camp, a visiting raccoon, a leaky air mattress for a bed, more fishing in the morning, a disintegrated wading boot, a tasty tailgate lunch, and before I knew it I was driving north for home. Can’t wait ‘till next time!