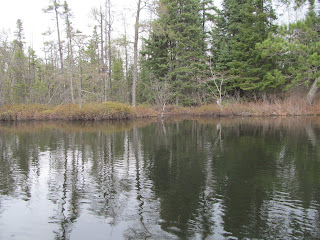 Thanks to the availability of the Internet's public forum I suppose there is someone writing something about everything you could imagine, but I mostly limit myself to the outdoorsy stuff, you know, hunting and fishing and such. One of the blogs I like to keep up with is Ralph's Fly Box. Now I don't know Ralph personally, but it's plain he is a fly fisherman and he ties some nice looking flies that look attractive to me and he posts the recipes and how-to videos. Of course if we all tied just one example of every fly available over the Net we'd fill more boxes than we'd have room for, so we gotta' pick and choose. I tie many poppers but Ralph's X-Gurgler is a little different and seemed like something I should try so I tied up a few and spent a couple of hours on a couple of little lakes with a light rod and canoe. 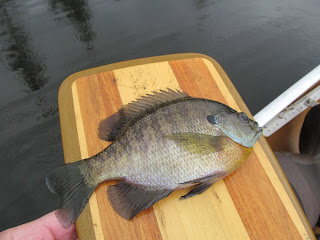 Here in the northland it's still early season and the water is cold, so I had no high expectations but fishing is better than not fishing and I hoped the bluegills would be hitting on top. As usual, I was alone on the lake except for the nesting loon I came upon. 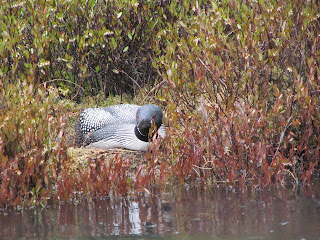 The noise a 'gill makes when it takes a surface fly is like no other and those little fish fight like the dickens, especially when they're the good sized bluegills the gurgler was attracting. I'm a pretty big guy with big hands – my buddies say I make a good fish look small when I hold it, so a bluegill that fills my palm is a good one! 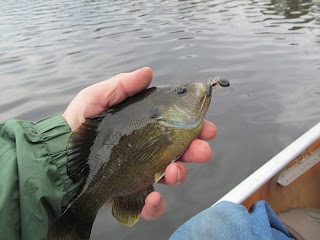 I can't say I've ever had faster action and I lost track of just how many I caught. A cast over any log or brush pile, a twitch or two, and fish on! I tied that fly in a couple of colors but the original black and grizzle hackle was the ticket, though a brown foam/brown hackle did OK, too. The lake I was on holds some pretty good bass, but they just weren't home that day.

The next day on a different lake that same gurgler found the bass. I've never landed a real big fish from that lake, but steady action keeps things fun and interesting. 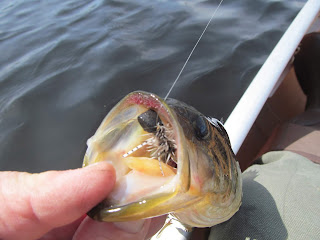 So Ralph, your X-Gurgler works here up north, too. Thanks for the fun!

The cure for Spring fever comes hard when we get a snow shower every week. Last night we got a couple inches. Sixty miles south the poor folks received nearly a foot, and here it is over a week into May.


While some folks are complaining and claiming disappointment, depression, and all sorts of ill will about the weather, no one seems in a hurry to leave despite the threats of doing so. I recently read a posting on social media from a fellow who stated, with arrogant authority, that anyone who retired and lived anywhere but Florida should have their heads examined. Well, I hope that dude enjoys his year-round shuffleboard and bingo, but I like it here and I believe I'll stay.


Though it hasn't been exactly “April showers bring May flowers” weather, Spring has arrived. Our pond is over it's banks and creeping into the yard from snow-melt. It's been visited by colorful mallards, and blue-wing and green-wing teal looking for a nest sight. Grouse are drumming daily and snipe are whooping it up overhead. Birds are singing, woodcock are peenting, and geese are honking. The ice is off the lakes and streams are flowing deep. There are herds of deer in the hayfields munching on new tender shoots poking up.


I've tied up some new flies (perhaps better described as “creations”) for the upcoming bass and muskie season and a few small panfish offerings I wanted to try on a near-by lake. So I pulled my canoe out of the shed and went to strap in down on my truck when I noticed the hull was cracked in several places. I got hold of a buddy who's a factory rep for the canoe builder and got some answers as to why it cracked and how to repair it. Of course the sight of my broken canoe was disappointing, and though I suppose I could have ordered the special epoxy from Amazon, there's a marine supply in Duluth that handles it and a trip to Duluth could provide a reason to drive up the shore to check out the steelhead rivers. The canoe needs fixing, sure, but first things first. Yesterday I left the store with my glue and pointed my truck for the North Shore.


It was cloudy, lightly raining, and 46 degrees. I went to a favorite river and was surprised to see only a couple of cars parked at the access. After donning waders and gear I hiked the half-mile into the river and was even happier to see no one around. I descended the steep and slippery hill down to the water partway in an exciting slide on my backside and was happy for no witnesses. I don't think it was all that graceful. 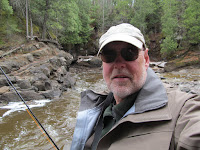 I spotted two steelhead immediately in a shallow run and followed them up to deeper water. For an hour I worked the water up and down, holes and runs, with yarn egg patterns to no avail. Most of the steelhead I've taken have been on nymphs – I sometimes wonder why I ever try eggs. It wasn't long after I knotted on a #14 Prince that I was into a fish. A good battle in a good pool, I suddenly wouldn't have minded someone watching. I snapped a quick photo before slipping it back to the river. It wasn't the biggest fish I've seen, but it's the first of the year and a good one to start with.


I fished awhile longer without action and more anglers started showing up. If I left then I could make it home for supper, and I still had to get up that darn hill. 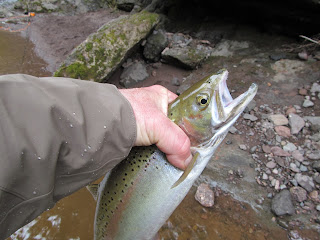