and there were always birds…

Anticipation grows faster than the last days of summer disappear, and maple leaves turn red overnight while that first frost wreaks havoc on our last hanging tomatoes, but by now there’s no surprise – it happens every year, and all we can think about is grouse hunting. 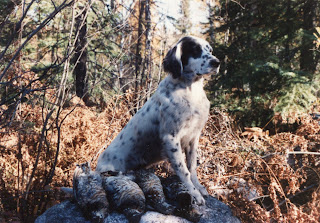 I can’t say the start of the season has been anything fantastic or epic – other than the weather, which has been for the most part ideal. The trouble with great weather is I can’t use it as an excuse for poor hunting on my part. And though I’ve only been out a few times in cover that is close but heavily used, at least I can say I’ve brought home enough game to share a good meal with Dad.

I usually start the season on the forest road near here. That’s because the first days grouse hunting are never the best days, and I like to save what I think of my better covers, which are farther away, for a bit later in the season when some of the leaves have fallen. But I like that forest road. I can hunt the morning, run home for lunch, and return for the afternoon. There was a time when I could park near the trailhead and walk down the middle of that road and have the dogs work ahead. It was nothing more than a two-track then and the rare vehicle that came by had four-wheel drive and was moving slowly. That forest road has been rebuilt and now days its common for tiny little cars to come tearing by at near highway speeds. Of course along with the good road came the inevitable crowds. There’s a good amount of public land to hunt along the road so it’s a magnet for bird and deer hunters alike. Add a couple of decent duck lakes and ponds so there’s some more traffic and it gets kind of crazy out there. Although it’s still a gravel road and can get real dusty, it’s an absolutely beautiful drive this time of year and this morning I watched three happy folks climb out of their mini van to photograph the fall colors. 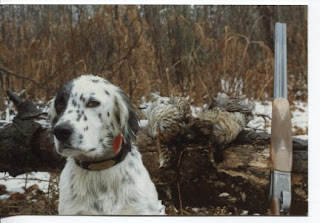 Everyone is out there to enjoy some kind of outdoor experience so we're all pretty cordial about the whole thing and usually wave at a passing vehicle and pull over to let faster vehicles go by. And so far there’s still a kind of etiquette (however grudgingly) about staying away from a cover that’s already occupied. It’s common sense, really; when you park your truck at the head of one of the many offshoot trails you should be able to feel a sense of propriety. Now and then I’ve came across other hunters in the same area because trails come from different directions but it’s not necessarily a bad thing to share a little conversation with like-minded people. Like I said, we’re all out there for some kind of enjoyment, and hunting may be an alibi for a walk in the autumn woods. 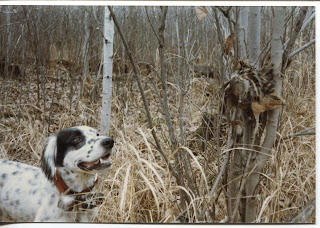 Despite the increased pressure, I can almost always find some birds to shoot at. That’s only because my dogs get out where most don’t to find birds. Yet this season, so far, has been pretty slow in terms of flush rates, but I haven’t yet hunted anywhere but off that forest road and I know there are no secret places there. So when the hunting turns into hiking I can’t help but recall all the grouse and woodcock I’ve taken from the coverts along that one forest road. There was a time when my shooting could stand up with anyone and my setters seemed to find birds where there were none. Maybe it’s the outdoorsman’s memory that seems to paint the past a little brighter than perhaps it really was, but I’d give a lot to hunt over Cully, Molly, or Mayday once again. 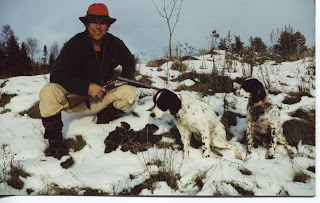 Already leaves are turning colors letting us know autumn will soon be here, the best time of year for many of us. The cool nights are welcome and the last couple of days I donned clothing more substantial than shorts and a tee. This morning I killed a few training birds for the dogs in a last ditch tune-up effort before grouse season opens in a week. Then I scouted potential fox and coyote trapping sites and while out there enjoying the absolutely beautiful day I saw and heard geese and sandhill cranes overhead. The other day I stopped for a brood of ten young grouse on the road, all old enough to fly but still not adult size, about to get some tough lessons come Saturday. The Fall season is fast approaching and we'll do all we can to relish it, 'cause you know what comes after that! Even though I’m more than eager to grab a shotgun and follow a bird dog, I can’t help but feel like these last days of summer are slipping away quicker than dollar bills in a strip joint. I’d certainly like to spend some more time in waders waving a fly rod, and the regular stream trout seasons closes in a week so I need to get to it. I’d be happy to make one more trip and fry up some fresh trout in sight of the river they came from. It only takes a few minutes to throw my camp gear and rod and waders in the truck…

I have a small collection of poetry that I dug into a little bit the other night; kind of curious ‘cause it’s been a while since I’ve seen any of it and I wondered how my perceptions might have changed. Not surprisingly, in my often esoteric way of thinking, most themes around nature and outdoors, from Emerson’s deep transcendental essays, Thoreau’s woodsy philosophy, to the rhyming tales of the Klondike by Robert Service. Some is classic. Some is more contemporary, written by mostly unheard of authors. Of what I read, and with fishing still on my mind, there were a couple of poems I liked a lot. Here’s one that seems right:


Sometimes a guide, he knows the water well.
You can see his place from the river, unpainted
kind of rough looking.
On the screened porch fly rods stand
in a milk can.
There's hardly any furniture
but a hell of a stereo.

The gray in his three-day beard makes
him look older, although
he is not a young man anymore.
His right hand is wrapped around
a whiskey glass, his left is on
the shoulder of a very pretty woman.

Someone asks him what's it all about?
And with a soft grin he answers
"trout," quickly looks at her and winks.

Fishing, of course, is only part of it. 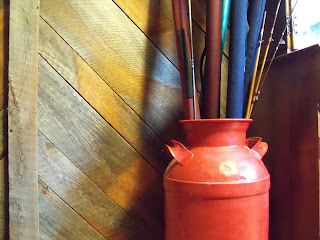