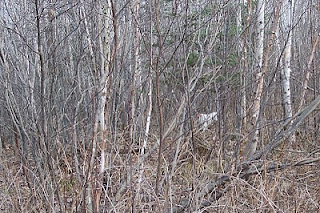 It’s hard to complain when Spring comes early. We’re all eager to enjoy some sunshine and open the windows for some new and fresh air. Robins are hopping around the yard, and ducks and geese are finding the open water. There is still some ice on a few lakes, but the four or five rivers I crossed today are flowing free. There are those who will worry over fire danger, and I suppose there’s truth in that, but I’m going to enjoy things while I can. 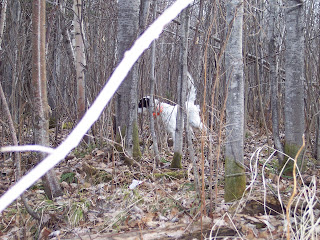 I’m going to be out in these spring woods with a couple of bird dogs who know their business better than I do. As a matter of fact, the setters don’t really need me for much, except I think they take some pride in finding and pointing grouse for me. Someone has to be there to give them a bit of praise, a pat on the head, and a ride home for supper -- and I sure enjoy watching them work so I might as well be the guy following them. 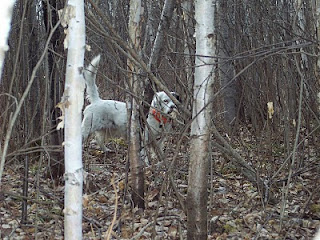 Even in the leafless woods the dogs can be hard to keep track of. Nowadays there are all kinds of electronic devices for the sole purpose of locating bird dogs. There are even GPS units you can buckle on your pup and watch his progress on a handheld screen. I don’t have much of that stuff; partly because I don’t trust batteries, I’m technologically inept, and that stuff costs real money. I do hang a bell from their collars and sometimes have a beeper that will sound off when they stop to point a bird, and that seems enough for me.


I like working dogs in the spring. After a winter’s worth of snow and cold it feels good to walk on good old Mother Earth. The white dogs flashing back and forth in the grey and brown cover are exciting, and when they find a grouse I fire my training pistol over their points. I suppose the dogs just chalk it up as another miss, just like hunting season. Oh, I love the smell of burnt powder, even if it’s from a blank gun! 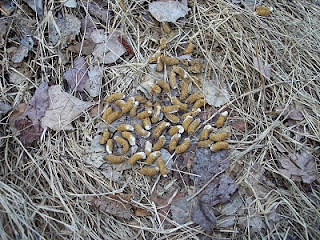 Woodcock are a sure sign of the season and a couple of days ago Ty found the first of the year for us. We don’t find as many as we used to; the little russet fellows are having a harder time surviving these days, so we don’t shoot as many either. But they’re sure fun to work a dog on and, as an indicator species, I’d be right worried if there were none. That same evening I drove to a woods meadow I know of hoping to hear and see a woodcock or two performing their annual mating sky dance. I sat quietly and waited while dusk approached, and heard the high pitched hooting of a saw-whet owl and the snipes “woo-woo-woo” until 7:50 when I heard the unmistakable “PEENT!” Then again, and several more times before the male woodcock took wing and rose up over the meadow and into the clear sky. It was a classic scene under a nearly full rising moon – I watched the bird spiral higher until it was out of sight. Then I heard its twittering chuckle and suddenly the bird shot across before me and settled on the ground to quickly start peenting again. I watched the display several times before deciding all was right with the world, and headed home.
So if you're out exploring some backroad and see a tall, kind of ragged fellow leaning on his truck at a woods clearing with a couple of tired setters in the back, don't be afraid to say hello -- it's just me watching for woodcock.
Posted by Al R. at 8:23 PM No comments: