Coffee. Oh yeah; java, Joe, latte, mocha, espresso. Gotta have it. My mornings aren’t the same without it, and I find myself drinking it through the day, nowadays. I’m a coffee drinker, true, but I’m certainly no caffeine elitist. I savor good coffee, yes, but I drink a lot of gas station stuff ‘cause for one thing it’s usually easy to come by – only in big cities have I seen premium coffee shops at every other traffic light – and another thing is the early morn gal at my usual gas stop doesn’t charge the regulars for coffee. I like that.

Years ago I bought a travel cup from a gas chain that advertised free refills with that cup. I had the cup long enough for them to quit honoring that agreement and when I reminded unknowing attendants I came off sounding like a whiner, so I kept quiet and paid for my refill. There’s another gas/convenient store that I stopped at every morning for a week while I was working in the area. When the owner was there he'd say “get outta here” when I pulled my wallet out. The following mornings I paid various young gals at the register 30 cents, 50 cents, 70 cents, and $1.06. Each morning there was a group of folks sitting at two tables – you know, the local coffee club – who refilled their cups at will. I suppose they had to raise the price as the week went on to pay for the gang helping themselves to freebies. When you pay a buck or more to refill your own cup that had better be some good coffee.

When I’m in a good coffee shop I know I’ll pay more and I know the reasons why, so I’ll leave a tip. There are a bunch of franchises you all know so I won’t try to name them because I actually only know a few of them. There are other private, local, homegrown shops that not only sell and serve specialty coffees, but usually some good eats, too. I’ve been to a number of them in various towns and have always appreciated friendly service and delicious goods, and I admire the folks trying to bring something special and classy to their community. I wish them well ‘cause I’ll want to stop by next time through. 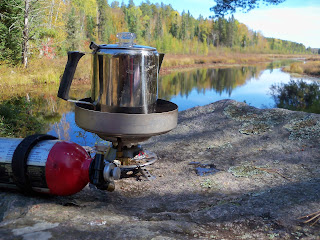 I live with the belief that coffee was invented to make river water taste better. That’s kind of outdated thinking considering today’s java has to come from beans grown on the right mountain or jungle, by the right people who bring it in on the backs of the right donkeys, to be brewed with only the right spring water. Well then, ok, like I said: I drink plenty of coffee that’s fast, convenient, and cheap. That doesn’t mean it’s my favorite.

Coffee is something of a staple for the outdoorsman. It wakes us in the morning and keeps us awake on those long night-time drives we often find ourselves taking. We drink it during the day to quench whatever that unexplainable urge is to have something tasty in our mouths. The smell alone conjures up memories of duck blinds, deer camps, trout streams and all manner of countless happy experiences. And sometimes you just have to brew a pot of coffee to relax and take time for a break. I keep a sealed strongbox in my truck that contains a pot, some coffee grounds, and a camp stove and I can’t tell you the times that fresh brewed coffee has brightened and fortified the day.

There’s a fly shop motto that proclaims “Fight big fish and drink good beer!” I won’t argue with that but my beer drinking tends to parallel my coffee drinking. I like good beer, that’s a fact, but I often open a brew that’s known to be easily affordable, if you catch my drift. And as far as fitting drinkables for the outdoorsman is concerned I’ll admit that a good bourbon is one of life’s finest and most welcome pleasures. Now wait! I know, I know, some folks favor blended whiskey… think “Crown,” which I’ve been known to partake in, or perhaps a little of the Irish when in the right company. Though while I’ve been known to produce a small flask to celebrate a particularly fine fish that’s been landed and a streamside beer can certainly wash down a hearty sandwich, we’ll keep those libations reserved for end of the day compliments when hunting. 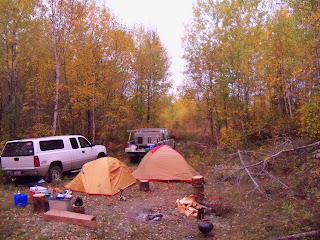 Tony and I partook in some of those evening beverages at an early season grouse camp a month ago and sat around the fire discussing, among other things, good coffee. Tony has access to many of the best known coffee shops and has his favorites ranked in order. I mentioned how I liked our new local shop with their awesome coffees, baristas, décor, and menu but added I really didn’t think I was the kind of guy to hang around a cool coffee shop, no matter how much I like to. Besides, I seldom have the time. Tony agreed that I probably didn’t have time, but he reckoned that I am the kind of guy to hang out there. I took it as a compliment. 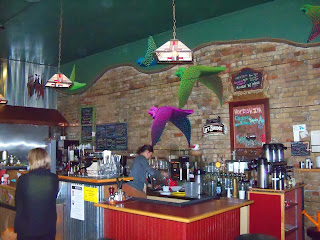