We’re eating walleyes, but we’re lookin’ at trout. At least I am. Fishing on the lakes opened last weekend and Dad and I were out there. It’s not much of a secret where we were. We just fished where everyone else did. There was a lot of pre-season wondering where the walleyes would be, given the early spring we encountered, and it wouldn’t be wrong to say they were everywhere. Or nowhere. When Sunday night rolled around and we pulled the boat out of the water we had fished shallow bays and deep holes, watched opening weekend madness on the lake and at the boat launch, rescued a woman who’d fallen in the lake, were pounded by whitecaps, and I lost a six-dollar Rapala ‘cause I was too foolish to use the net on a big smallmouth bass. But we had enough walleyes for a couple of breakfasts and lunches. If you’ve never had fresh walleye and eggs for breakfast... well, you’re missing something.

We caught ‘em 2 ½ feet deep and in twenty feet of water. It was not fast and furious. I caught the first two minutes on the lake. The next came almost two hours later. The best one was the first Dad caught. He was so excited he never stopped reeling. When the fish came to the surface I was ready with the net but it kept coming and was soon arching through the air as Dad reeled the fish up and I two-handed the net trying to keep it under the fish! When his jig hit the tip-top the walleye dropped off and, luckily, into the net! Funny – gotta love it! We laughed over that one as we ate giant ice-cream cones from the Y-Store on our way home.

The week before I was up at the beaver pond I've talked about. The first evening I had only a couple of hours to fish before dark and my dry fly, a Dark River, wasn’t working on the few fish that were rising. The couple of takes it drew where from tiny fish, likely rainbow chubs but I never hooked one to confirm it.  When the slightest breeze came up all surface action stopped so I tied on a size 12 Wooly Bugger wrapped with purple hackle, determined to catch something with the streamer. I worked my way around the dam, casting all the while and tangling in cattail tops when I let my backcast drop. I was wondering if it was all for naught when my line tightened and the rod throbbed when I set the hook. A wild 14 inch brook trout fought all the way and how I regretted forgetting the camera as I released it back into the pond. That is a fine fish for this water – one I hope survives to catch again. It was the only fish of the evening, but it made my day.

I was back a couple of days later, in a light rain, casting a bead-head Bugger in hopes of seeing the same trout again. I made my way to where a little water spills over the dam into the smallest of secondary dams and wondered if a trout could have trapped itself in that shallow spillway. If so it wouldn’t survive long once the summer heat came, that is if a mink or heron didn’t find it first, so I surveyed the situation for a try. There were high cattails all around and only one way for a backcast. It would need to be high and between a small spruce and a six foot red osier growing up on the main dam. I slid off the dam and down to the head of the pool. I fed line and roll cast some line out, picked it up and caught the brush behind me. Twice. Finally I found the hole for my backcast and laid a perfect cast (mostly luck) over the deepest part of the pool. Two strips of the Bugger and a fish was on! It was a small brookie, but as pretty as they come and I lifted it in my net to release in the main pond above. I couldn’t interest any more with the Bugger, from the little pool nor the main pond, but soon after I knotted a #14 orange scud to my tippet I landed two more little brook trout. I didn’t catch the 14 incher again, I hope it’s still there, but the three little jewels I did catch made me know I was exactly where I belonged. 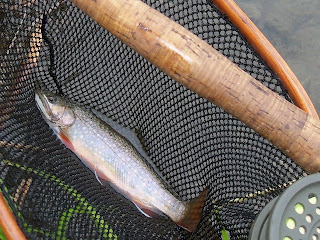 It’s not quite summer yet, and the foliage has a ways to go before it’s in full bloom. The other night I bushwacked into a stream I haven’t visited in years. I thought I could hike in after work and enjoy some time, but the old trail was obliterated with blowdowns and brush and it was 7 o’clock when I finally found the water, and then to discover what I should have remembered, that my fly rod was nearly useless on this brush choked little creek. I dabbled around for awhile and lost a couple of flies to snags both under and above the water, knowing that my little spinning rod at home would have been far more effective, but at least I provided a meal for about a million hungry biting bugs. I left the creek early, with no desire to hike through the brush in the dark, and got back to my truck as the tiny blackflies gave way to the mosquitoes.

I suppose trout fishing around here will go on hold soon. I just got a hot tip on a bass lake I’ve never fished that I'd better get to -- and I’m eager to find and fight some pike on the fly rod, too. But those out-of-the-way trout spots are dear to me, always fun to visit, and easy to think of as mine. And just try to show me something prettier than a wild brook trout! 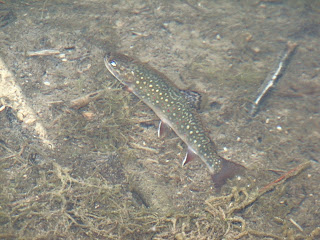