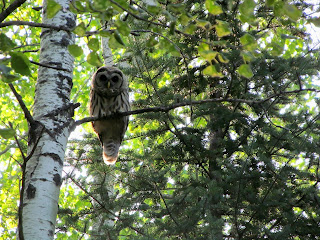 The owl I saw on the hike in seemed like a good omen, though I can't claim being clever enough to outsmart the few trout that were landed. Truth is I was just lucky. Again. The biggest accomplishment of the morning was just making it to the stream. After a fairly easy jaunt through the balsams and spruce I had to cross the old (mostly) dry beaver meadow through waist-deep swamp grasses hiding the many bone-breaking holes and tangles of sticks and logs of past beaver workings. Slow going for sure, but thankfully it was cool enough to wear a jacket and a welcome breeze helped ward off the mosquitoes. 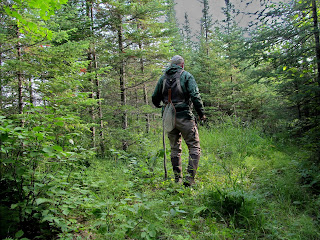 There was no discernible hatch on the water, nothing to indicate a pattern to try, but I knew I'd start with a dry fly. A long time ago an old time brook trout specialist told me to add a little red to my trout flies, and so the Dark River was created. It's really nothing special but a pretty generic mayfly imitation with a bit of red floss added as a tail. It could be a purist's disdain, but it's caught many local brookies as well as browns and rainbows in Minnesota's driftless area. But it wasn't working this day.


I had seen a few grasshoppers on the way in, so a white post parachute hopper was given a chance. These little brookies are not tentative fish. They don't rise from the depths to look over a fly and, if satisfied, sip it in. No, these brave and unsophisticated fish rocket up from the bottom of the pool and hit with abandon if they like what's offered. 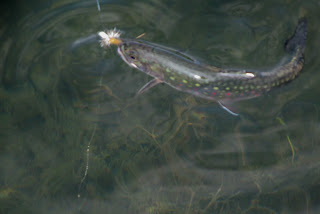 The hopper worked, with a blurry photo for proof, but let's see what else will, too. A western style #14 elk-hair caddis was next and brought a strong strike on the second cast! Another pretty brookie in the net. A couple more on the surface before the high sun had me sweating and I realized several hours had gone by. Several fine hours. 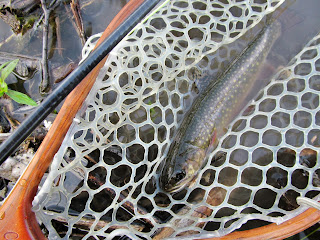