OK, it's spring and there's a lot to like about these springtime early mornings. I'm sipping hot coffee and watching impatient robins hopping about the frosty yard searching out a daybreak meal. Sure, the early bird gets the worm and I'm no expert but my guess is the worms will stay tucked a little deep until the sun knocks the frost from the grass. Still, the robins sing a happy song and seem confident breakfast is on the way. The winter birds have left, though there's always a few resident chickadees around. A flock of juncos are busy under the feeder and a few purple finches stopped by this morning.


We're enjoying a normal spring this year and it's a welcome change from last year when it felt like winter lasted right up to summer. Bright colored mallards sit in water filled ditches and beautiful wood ducks are checking brushy streams and backwoods ponds. Grouse are drumming all day long and it's hard to stay indoors in such inviting weather.


Gabby has been finding grouse and woodcock in good cover daily. I like spring training – it's like October hunting but there's nobody else out there and I don't have to fret over my poor shooting. 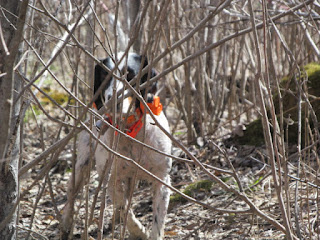 Folks who hunt and train bird dogs live for this kind of spring. Like the trout fisherman who watches the stream open up and settle after the snow-melt, bird dog folks see the snow disappear from favorite covers and turn dogs loose to find returning woodcock and surviving grouse. If there's something better for a young bird dog than spring exposure to wild birds I don't know what it is. 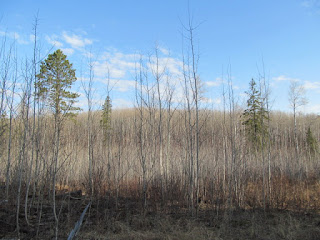 Pencil popple, dog hair aspen – call it what you will – it stirs the soul with a promise of birds after a long winter, and if those thickets go unnoticed by most, all the better. The best of it won't last long so we enjoy it while we can. The grouse and woodcock will be nesting soon, and we'll leave them alone then. But stream trout season opened yesterday, so things should be fine. 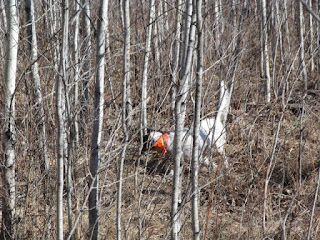 As always, I'm grateful to be living where and how I do. I don't, and won't argue politics or religion with anyone, but it surprises me to hear folks claim not to believe in much of anything other than what's in their immediate grasp. They obviously haven't seen the things I've seen. 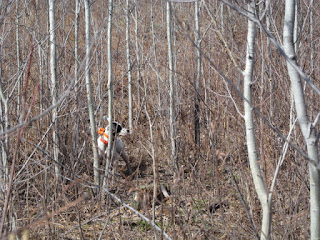 There's always that ting of anxiousness when you make that last turn down to the trailhead leading to the river. It's the middle of the week so you don't expect too many vehicles to be crammed into the small parking area, at least you hope not, but you never know. It's a beautiful spring morning and word is the steelhead have been running for over a week.


I'd heard the weekend crowds were pretty heavy so I was pretty happy to see only two vehicles parked in the lot. It was nearing late morning when I got there so some of the earlybirds had probably come and gone. I was pulling on my waders when another truck pulled up and the lone angler came over to say hello and greet Gabby, who was running around checking things out. He'd been a couple miles downstream that morning and though he wasn't giving up, he'd had no action and figured the run was about over. He said he was going to check a hole downriver and I was quietly relieved he wasn't going the same way I was. Well then, I told him, I'd go up the other way. 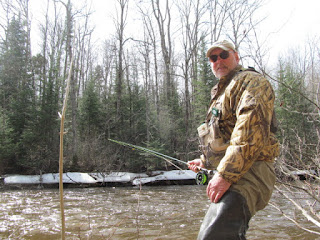 I hiked in and looked down the steep bank at a favorite run I like to fish and was a little surprised no one was in it. After a clumsy clamor down the hill I stepped into the river between  the snow and ice still hanging on the bank and used a walking stick I remembered to bring for a wading staff. I had to get out in the river a little ways to clear the overhang stream-side brush and I don't dance around those slick rocks as well as I used to so the stick was welcome in the steady current. It hung off my wading belt by a cord while I fished.


A size 14 prince nymph was my choice under a single split shot and and indicator set at about six feet. This rig has worked before for this sort of fishing where the casting is basically slinging it upstream and watch it go by. Slowly working my way upstream I had my eye on a promising hole ahead. The rig seemed to be right, ticking bottom and now and then hanging up. I broke off a couple of nymphs trying to pull free and twice I got lazy and tweaked a hook that straightened on snags. 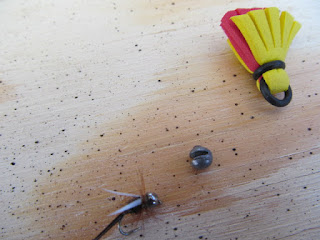 Other than enjoying the sunny day listening to the river and the grouse drumming up in the woods there wasn't much happening and I was thinking about hiking up to another spot. Then it struck! I didn't need an indicator to tell me a fish was on – the line darted sideways and the rod jerked to the steelhead barreling downstream! Fish on! Game on! There's nothing like the thump and tug and when it cleared the water I suddenly wished someone was watching. After some fun minutes I was gaining line and the fish was coming closer – and that's when I realized I'd left my net in the truck. Well, I'd hand land it out in the river, have a look and let it go. I got it to about a rod length away when it pulled deep and was gone. The hook broke. The one I'd bent back with my hemostats. Good going, dummy. Standing in a river feeling like an idiot.


The second steelhead came 30 minutes later, smaller than the first but strong and bright. When it tired I grabbed it's tail and held it up for a look. Without a net to hold it I couldn't mess with the camera, so I lowered it to the river leaving me with just a story. By then I needed to get out of the water and warm up a bit so I hiked back to the truck to see Gabby and get my net. The fellow who came in after me was gone but there were a few other vehicles there. I'd planned to run Gabby on some spring woodcock on the way home, but there was still some time to fish.


I'd already hooked two fish and short of falling in the river there wasn't much that could go wrong with the day, so with net hanging on my back I headed the other way and half slid down the hill into the river to try another promising spot. I tied on a #12 gold marten nymph just to try something different and before long was into a fish. It figures, ready with net and camera for a hero shot of a big steelhead, the third and last fish of the day was a tiny resident trout that hardly covered my palm. Still, catching fish is better than not catching and Gabby found a couple of woodcock and a grouse in some cover on the way north to top off a satisfying full day. 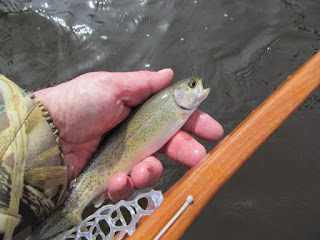