One of my favorite meals, anywhere, is fresh grouse grilled over the coals in camp. My old Smokey Joe has really gotten a workout over the years in grouse camps around the northern part of the state, and with good luck it will keep cooking in the years to come. There's nothing much better than a day hunting over a dog followed by an autumn evening under the stars after a tasty supper of the bounty. Of course a few spuds are welcome, too, and if there were some woodcock for appetizers, well, all the better. I know two real honest-to-goodness outdoor gourmet chefs who can do wonders with wild game, but I've served up a few platters in my time and have yet to get a complaint -- or leftovers for that matter.

In his excellent essay on woodcock, De La Valdene describes his dinner in a French restaurant where he was served the woodcock whole with its head tucked under a wing. It rested on a piece of toasted white bread and a dark puree was spooned over the works. He was encouraged to hold the head by its bill and bite off the top to get at the brain. I’m not sure that would go over very well around here, but he proclaimed the bird delicious. At any rate that kind of cooking is far too complicated for me.

I keep my cooking simple because I'm really not much of a cook. I wouldn't cook at all except for the fact that I like good food and I enjoy a good steak as much as anyone, but I believe wild game deserves a little more respect and care than the everyday U.S.D.A. fare, some of which gets force-fed and drugged and dyed and who knows what else before they wrap the plastic on it and call it "food." I've had too many wild game meals that were ruined by well meaning but inattentive cooks who just can't believe meat can cook that fast. Safety first, right? Cook the heck out of it.

My Rapala knife isn’t just for fish, and a couple of swipes yield two fine pieces of meat off a grouse breast. I have a few marinades I like to use, but laying ‘em on the grill with some s&p works for me, too. But don’t forget them. There’s time, if you don’t dally, to mix a birdshooter before they need to be turned. Done right they’ll cut with a fork and man, oh man, mmmm.

If the red gods are kind to me I’ll generally have a few birds tucked away in the freezer for this time of year. Long about now when snow is knee deep or better and I’m busting ice from the dog pails with a sledge hammer, I get a few withdrawal symptoms from bird season and find myself pulling out the shotgun and giving it a swing or two on some imagined grouse on a sunny October afternoon. And that is the time to chop some veggies and redskins and have some of those grouse fillets thawed and ready, ‘cause grouse dinner is about the best cure I know for wishing it was still bird season.

Occasionally I’ll fire up the grill out on the deck, but mostly this is indoor cooking in an iron skillet. I’m partial to olive oil and pepper, can’t imagine too many vegetables and can’t think of tastier wild game than ruffed grouse.

I don’t hunt for food, rather, it’s part of a dozen valid reasons for pursuing game with a gun. But when I sit down to a winter grouse dinner, some good bread and wine, I often believe it’s the only reason I need. 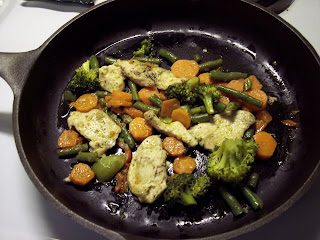