Twenty one. That was an important number when I was a teenager, for reasons that are a bit fuzzy now. It had something to do with the legalities of bellying up to a bar and ordering a beer like a natural born man. At least, that’s what I remember about it.

I’ve been on a long-time quest to catch a 21-inch smallmouth bass on my fly rod. It’s not something I’ve been obsessed with, or have pursued above all else, but I’m not getting any younger and I’d like to cross it off my list. Shouldn’t be all that hard to do – sounds absolutely simple, right?  But it’s eluded me, so far. I have caught some large bass that measured up, mostly while fishing for walleyes using jigs and bait or crankbaits. I caught one last spring on Lake Vermilion that was close, on a Rapala.  And I do also catch a good number of smallies each year fly-fishing, just haven’t gotten the 21.

I have marks on my canoe country maps where I’ve caught memorable fish. There were the lakers on the surface one June evening on Canadian Agnes… Couldn’t keep the walleyes off my fuzzy grubs on Crooked… Camped under the stars one night overlooking a shallow bay on Quetico Lake that I’d spent the final hours of daylight catching one after another 14-16 inch smallies gulping mayflies off the bronze surface… The Alworth Lake northern pike that grabbed my deer-hair popper and swam up to my canoe to give me the evil eye before diving and breaking me off effortlessly… Eating Shell Lake walleyes caught fly-casting a streamer pattern tied with locks of my daughter’s blonde hair. Now, where to try for the big bass?

I ran into an old friend and neighbor just this morning and I mentioned the quest to him. Now, Frank is a rough and tumble guy, part logger, part cowboy; truck driver and hog raiser. He’s an honest to goodness, tried and true Iron Ranger of Finnish descent. In his younger days he took off on his old panhead Harley to live in California for awhile so he could misbehave without his mother knowing about it. He tried to live the hippie lifestyle but kept getting into fights when he was drunk, so he wasn’t well accepted. He couldn’t quite embrace the “peace” part of it all. Anyway, his answer to me was, “Bass, eh? Whatcha do with ‘em, knock ‘em on the head and toss ‘em on the bank? That’s what I do.” Jeez. Around here there’s an old stigma against any gamefish other than walleye or lake trout.

I have another old neighbor six miles east of here that has a 42-pound Great Slave lake trout mounted on the wall of his living room. If you look through his big window when you drive by his house you can see it.  I don’t know him well, nor have I fished with him, but he is reputed to fish with a baseball bat in his boat to beat any northern pike off the hook before it gets in the boat. Those who know him claim he gets physically ill when he gets too close to a pike – can’t stand the smell, they say. This is perfectly reasonable thinking to many of the locals, but it does makes him the easy target of all sorts of practical jokes. It seems weird to me.

The trouble with being surrounded by weirdness is they all look at you as the weird one.

So I’ve been poring over my maps to plan my strategy for the 21-inch smallmouth. There is some criteria I’ve imposed: I must catch this fish in Minnesota. That rules out Chequamegon Bay and Canada, including Quetico. If someone will show me where the big fish live that’s fine, but no paid guides (nothing against guides, I just don’t wanna pay them.) I have to catch this fish using a fly rod with artificial flies. No bait, and of course I’ll try to take it on the surface, but clousers, buggers, and muddlers are OK, too. Northern MN would be nice – who wants to leave God’s Country? – but the Mississippi and St. Croix rivers are fair game (yes, there are a couple of WI rivers that temp me). I’m willing to camp – motels are iffy. Familiar Schtick: these are more guidelines than rules, subject to change at a moments notice. Right now I’m looking at some lakes in the Boundary Waters that I’ve either been to or heard about. I’m favoring a spot that might take two days to paddle to, if I go solo, which is likely but if anyone is interested in joining me I’ll sure consider it. Time-wise it should be late May – early June for the lakes. Rivers are less fussy. 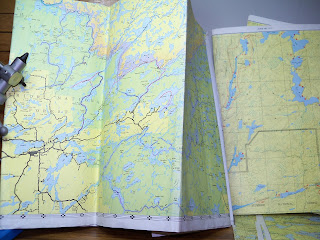 So that’s what I’m thinking about on this cold, cold windy evening. I’ll keep you posted.


Groundhog Day came and went but I can’t recall the resulting prediction. It can’t matter too much ‘cause us northern Minnesota folks put no stock into what a pen-raised Pennsylvania woodchuck has to say, anyway. Don’t get me wrong, I’m not putting down good old PA – I have some very good friends out there, I know there are some awesome bird dogs there and I’d love to fish some of those fabled trout streams. It’s just that I’m thinkin’ that brown fur ball with the unpronounceable name doesn’t have a clue how long my winter is gonna be. I sometimes wonder if the top-hatted mayor who hoists Punxstawney Phil into the air doesn’t maybe secret a pinch of fur into his pocket for later use at the fly vise. Wouldn’t blame him. 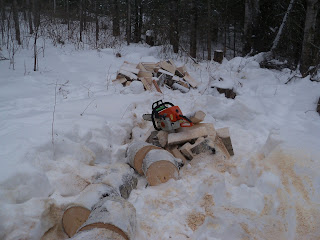 Then Valentine’s Day came. I think it was something like ten below zero that morning. No worries about melting chocolate hearts. That was days ago and winter lingers on. There are people steelhead fishing in Michigan. I’ve been reading about them and I envy them. It will be awhile before there’s open water around these parts so my outdoor gear has not been fly rods, but rather snowshoes and skis. That’s not bad, however, and I like to get out and survey the winter woods on those soft and quiet days.

This is also the time of year that I make a little firewood for next winter, so besides using the skis and snowshoes I also fire up the chainsaw. I was well into it, satisfied that I’d done some real work when I was overcome by the urge for a little recreation. A snowshoe hike seemed in order and a quiet patrol would be a welcome contrast to a buzzing chainsaw. 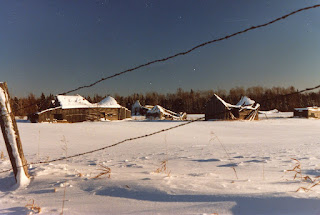 There are a couple of old abandoned homesteads within a half-hour hike from my place. Over the years I’ve watched the weather break them down further and further and the day is coming when there will be nothing left of them. I know only a bit of the history of them, but it’s obvious that turning out a hardscrabble living on rocky northern Minnesota farms was a tough proposition.

The buildings are broken and caved in, but springtime lilacs still bloom around what’s left of the house, and I put in the lilacs around my own yard and kennels from plantings I dug from the homestead over 20 years ago. I’ve trapped and hunted within sight of the old places and the overgrown fields have been important dog training grounds for me. Yesterday I was happy to find grouse roosts in the deep snow of what was once a front yard. I can still find the remnants of a log sauna and smokehouse with Finnish dovetailed corners that I’d bet hung as many deer as cattle and hogs. 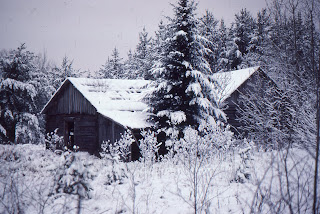 These old homes are kind of mysterious, I suppose, and it’s hard to pass the impulse to explore them. You never know what there is to find; though anything of value had disappeared long before I ever set foot on the place. You hope you don’t stumble into an old well or startle some kind of critter from under fallen roof poles. If you’re in the mindset you may even wonder about any spirits still keeping tabs on their property. I’ve yet to run into any ghosts, but one of my trails goes through the woods right past the old house and I’ll admit it’s a little creepy at night.  Still, they’re compelling locales and I have to wonder what kind of faith and skills and toughness those men and women possessed who made their homes and lives there. Between the two places, on a wooded knoll surrounded by cut hayfields is a small little known private cemetery where some of the original homesteaders rest.

I hiked on home to a warm house and flipped on the basement light to hang my snowshoes to drip on the floor. It was a day to be outside so I grabbed the splitting maul to finish the tree I was working on. The fun part is dropping the trees. Blocking and splitting is… well, exercise. I wouldn’t freeze without firewood, however; my efficient propane furnace prevents that. But there are some trees around the place that need cutting, and every dollar worth of propane saved is a dollar’s worth of gas for a springtime fishing trip.  Or so I tell myself. Yep, it’s a good life.