Year of the fish.

I was standing on the beaver dam casting a bead-head soft hackle into the pond while dragonflies – large black and white allied fighters – occasionally brushed my ear and neck with their wingtips as they buzzed close snapping the mosquitoes swarming my head. High above they hovered like a waiting squadron until prey was sighted and singly each would bank and dive and do their best to eliminate the bloodthirsty mosquito enemy. I was glad they were there, but alas, badly outnumbered – I had to resort to a second line of defense that included long sleeves and bug dope. Now and then a trout would come up and slurp something off the surface out in the middle but it was hard to reach. I was casting well, double hauling for all I was worth and hearing line zing through the guides for what seemed like a mile, but the pond is just too large. Of course, the lowland spruce trees behind me forced a conscious effort to toss a high back cast and it’s hard to achieve your best, be it casting, shooting, or… just about anything when you have to think about it, right? If the fish started rising with any regularity, as I expected, I was ready with dry flies. Just before dark and still only the infrequent surface bite, I tied on a small blue wing olive left over from our Montana trip and hoped for some action. I moved around the edge to where I could see flooded timber under the surface and shot several casts out there. When a beaver swam out hungry for supper I turned to watch and that’s when the strike came. I missed it. The only strike of the evening. A couple of evenings before I’d landed a pretty 10 inch brook trout on the same fly minutes after I got there before a nasty summer storm chased me off the pond. 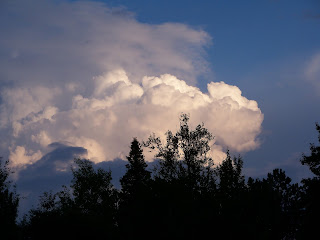 I know a man who survived a lightning strike. The jolt hit a tall pine tree he was hiking past and travelled down and through shallow roots to hit him, his partner, and their guide as they were returning to the truck after a day fishing a western river. All three lived, there was a story about it in one of the big outdoor magazines, but the guide never walked again and though Gary still fishes, he continues to suffer some permanent nerve damage.  With that on my mind I wasn’t ready to stand out in the open under a storm and wave a long graphite rod around… well, maybe if there’d been a lot of fish rising.

It’s been summer hot for the last few days and yesterday my truck thermometer read 91 degrees when I drove into town, but like they say, “it’s not the heat, it’s the humidity.” Well Ok, we had the humidity, too. But we’re having no wildfires or floods or deadly storms. Yet. So I’m not complaining. This morning I woke to cloudy skies with the promise of rain. It was a little cooler and breezy also, but not enough to discourage many mosquitoes from seeking me out while I played with the dogs before breakfast. After eating I sipped coffee and watched our resident Ruby-throated hummingbird try to worry two goldfinches and an Evening Grosbeak from the platform feeder that is mounted a foot from the hummingbird feeder. Then it was time to do something. 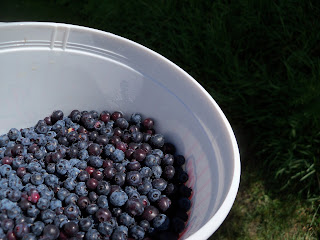 This was the year for berry picking if ever there was one. I even heard something on the radio about this being a banner year. I’m mostly a grazing type of picker, I suppose. I do my blueberry picking when out doing something else, say, running the dogs or riding my mountain bike. With the berries as thick as this year I’d have a handful in seconds and down them for a delicious treat without ceremony. I’m happy for those who pick with a pail and a purpose like P.J., who kept us supplied with dozens of muffins. And then came the raspberries. I can still walk the edge of my yard and gulp raspberries by the fistful. The green plants filled with red fruit give a Christmas sort of look to the yard, though when X-mas surely does arrive those same plants will be buried under feet of snow. For now it’s enjoy it while you can and I’m filling up on wild berries like a sea-bound sailor trying to avoid the scurvy. 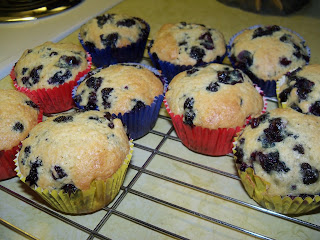 There is a small trout stream not far from here that has a population of native brook trout. I haven’t kept up with the management (if there is any) but I have seen contracted beaver trappers working it in the spring. There were brown trout planted at one time, but I haven’t caught one there in many years. It’s a brushy little river that’s tough to fly fish in, but not impossible. You wade into the middle and work to a run or pool, roll casting ahead. The concentration is hard to sustain and I’ve lost many a fly and leader to the overhanging foliage. The fish are small, too, and many is the time I’ve been frustrated to the point of wondering why I fish it at all. But a rainy day like today seemed the time to try. With only my face and hands exposed and doused with bug dope, I tossed my line ahead in short little casts as light rain dimpled the water. There was no breeze down in the brushy river bottom and the cool water felt good through my waders. I have a favorite dry fly I like to use and the brookies are seldom selective. If they’ll take a bug off the surface it doesn’t seem to matter what it is and because there is almost as much submerged brush in this stream as overhead, a dry isn’t quite as easy to lose. When it started raining hard enough that I couldn’t see the fly, I switched to a nymph and indicator and caught two trout right away. That was it for today. I’m not saying how many times I was snagged above and below water, but I sure miss the more classic trout streams I grew up around.

Every year late in the winter or early spring, about the time when we’re all tired of the snow and bored because there just isn’t much doing in March and we start receiving all those cool fishing rags and catalogs in the mail I typically announce “This is the year of the fish!” When all I have on my mind and when a new angling year’s inspiration comes over me, I can’t think of a thing that will keep me from fishing. Oh sure, I know I have to work some, but I envision leaving work and being on the water minutes later and I can’t think of a reason I won’t camp every weekend with boat or canoe or on the banks of a trout stream.

Well, it turns out I can’t go fishing every day, or go camping every weekend either. Sometimes it’s the weather to blame, sometimes it’s one of the other countless tasks or chores we always forget about when we all we can seem to think about is fishing. Still, that doesn’t mean it can’t be the year of the fish. So far I can’t complain as I’m ahead of most years as far as the trout fishing is concerned. I’ve likely caught more bass, too, and though I haven’t caught as many walleyes, I’ve taken enough for some mighty tasty meals. I’ve even been on a couple of popular lakes with my boat and trolling motor, catching numbers of bass with my fly rod while pontoon boatloads of yakking people and kids on jet-skis cruised behind me, and I really have to be enjoying myself to put up with that! My boat is out of commission right now. Last week I was trying for walleyes in yet another rain storm, and was returning to the dock when I hit the only rock in the lake I could have hit and broke the lower unit of my motor. Bad luck for sure on a familiar piece of water, but I should have it up and running in a few days.

Of course I’m lookin’ to get next door to Wisconsin some more and down to southern Minnesota’s trout streams again. And I’ve recently received a line on some Canadian trout streams that are an easy drive away. Yep, this just might be the year of the fish!
Posted by Al R. at 3:40 PM No comments: