It was just getting light out when I woke this morning but I didn’t jump right out of bed, even though it was Saturday, because I knew the task of snow removal was ahead of me. The large bedroom window faces south and I woke to see a bright horizon that promised a welcome sunny day, something that has been sadly lacking of late.  If I stay in bed very long the sun will climb high enough to shine directly in my eyes and flood the room with light, a bright and bold reminder that OK, it’s really time to get up. But it would take a while for that to happen so I grabbed the book off the nightstand and read a good story about fly-fishing bass in Texas. Not a bad way to start a day.


It was a stark contrast from my fishing tale to the reality of fifteen degrees and the chore of clearing the latest storm’s dumping of snow from the yard and driveway. The fresh snow measured anywhere from 12 inches to nearly double that.  And here it is the 20th of April! I got right to it figuring breakfast and coffee would be more appreciated and relaxing with the work behind me. It was.


I hear we’re setting some kind of record with all this April snow. That may be, but I’ve yet to run into the first person who is happy about such a record. I know some folks who are still taking ATVs and snowmobiles on the lakes to ice-fish for crappies, which would seem to be an outstanding idea but the fishing reports are less successful than you would think. The official opening of walleye season is twenty-one days away and everyone is wondering if there will be open water to fish in.
There’s no telling how the grouse and woodcock are going to fare, but there certainly won’t be any early hatch. I’ve read theories and conjectures that explain the delicate timetable comparing the relationships of when the predator species are born to when the prey species are born – or more to our interest, hatched – and it doesn’t seem like good news. I’m assuming this late spring will have little effect on the breeding cycles of the four-legged furbearers, most of which find young grouse tasty, so I can’t help being concerned about my favored game birds. Still, there are many reasons for late hatches, so let’s remain hopeful. 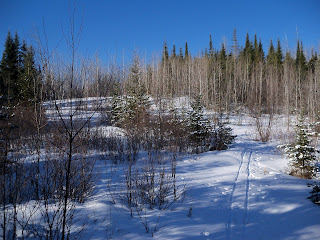 Last Sunday morning the temperature read 5 degrees at six in the morning.  There was about two inches of soft snow over a frozen snowpack of about two feet. It was a sunny morning that would give way to clouds and more snow that evening, but the unusual conditions made for some great skiing and I enjoyed gliding through the woods without the need of a broken trail. The soft snow on top revealed all manner of fresh wildlife tracks and reminded me these woods are alive at night. By noon the day warmed and softened the snow too much for travel so I am glad I took the opportunity when I could. Neat stuff.
There’s also some neat stuff ahead, with a trout fishing trip out west in the works and a canoe country bass trip days after. And if this weather straightens out I can hear some steelhead calling my name.
Posted by Al R. at 12:35 PM No comments:

Despite the foot of heavy wet snow that landed on us Saturday, and 3 more inches last night, and the forecast for six more tomorrow, it is April and spring weather is bound to happen any day. Right?  Any woodcock brave enough to get this far will find over two feet of snow on their singing grounds so I hope they hold off for awhile.

Still, we are all hopeful so I sent off a few early Happy Earth Day messages from my phone today while I was supposed to be working. I couldn’t send out to everyone but I enjoyed the replies. There were a couple of references to hippies, one hallelujah, and even one sort of bah-humbuggy. Well, I’m not usually a humbug sort of guy and there’s not many who would see me and say “look at that hippie!” but I can yell “hoorah!” with the best of them. It’s hard not to like Earth Day because most all of us appreciate the planet we live on. No one has found a better place, yet. It’s easy to take it for granted but as far as I can tell we’d all have a hell of a time if we had to leave tomorrow.

Here on the Range it can be kind of tricky to endorse any kind of support for clean air, pure water, and healthy soil lest we be labeled “environmentalists.” It is, I've heard, the environmentalists who would eliminate our jobs and kick us all out so this part of could become a park for the rich. Or something like that.

Forty-five years ago there were rivers in this country that would and actually did catch on fire. That’s about when the green movement started, though it wasn’t such a catch-phrase until recently. If some kind of movement hadn’t started where would we be now?

I’m not an extremist but I do get along with Mother Nature. She’s a fine and beautiful lady and many of the best parts of my life have taken place close to her. I’ll bet your’s have, too. So I took some time today and smiled at the clear sky and enjoyed a couple of deep, clean breaths of unfiltered air. I’m happy to be able. The official Earth Day is still a couple of weeks away, and I hope you enjoy it. It’s an easy day to celebrate, after all – you don’t have to buy gifts, dress up, or have relatives over. I know not everyone believes in watching out for the environment, but c’mon, it’s about the only thing we really do need. 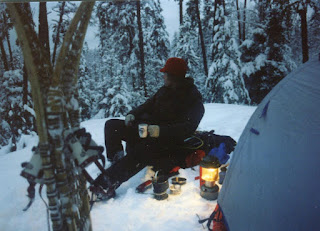