Paul and I called the dogs in and stopped for a break on a hill in one of the prettiest grouse covers you’d hope to see. It was almost a perfect autumn day, the kind you read about in old stories written by the likes of William Foster, Burt Spiller, or Gene Hill. You know the kind, with the sun glowing on crimson maples, gold aspens, and emerald balsams. The kind where a biddable brace of setters cast obligingly ahead, the cheerful bells sounding their whereabouts in the thick cover, falling silent only when one, or the other, or both stop short at the scent of their quarry. How they’d break open their fowling piece to inhale the burnt powder before accepting the tender retrieve and smooth feathers before slipping the dead bird into the game bag. I say “almost perfect” because in those old tales they always seemed to find a fresh-water spring to refresh themselves and canines. We knew our day would warm to the mid-70s so we lugged water jugs in our vests. And those old timers never mentioned picking a dozen deer ticks off themselves and their dogs, like we found every time we stopped to look. Still, that’s the kind of day we were having. 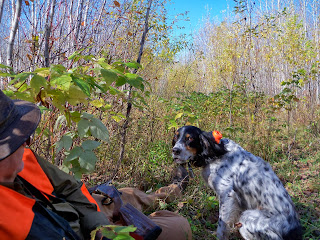 Jack and Scarlett hunted well together and seemed to be finding that quarry around every bend in the trail and at each edge and thicket they came to. We’d elected to run the setters as a brace because we knew the cover was extensive and we’d likely spend the better part of the day in it, which we did. We started in the morning and hours later emerged worn and tired and smiling at a fine day of grouse and woodcock hunting. I myself had used up a pocket full of shells and had one left as we neared the truck when Jack cast right and pointed yet again. I found him solid with a grouse perched on a blowdown three feet off the ground. Bold with over-confidence I stepped to flush and missed cleanly behind as the grouse winged nearly straight away! Paul chuckled at my exclamation of having missed my final shot on what should have been an easy kill. Ok, it was his turn, but we’d each had chances to poke fun at the other’s poor shooting. 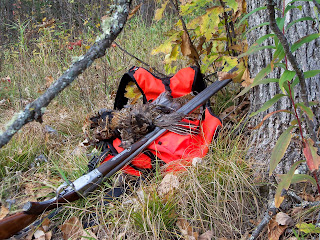 A coupla hapless bum shots blasting holes in the sky? Maybe, but back at the truck we each had conspicuous bulges in our game bags – enough for the promise of some fine eating ahead. Easy shots are rare, of course. It’s just that some are easier than others. Even the woodcock are adopting some grouse tactics and hot-footing it under a balsam to flush low and fast from the other side. Waiting for open shots will only bring frustration so you shoot when you get the chance.  It’s great to see the bird fall, and sometimes surprising, but often enough your dog finds the bird you didn’t know was hit. After a fun day of the best kind of sport it can’t get much better. 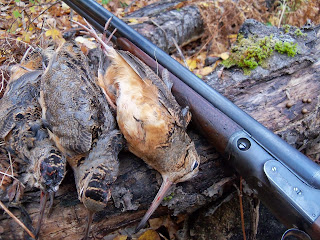 The mornings are frosty, the Hunter’s Moon is bright, and those finest few colorful weeks are upon us. It’s time for hunting, all right, and the next day I hunted some new cover with Jack and Molly. When it works it makes for some interesting sport – hunting a flushing dog with a pointing dog. Somewhere, or somehow along the way Molly the spaniel learned to honor a pointing dog. I used to heel her into to the point and then “hup” her while I did the flushing. She caught on quickly and now she reliably sits when she spots one of the setters on point. It’s neat. And when we’re hunting a trail and Jack is casting ahead, she doesn’t neglect anything along the course and often produces birds we would’ve passed. We dog folks often say we wouldn’t hunt without a dog, and as much as I enjoy carrying and using a good shotgun it couldn’t be the same without a dog. I’d probably stay home and rake leaves or caulk windows or something. Nah! 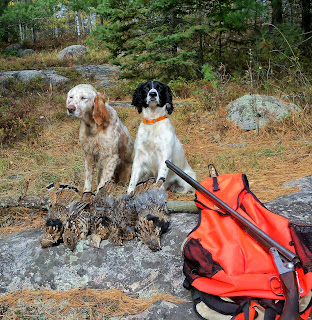 We’re getting our first snow of the year today. It’s wet and cold. We found grouse, yes, taking cover under the balsams where it’s nearing impossible to get a shot. Another gunner could have helped, but who wants to hunt in this weather? It didn’t take long before I was soaked and chilled to the bone. We didn’t hunt long, just enough to get Jack’s brush-beaten tail bloody, again. The dogs seemed happy to get back into the truck and so was I – shivered most of the way home. Hung wet clothes in the basement, lit the woodstove and boiled coffee while I oiled my gun. Yep. 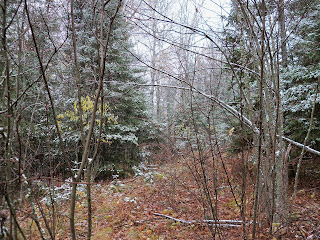 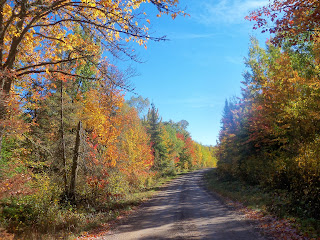 I was sitting on a rock out in the middle of the river doing nothing really, just pondering the surroundings I was in and savoring the clean air I was breathing. I suppose I initially sat down on the smooth round rock to take a little break and maybe tie on a new tippet or something. I really don’t remember, but I know I ended up just taking it in and feeling perhaps just a bit guilty or culpable about it, wondering what I did to deserve such pleasure. Even in the midst of the moving water, now and then I could hear the tiniest “snap” and see a leaf fall into the river. Nice. Later in the day I would explore more of the river and run into a few other anglers, but for the morning I had the water to myself.

Driven by tales of arm-long brown trout and steelhead running up the river from Lake Superior, I took a day during the week and headed for the “president’s river.” Grouse season is open and I had plans for some camping and gunning up north on the weekend, but the prospect of a beautiful fall day on a trout stream was too much to pass up. I did have that non-resident fishing license, after all, and it didn’t seem to be getting nearly enough use.

I fished a section of the river that I’m at least a little familiar with, one that I’ve had success in earlier this year. I plied the deepest holes and runs with small (but not tiny) buggers and nymphs hoping to hook one of those trophy size trout. It seems every fishing story I see is highlighted with a photo of an angler holding a huge, beautiful brown or rainbow and I’d kinda like to be that guy one time. Or maybe a couple of times. Of course I’m never disappointed to catch fish and it’s nice to catch some pretty little trout than none at all… and, as I’ve often said, I’m lucky to get the chance.

I’ve made a few fall fishing trips in the past, usually in canoe country for walleyes but for the most part I’ve spent my autumns carrying a shotgun and following a bird dog around in the woods. Jack and Molly are crazy for the hunt and they’ve provided me some decent shooting the times we’ve been out this fall, enough for a couple of good meals, but I can’t get the fishing out of my head. And I’ve been pursuing it with the fervor of not being able to get enough of a good thing and knowing it’s coming to the end for another year. 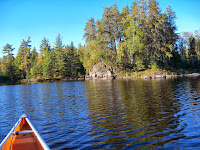 Last week I paddled into a Boundary Waters lake to try for some walleyes as I had a hankering for an old time fish fry. You know the kind: where you dredge nice thick fillets in some type of batter and fry ‘em quick and delicious and gobble them down alongside some spuds and maybe a fresh garden salad so you can have at least something healthy with the meal! I didn’t use the fly rod. This trip I fished deep, with hard baits and jigs and it felt good to be in a canoe in great country once again. The walleyes weren’t biting, however, but the northern pike were active and I landed a bunch. 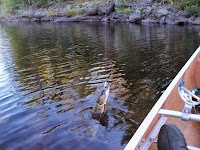 Two days later it was back with Scotty in his Fishcat floating a new river (at least to me) fly-casting large deer hair divers for pike and musky. I’ve caught a couple of muskies before but never on a fly rod and this was the first time I’ve targeted them. I had tied a few flies that I hoped would work and are the largest flies with the most material I’ve ever tied, but they were still on the small side compared to the creations Scott knotted to his wire leader! The muskellunge is the fish of 10,000 casts, so I wasn’t all too sure how this was going to go as far as hooking a fish would be. We did have a short discussion about that, wondering if false casts should be included in the total – because there is plenty of false casting trying to launch a ball of fur and feathers into a stiff wind. And that brings up another similarity I’ve noticed with drift boats and canoes: no matter which way you’re going, it seems you’re always going into the wind.

Well, Scott had checked out another part of this river before and had actually caught a couple of muskies. I don’t know how many casts it took, but presumably somewhere in the neighborhood of twenty thousand, if legend holds. Anyway, while the fishing may have been a little slow, and the wind a little strong, we did beat the predicted storm and had a great day on a gorgeous autumn river. We caught northern pike, and yeah, we caught muskies on the fly! Put a price on that! 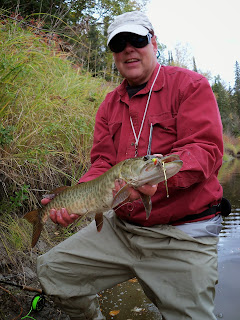