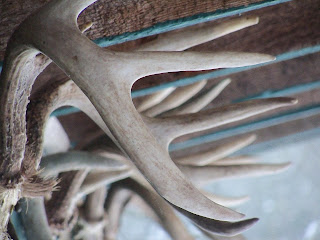 Things in camp were moving along pretty well, maybe a little better for Tony than the rest of us because he’d shot a nice little 3 pointer a week before while the rest of us were still waiting. John had hunted opening weekend and couldn’t return, but Tony came back with Jack, so there were again three of us in camp. I’d had some opportunities – I’d let three small bucks pass the first two days of the season including a six-point that I bleated back twice hoping to see it’s rack was somehow bigger than it really was through my binocular and scope. I know it would have provided some tasty meat, but for the last years I’d been scoring on some nicer-racked bucks that seemed to get bigger each year. I can’t say I’m a trophy hunter, but my photos of past hunts and the antlers hanging on my canoe shed allow me to recall and relive those hunts far after the taste of tenderloins and jerky is forgotten. Anyway, it was early in the season and I reckoned I could wait it out for a bigger deer.

The second Saturday it rained. It really rained. I’d seen one deer that morning that disappeared before I had much of a look, and returned to camp about noon to dry out and warm up. Tony and Jack were already cozy in the wall tent, had the stove stoked and their clothes hung to dry. Tony was the hunter again that morning. He’d killed a good-looking eight point buck before the rain got to him. With my gear hanging to dry it seemed like a good day to sit in the tent and hear Tony’s story while rain pounded the canvas. Jack was already in his sleeping bag.
So we sat around sipping coffee and talking. Tony told how the buck came out of the cutting 70 yards from his stand and he took him broadside, and maybe he’d have a head mount done by a taxidermist friend. I was considering how I was going to fill my smoker with venison that I hadn’t killed yet. Outside the rain had turned to a kind of slushy sleety mix and it was mighty comfortable in the warm tent. We were in the middle of discussing the merits of an enclosed heated deer stand when there was a knock on the canvas door – or what passes for a knock on canvas. Tony unzipped the tent and invited in our visitor, a thin old timer who stepped in and said, “Boys, I’ve got one down and could use a little help.” He was wearing an old red wool coat with some blaze orange sewed to the shoulders, a red wool hat, wool pants, and a pair of those knee-high rubber boots that I’ve always known as “mean greenies”. 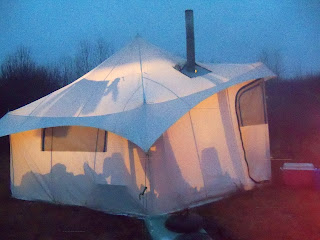 If you’re one who spends much time in wild country, you know the time may come when you might need some help in one way or another. So when someone can use a hand there is only one answer. While Tony and I were getting ready to go, the old fellow introduced himself as Dennis and spotted my rifle propped against my cot. “Model 700?” he asked. When I affirmed it was he allowed, “Yeah, that’s a good rifle, shoot one myself.” And just before we all stepped out of the tent Dennis looked at me and asked, “You don’t happen to have a camera, do you? It’s not a bad buck.” No problem, I assured him and slung my camera around my neck.


We followed Dennis several miles up a forest road to his hunting spot. Then we kept up as he marched in at a pace that far belied his 73 years. After a short walk he stopped at a mark he’d kicked in the dirt and turned to describe the circumstance. He’d hunted his way down to a little lake and was working his way back. “Oh, I was soaked, soaked to the skin!” Two bucks, he said, had chased a doe across a trail before him and stopped, “eighteen steps away, right by that tree,” and he paced it off for us. “I shot the bigger of the two,” he explained with a satisfied grin, “and it ran back in there and dropped.” Dennis had his deer dressed and covered with balsam boughs to keep it hidden from the birds, and anything bigger that might have taken an interest before he got back to it. He tossed the boughs aside and revealed a huge, beauty of a mature ten-point buck. Tony and I both said Wow and admired the buck, each of us instantly wishing we’d had a chance at a deer like that. I got Dennis to pose with his deer for some photos and he seemed amazed when he told me his son had a phone that could send pictures “anywhere in the country!”

Before long we had the buck pulled up to the road and loaded in our truck to haul up to Dennis’ camp. Hanging from the front of his camper was a collection of deer and moose sheds that serious shed hunters might take years to find. He’d picked them up during one week of deer hunting. And he had a dozen wire muskrat stretchers along. He was camped for the entire season, might as well do a little fur trapping, too. Once safely hung in a tree, we admired that deer until Dennis invited us to rest in his warm camper. Over his wife’s homemade pie (“Oh, you’ll enjoy this!”) we listened to Dennis tell his stories of hunting that country for almost fifty years. He spoke with a hint of an accent (Midwest Scandinavian, I’d say) that’s easy to listen to – with a simple truthfulness that comes from over seventy years of honest country living.

After making sure we were comfortable and had plenty of whipped cream on our pumpkin pie, Dennis produced a photo of the largest buck he’d taken. In it he was posed next to a massive 300+ pound heavy antlered twelve pointer he’d killed many years ago. In trying to pick his brain it soon became evident that this man was a hunter. A real hunter. He’d camp off the forest road for the entire deer season. His companions couldn’t hunt the season like he could and he would be on his own until the last weekend when his son would return to break camp. Each day he would be out in the woods exploring. He’d find deer and moose sign, see fishers and pine marten and spot a wolf now and then. He knew who was camped where and their various hunting grounds. I saw his compass but I doubt he used a GPS. “When you’re out in the bush and your shadow is fourteen feet long, you’d better take long steps to get out before nightfall,” and “The thing about deer hunting is you never know what will happen in the next half-hour.” Quaint and obvious advise, I suppose, though I had to feel a little embarrassed about contemplating the enclosed deer-stand when he related how he’d taken all but one of his many deer and thirteen elk “with my feet on the ground.”

Differences in hunting technique can be too subtle to be noticed. Or they can be so diverse and contrasting that one wonders how it can all be covered under the one heading “deer hunting.” For years I tried to perfect the still-hunting method – sneaking slowly and quietly, stopping often trying to see the deer before it saw me. It can be an excruciating and frustrating exercise in patience, but it is also a fulfilling way to get in touch with the land and nature and that is important for, well …good reasons. And when it goes well it is the most rewarding, at least to me, way of deer hunting possible. The best buck I’ve ever taken was by this method, but for the last four or five years most of my deer hunting has taken place sitting in a tree waiting for the deer to come to me. The “hunting” part was mostly pre-season hunting through my basement in search of my gear. I’m not sure if still-hunting is an art or craft. I’m kinda hoping it is something that can be learned, then perhaps I can get better at it, but I get the feeling that some folks, such as Dennis, have some kind of aura or karma about them that grants consistent success in their pursuit. You know how it is, some people catch all the fish doing nothing noticeably different than anyone else in the boat – and they do it effortlessly.

It was too late to hunt that evening after our visit, but it was worth every minute. Dennis doesn’t know or care much about cell phones and computers, but he can tell you when the deer will move by how the clouds cross the sky. I don’t know how many guys know how to hunt, know the country, and know woodcraft like old Dennis, but there can’t be many. I’ve been hunting the same country as Dennis for quite a few years now, but when he described some hills and valleys, swamps and ledges and rivers that he thought I would know I had to admit I hadn’t been there. And I wonder why. I didn’t sit on my stand the rest of the season. I was again inspired to hunt the traditional way. I wanted, once again, to hunt a nice buck like a woodsman, with my feet on the ground. Later that week I was able to drop off copies of the photos I took, but of course he wasn’t at his camper – it was daylight, after all – old Dennis was somewhere in the woods. 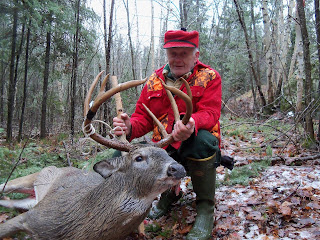