Last year on Valentine’s Day the temperature was around 15 below zero. It’s a little warmer than that today, but it was that cold yesterday morning when I sat inside sipping coffee and watching the usual hoard of pine grosbeaks, redpolls, and chickadees flit from the front yard birch tree to the feeder. Every now and then a trio of bully bluejays would drop in and boss everyone around until the red squirrel would make its long jump from the birch to the feeder. Then I’d wave my arm so the squirrel would spot me through the window and make its exit.

I’d planted that birch tree years ago after PJ and I spotted it growing by itself alongside the road a half-mile east of here. I’d had a number of failed attempts at transplanting birch trees in the yard but this one made it, probably happy in a location safe from the hazards of snowmobiles, ATVs, and snowplows. It’s was barely two feet tall and the little trunk was kind of twisted and forked at the base, not the kind of tree you’d pay money for at a nursery – more of a Charlie Brown looking sort of a tree.  Anyway, it was worth a try.

Our birch tree has grown into a beauty, and when it grew tall enough PJ hung a little bird house on a limb. I thought it was mostly decorative, but I’ve seen chickadees and wrens go in and out of the tiny entrance. And sitting here this morning watching the snow fall and birds hopping from limb to limb is downright pleasant. I wouldn’t try to recall the hours I’ve enjoyed just watching that tree and sometimes I feel a tinge of guilt for just sitting around, but what the heck.

I once worked with a fellow who declared birch trees “dirty.” Of course he was a persnickety town person with a postage-stamp sized manicured lawn that would have looked even better without the idiotic “KEEP OFF THE GRASS” sign. He hated the thought that his mailman might be cutting across his lawn while he was at work, and October leaves gave him fits. He also didn’t hunt or fish, so… there you go.

It’s true that my birch tree has a habit of dropping thin little branches on the ground, and sometimes I’ll pick them up but mostly I just run ‘em over with the mower. And I’ve had to lop off a branch now and then to keep them out of my face when I’m mowing, but the tree has done fine despite my unscientific prunings. There’s a lot to like about birch trees. I can’t think of better fire tinder than birch bark. This country was explored in birch bark canoes. Around here they’re one of the best firewood available and birch paneling is beautiful. The white trunks standout against green summer foliage, and the catkins provide some grouse food when times are tough. What’s Christmas without a birch yule log?

There are a few other birch trees in the woods surrounding our yard and I wish there were more. I’d like to fill the woodshed with it. Many of the big stands of birch have been cut for firewood and I know some loggers are selling jack pine and aspen to burn, something no one would consider buying a few years ago. But the front yard birch is safe from that fate and will keep the birds and me happy for years to come. Knock on wood. 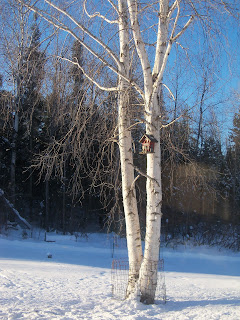