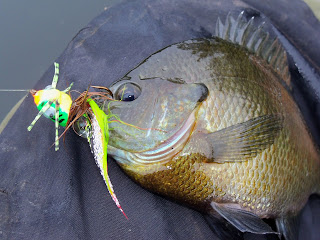 Man, bird season opens in ten days and I haven’t finished my June fishing yet! I just spun new line on a reel today when I suppose I should be oiling the boots and getting some shot shells lined up. I still think I need to wave a fly rod at some more sunnies and bass before summer is gone. The days are still summer warm but the evenings have been getting right chilly. My neighbors over in Embarrass took a frost last Sunday evening. A few weeks ago I was working dogs with a buddy and we talked big ideas of shooting clay pigeons and scouting out new places to hunt before season. Well, we haven’t started that, either.
A while back I opened an insistent e-mail that simply stated, “There’s no excuse not to go fishing ” It was from my buddy Scott who spends his summer days-off fly-fishing a couple of neat rivers for, mainly, smallmouth bass. We’d never gotten our spring trout camp put together and after a number of false starts he laid it on the line, so to speak, and quite perfectly to boot! I had days available, and the desire to continue my quest for the large bass taken with a fly of my own making. So after the many e-mailed photos of Scott and company posing with recently hooked bass of hefty proportions, the plan was made.

I’d never fished the river we met on, but it’s a real beauty. Hardly any development along its banks, too shallow and rocky for any heavy boat traffic, and a good population of smallmouth bass. The order of the day was drifting downstream to a take-out point, tossing large poppers and divers to the shoreline and jerking them back with quick, violent strips of the line. 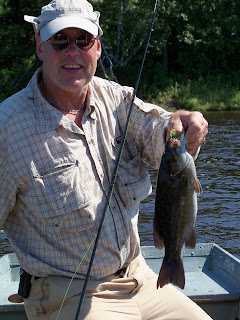 Most of my angling consists of wading or sitting in a canoe or boat, so standing on the raised deck of Scotts jon-boat sometimes tested my balance and though I caught myself a few times, I managed to stay in the boat throughout. A western style drift boat would be a nice way to go, but the jon-boat works well and I brought home some ideas on how I would modify one for that type of drift fishing. Scott floats the river often and made a fine guide, optimistic and complimenting my accidental accuracy when appropriate. We took turns at the oars and I learned something watching him fish the river, too. 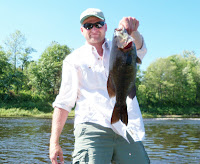 There’s some kind of excitement seeing your popper explode in a splash as a river-raised smallmouth hits and takes off. The fish living in this current are strong and the thumping rod relays their effort to shake the hook loose. They often clear the water at first, dancing on their tails before bulldogging their way to the rocky bottom and doing their best at staying there. Neither of us caught the 20 incher that day, though it’s no surprise that Scott took the biggest. Fighting a stiff wind part of the time and constant casting or rowing had me getting sloppier and sloppier, and after something like 9 hours on the river I was kinda tired out. But a good kind of tired and one I’m looking forward to again. 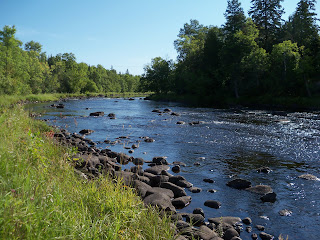 It’s hard to stop having that kind of fun, so days later I waded the rocky Cloquet River without as much success at catching fish, and the fish I caught were indeed smaller, but with apologies to J. Gierach, I was, at least, standing in a river waving a stick.