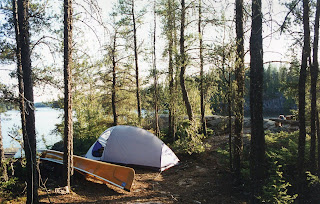 When I was a kid in Boy Scout camp I failed over and over to earn a merit badge in woodcraft ‘cause I kept forgetting to make sure nobody was in range while I was chopping wood. I guess I figured if anyone was dumb enough to get close to a kid with an axe, they’d get what they deserved. But the night games of capture-the-flag and afternoons canoeing on the Mississippi river made it all worth it, even though I couldn't get anyone interested in paddling across and invading Wisconsin by water. Maybe that’s when I realized much of my outdoors life would be spent alone. 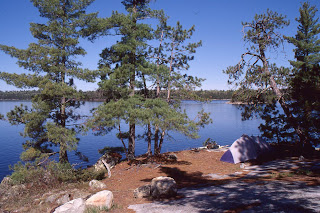 My camping has come quite a ways since those days, but it usually still amounts to crawling in a tent and sleeping real close to Mother Earth. There are exceptions, of course, like hunting camps in comfortable cabins or sleeping in some kind of RV during a fun recreational weekend. All in all, however, my camps still have a primitive flavor to them.

Living close to Minnesota’s Boundary Waters Canoe Area Wilderness has afforded me some wonderful camping opportunities and some great country to travel and fish in. I’ve made some unforgettable canoe trips through the BWCA and the Canadian counterpart, Quetico Provincial Park. Early on I was impressed with the idea of going it alone and soon found my way to owning several solo canoes before I settled on the one that I still have today. My first trips were learning experiences. I used gear I’d collected when I was tripping with a group and quickly learned that weight is the enemy for a solo traveler  and I took to updating just about everything I owned from tents to sleeping bags, to stoves and packs. When all was said and done I was comfortable and confident with my stuff and was spending weeks each year in canoe country, by myself.


I recall easy quiet mornings where the only sounds were from songbirds and my deer hair popper’s “bloop!” on the still surface of a border lake shoreline. Always expecting the ferocious strike, it seems so unexpected when it does happen. Like buck fever in the deer woods, my heart races as the fly rod bends to the weight of a diving fish. Then there was the evening on the north end of a broad Quetico lake when schools of minnows boiled the surface and jumped from the water hoping to escape the pursuing lake trout that coursed back and forth just beneath my canoe. I wonder if I’ll ever see anything like that again, or experience that kind of fishing? And could anyone ever tire of the loon’s piercing call that startles you awake during the night, then to lie back on the sleeping pad and enjoy the song through thin tent walls?

I’ve caught scores of walleyes in those lakes, and pike so large I wouldn’t try to get into my canoe. I’ve been pulled far across clear lakes by large lake trout not willing to give up and I’ve enjoyed backwoods fish fries that still make my mouth water. I’ve camped in the best of weather and some of the worst. I’ve lain on rocks and became sunburned at water’s edge, and I’ve huddled under a tarp while storms pummeled my camp to a muddy mess. 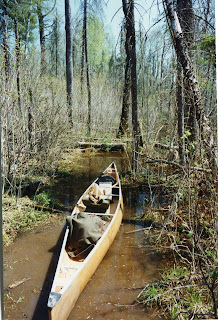 I’ve also made trips that were mainly focused of traveling and exploring, and some of the sights and experiences are indescribable. I remember one camp where I sat on the shoreline and watched a moose feeding across the lake the same time a bear was prowling a couple of hundred yards from it, all the while a pine marten was exploring my campsite behind me. I once ignored a Quetico ranger’s route warning and failed four times to paddle upstream into a dangerous chute that was bound to capsize me in high cold water. Unwilling to backtrack, I ended up spending hours cutting my own portage. There was another early season trip where I found portages flooded and pushed my loaded canoe through the trees to a lake waiting ahead. From the lake looking back it was impossible to find the portage trail and I was happy to make camp knowing I was not returning that way. 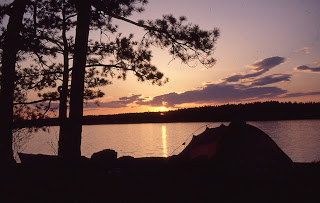 A few days ago I woke to hear rain pelting my tent. It was the same rain I fell asleep to, but it’s a different matter to be lulled into dreamland by the rain than to know I’d have to get up and break camp in it. So I relaxed in my bag and listened, and dozed, while the rain and wind drummed and rustled the nylon tent surrounding me. For those who have experienced it, you know there’s nothing quite like it and I hope to enjoy again, soon.
Posted by Al R. at 11:06 PM 1 comment: