There’s still a bit of snow at the edges of the yard. The last two weekends we were the recipients of two snowstorms. The first left 10 inches on the ground, the second only a couple of inches. I have to believe it is the last, but there’s been a robin flying from the front yard birch tree to our living room window and seemingly tries to get in. When she’s unsuccessful she flies around to the back of the house and tries one of those windows. I wonder if she knows something we don’t? That’s not the only strange animal behavior lately, either. Yesterday P.J. reported a young deer circling around the kennels and teasing the dogs! The deer would approach the chain link and then jump back and trot around amused at the game. The dogs barked at first, but were soon whining and wagging at their new playmate. Of course I don’t know that this was the only time it’s happened. Maybe they do this regularly! At dawn the owls are hooting and the grouse are drumming all day, so that seems right, at least. 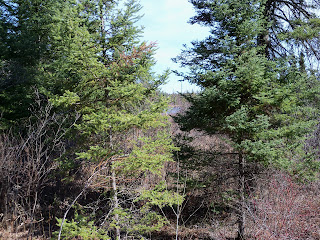 Stream trout season has been open for over a week. The weekend before opening day I made the trek to a beaver dam a few miles north of here that holds some brook trout. The water was clear and inviting, a lone Canada goose cruised the pond, and I was eager to get back with a rod. I’m not the only one who knows about it, unfortunately, but while I’ve seen sign of others who fish there (mainly discarded worm boxes), I’ve never actually been there when someone else was there, too. It’s not particularly easy to get to – I’ve walked there, mountain biked, and ATV’d to it. I usually take my favored 5 wt. trout rod, and sometimes some ultra-light spinning gear. When I get to about fifty yards from the pond I can just make it out through the balsams and spruce. It pays to sneak the final path in because you just might startle some ducks or geese, otter or mink, or even a moose.

The creek it’s on meanders through mostly swamp so when you’re fishing the pond that’s all you’re gonna fish. You don’t go upstream or down. You just kinda wobble your way out onto the dam, trying not to step in a hole or stumble, find a comfortable place that looks good and start fishing. There’s room to fly cast and that’s a plus, but sometimes I like to just sit and be as inconspicuous as possible. Beneath the water the bottom is a gray clay/silty material that you either slide on or get stuck in. No one wades in there. There’s also plenty of flooded timber to hide a fish and grab a lure. When it’s still I’ve had luck with dry flies, but I’ve done the best on breezy days drifting a nymph under an indicator. Not the classic way of nymph fishing, but I didn’t know that the first time I did it. Streamers or wet flies should work, and I’m waiting for the day they do. 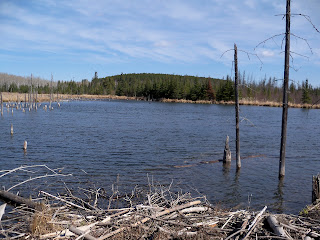 Now, this beaver pond isn’t full of fish. It isn’t the kind of place I’d drive a long way to get to, but it’s trout water and close to home. Some good fishermen with bait could possible fish it out in a day. I haven’t kept a trout from there in years. The last time I fished there I drifted one of my beadhead gold marten nymphs on a breezy, drizzly summer evening. The indicator jerked once and I soon brought a little beauty of a brook trout to net. I looked at it for a moment and dipped it back into the water where it disappeared so fast I almost had to wonder if I caught it at all. When the breeze died the mosquitoes swarmed in like a nightmare and I made my escape with the aid of a flashlight. It was the only fish I caught that day. By the time I got home I may have remembered it as a few inches longer than it really was. Maybe that’s what it takes to make it worth going back.

I’d hoped to get into the pond on opening day but a broken truck had me dealing with tow-truck drivers and repair shops. On my way home from town in a loaner car I met a fellow I know as a trout fisherman coming from the direction of the pond. He waved and smiled as we passed, but I can’t say if it was the smile of a successful fishing trip or just being friendly. I don’t even know if he was at the pond. I do know he’s the kind of guy to leave no trace of his whereabouts, so if he fishes the same water before you, you won’t know he was there and think you’re the first. That’s not a bad thing, and one of the things I like about him.

The snow and rain has since brought the water levels to near flooding, but a few dry days should make them fishable again. And I’m eager to limber up a rod.
Posted by Al R. at 8:42 PM No comments: