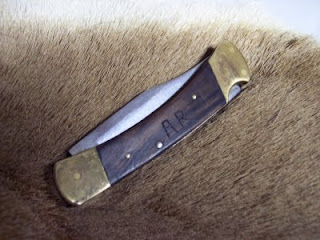 All outdoor folks have some cool stuff that holds some kind of meaning to them. These things are likely not all that valuable, at least in terms of dollars and cents, but might offer a worth that money can’t measure up to. Over the years people are bound to hang on to some tangible bit of wood, metal, material or whatever that they’ve used or collected for some obscure reasons known only to themselves. I know a man who doesn’t hunt anymore but keeps an old Faulk’s duck call on his end table. The call is split up the side and doesn’t work anymore and he’s lucky to have a wife who understands. At first glance most folks would wonder why it hadn’t found the trashcan long ago. The old guy hardly ever notices it himself, but when he does it means something.

I have an old military issue mirror that was my Grandfather’s. He gave it to my Dad and he passed it on to me. I’ve used it camping in the BWCA and elsewhere when I or someone with me thought a mirror would be useful. It’s made from a rectangle of very high quality stainless steel and is of a size that just covers my hand. There is a hole punched in one end for hanging and is kept in its own canvas case. I wonder if such quality steel is available anymore – this piece of steel reflects true distortion-free images from either side. I can picture Gramps using it to shave from tent or trench, maintaining military discipline, before grabbing his Springfield for battle in Europe.

Years ago there was a fellow named Charlie S. who handmade a few dog bells for his setters to wear on their collars when he hunted grouse with them. I’ve seen a lot of bells in my time but his were unique in sound and style. I know of two men Charlie gave one of his bells to. I am one of them. My setter, Molly, was wearing it when she won the Minnesota Grouse Dog Championship. I’ve had some good dogs since, but none that have lived up to wearing her bell.

The Buck Folding Hunter is probably the best known Buck Knife ever made. When they first came out I wanted one badly, but could never seem to find the money to purchase one. When my sister presented me one for Christmas I didn’t know what to say. Susan was just a teen with a part-time job and to buy me such a gift was a real sacrifice for her. I was thankful, sure, but she deserved far more than she ever got from me. I cut my initials into it and carried that knife on my belt daily for years before finally reserving it for hunting only. Every deer I’ve ever killed or helped others with has been dressed, skinned, and cut with that old Buck Knife. I’ll never use another for deer hunting. Shortly after she gave me that knife, my sister died in a vehicle accident. Every year I handle that knife; open and close it; pull it over the whetstone; pass it from hand to hand, I wonder what kind of woman Susan would have become. And I treasure that knife.
Posted by Al R. at 8:50 PM No comments:

I was in the fleet store this evening looking at deer hunting gear and gadgets when I ran into an old friend doing the same. He told me he’d just went back to work after taking the most of October off for hunting and fishing. He couldn’t believe how quickly that time passed. I know the feeling.

I spent most of October hunting, also, and though it was a tough month weather-wise, I hated to see it end. I can’t remember such a wet bird hunting season. I know it’s not over yet, and there may be good grouse hunting in Nov, and December, but it’s a chancy bet with the snow that will likely be here. As a matter of fact I often find grouse bunched up near clear cuts late in the season and the shooting can be awesome. But it’s not the kind of day-in, day-out hunting I enjoy when the leaves are turning.

I hunted a lot in raingear this year. It wasn’t easy to find a dry log to sit on and enjoy a sandwich while my setter lay in dry leaves next to me hoping for a bite. My evening routine consisted of hanging clothes to dry, sticking boots on the boot dryer, break down the shotgun for an oily rag, supper, drink, bed.


My hunting was interrupted only by the field trials I had been asked to judge. During them I connected with long time friends, saw some great dogs work many grouse and woodcock, and had a fine time in general. Hunting or trialing, I walked hours a day, and I ate bigger meals than usual but lost nearly ten pounds in October. It was nice to do a little duck hunting when I could watch the morning break sitting in a boat or canoe. I might be in better shape than I was the first of the month, I know my dogs are, but after weeks of following bird dogs through tight and heavy cover, I feel kind of worn out. But not wore enough not to do more if the opportunity presents itself.

On our last hunt in October I was treated to maybe the prettiest grouse find I’ve ever seen. My setter Ty hunted forward on the edge of a cutting, when his bell fell silent. I climbed out of a draw to come into a little meadow where I saw Ty pointing on the other side just at woods edge. He was facing right and stood tall and still, poker straight tail at twelve o’clock. I approached in the wide open of the meadow when three grouse exploded simultaneously in front of the dog. Two went for the woods and the third came across the meadow. You seldom get offered shots like that and I’ll remember that scene for a long time.

Saturday morning I’ll watch night turn to day in a quiet deerstand. A few days of that peaceful pursuit will be welcome. But it won’t take long before I’ll miss the action and sound of dog bells, fast flushing birds, and smooth swinging shotguns. The best of bird season is coming to an end. It felt like summer when it started, and it’ll be winter when it’s finally over. It will be too soon for me.