When it comes to packing for a trip, be it hunting or fishing, I’ve always been kind of lazy about it. I suppose it has to do with having most of my gear pretty handy and all I really need to do it toss it in a pack and get going. I’ve had most of my stuff for years and I’m pretty comfortable with it and know its capabilities. But the trip I’m about to take had me sort of backed up on my heels. Two companions and I are about to float/fish/camp a river in some wild country. We’ll get dropped off by floatplane and picked up by floatplane after some seven days and 60 or so miles on the river. Of course we’ll all figuring on an awesome adventure, but we know the weather could be less than ideal. There’ll be no re-supply or quick exits, so our gear and supplies need to be in order.

I got to thinking about my stuff and realized that even though it’s of good quality, it is getting pretty old. I’m not against updating and replacing what needs to be replaced, but I don’t exactly want to buy an entire new outfit for this one trip, either.
That’s the trouble with all this stuff. Outdoor gear has come a long way in terms of technology. It’s light, waterproof, and comfortable. But I’m an old school guy who remembers wearing my grandpa’s Maine Hunting Shoes when I was a teen and grew to believe that equipment should not only work, it should last. I’ve went through many a pair of boots and jackets that were guaranteed waterproof, and were waterproof for a while. Turns out they’re waterproof until, well, they’re not. I suppose that’s why quick drying supplex type clothing is so popular, which really does work but wears out quickly, too – probably ‘cause it’s so thin. The shoulders of my very favorite “guide wear” fishing shirt disintegrated under the weight of my trout vest. I guess that may be a good thing: fishing enough to wear out a shirt, but I really expected to get more use from it.
I recently read an online review (for what it’s worth) of a big brand fishing shirt. One guy loved ‘em, gave them five stars. Said he buys six of them a year. Huh? That’s the price of having good, comfortable gear. When it works it’s great, when it gives up we buy more.
So I’ve gone through pretty much all of my gear: my tent, sleeping bag, waders, boots, etc. I’ve sorted out what I think is good, replaced some of the questionable stuff, and even repaired some of it.
The one thing that really had me busy was tying flies. We’ll be fishing for salmon and trout and using flies proven to the area. I’d never tied pink wogs before, or pink anything for that matter, but I am now. There’s a saying where we’re going, “if pink doesn’t work, try pink.” Of course that’s not enough. Gotta have some chartreuse, too. And purple. Some black. And white. And some brown. Mostly streamers of varying types. Barbell eyes. Coneheads. Egg-sucking. Sparkly, furry, feathery. Oh, don’t forget some mouse patterns! When those big rainbows hit a mouse it’s amazing, so they say. I gotta believe it.
It’s always fun to fish and explore new country, and this will be an exciting trip. I’ve been on a couple of fly-in fishing trips before, but I’ve never caught a salmon on a fly rod, and I’ve never fished were bear spray is standard equipment. I’m hoping I take the time to fill my camera with photos. I know it’s a little selfish, but I hope to come back with at least a few photos posed with big fish! 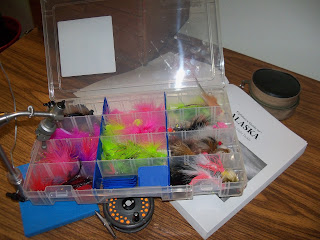