I’m not entirely sure what ALL the signs of growing old are, but if I ever wake up wondering, my shoulders and left knee will remind me in a hurry. Wasn’t it just yesterday – ok, the day before – when I’d fly down the winter ski hills hootin’ and hollerin’? No, not so much anymore. The last time I stuck the tips of my skis over the edge of a black diamond slope I was thinking if there weren’t so many people about I’d turn around. But down the hill I went carving hard turns so I wouldn’t build too much speed and made it to my laughing daughter waiting at the bottom.  There’s a reason the bar in the chalet is always crowded.

I don’t think white whiskers qualifies as blondes having more fun, and somewhere along the way my pants quit staying up and suspenders assumed a more important task than just trying to achieve the lumberjack look. I suppose there’s a physiological reason for that having to do with too much of one thing and too little of another, but then I’m no scientist.  I still get after it for the most part and there’s that old saw “I’m not in bad shape for the shape I’m in.”

I’m still getting more than my share of catalogs. I remember looking forward to them when they were all about fishing and nothing else. Rods, reels, and Rapalas. Now days they figure the fishing gear is only a prelude to the mountain of other stuff that is necessary. I mean, who could go fishing without a new 4-wheeler or side-by-side? Do you really want to be seen this spring with the same vehicle you were driving last year? Of course you don’t want your machines looking like everyone else’s so just take a look at the accessories available. Don’t forget the generator, you probably won’t use it but there’s nothing like the sound of one running all night to make you forget you’re away from civilization. And there are cell phone holders and video camera mounts for your boat, ATV, RV, tent, canoe, boat, bike, motorcycle, mower and snowblower. Yep, you can even buy a drone. All from the fishing catalog.
I think the fly fishing catalogs are better, though there are still things offered that would be a stretch to categorize as fly fishing gear. I haven’t received an Orvis catalog for a long time, I guess I wonder if they even put them out in this day of online everything. I used to spend hours gazing at the pages and I always liked how they used to name the models of their rods – there was the 4 wt. Brook Trout, the 5 wt. Far & Fine, the 7 wt. All Rounder, and so on. The monikers became modernized, a business decision I suppose, but Trident and Matrix seem a little too nascar sounding to me, though a good rod is a good rod no matter what they call it. Some of the new rod models have real space-age sounding names and those with alphabetical letter designations seem more suited to crotch-rocket motorcycles. But I could be jumping the gun I suppose, and it appears the rod makers are dialing back to a gentler time and I’m seeing models named after creeks and rivers and such. That’s better.

The trend toward fly fishing big fresh-water predator fish is hard to ignore and it’s become the hot thing to throw chicken-sized flies with heavy rods that were once only considered for the ocean. I love doing it myself, though I’ve never really gotten into the “rip their lips” machismo mode of it, and I’ve been lucky to have enjoyed some real good times doing it. Of course, they’re all good times and it’s about time to have some more. 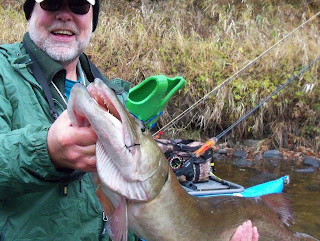