I guess you could call it an Indian Summer, though it came on so quickly I think everyone just went outside and basked in the sun without thinking to call it anything but welcome. When it snows in mid-October, even here in northern Minnesota, it catches us all unaware. Sure, it was predicted but the temperatures had been hanging in at 35-40 degrees and we all figured a bit of snow would melt quickly. But temps dropped with the snow and here we were dealing with 20 degrees and six inches of snow. In a few days the smaller lakes were ice covered and it looked like winter had arrived. 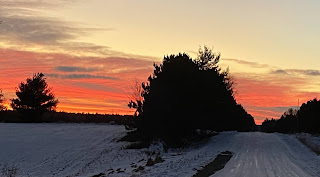 Low and behold, a couple of days before the month ended we were treated to a warm spell. The sun broke out and heated things up to 60 or a little better. The snow melted, the roads (at least the country roads around my place) turned to mud and suddenly every vehicle around wore the same brown coat. No one was about to wash their car until things dried up.

I'd pretty much stowed my fishing stuff for the year and Gabby and I were happily content hunting grouse, but sunny calm 60 degree days in November offered a rare open water angling opportunity. I only had to decide where. 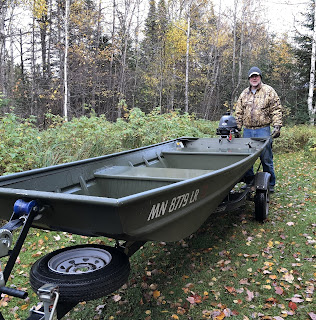 Everyone knows that muskies feed heavily in the fall to supposedly fatten up for winter. Or so they say, though it could strain the definition of common knowledge. I've fished for, and caught, muskie late in the season but I'm still waiting to hit the feeding frenzy. I recently heard of a guy who hooked 13 muskies in one day fly fishing, and landed nine of them. He wasn't in this part of the country but still, I have a hard time wrapping my head around that. I mean, just when you get to feeling pretty savvy about your musky skills you hear something like that.

I figured to slide my jon boat down the bank into my favorite musky river, motor upstream for an hour or so and float/fish my way back. That would eat up most of the short autumn day and I'd still be off the water before dark. No telling how many muskies I'd hook. 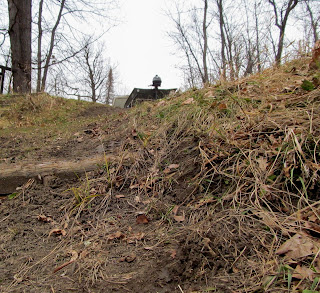 The river was running a little high and dirty, which I knew it would  thanks to the melting snow, meaning I could run my motor without too much worry of hitting obstacles or bottom. Of course lower water concentrates the fish and may mean easier fishing so there's always that trade-off. I've paddled my canoe upstream during low water periods and enjoyed wading to mid-river and casting to deep runs at outside bends but I've never been as far up as I expected to with the jon boat. Part of this trip was exploratory. 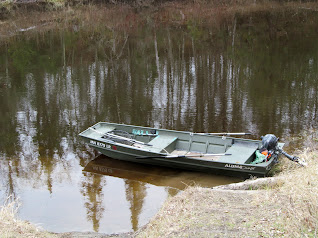 My little 2.5 horsepower motor puttered me against the current at the comfortable rate. I slowed her down when I knew I was over shallows and twisted the throttle when it seemed safe. I did hit a rock in mid-river once – my homemade lower unit guard provided some comfort but the unprotected prop took the brunt. It wasn't the first time that motor tangled with rocks and though no real damage occurred, the leading edges of that three bladed prop are looking like chair legs the puppy has chewed.

The river itself is a beauty no matter the time of year. There's a hunting shack near the road and put-in, but from there upstream it's wild and undeveloped. You'll have no cell phone service and it doesn't take long to realize if you have trouble it could be real trouble, but I figured if I didn't fall out of the boat I should be OK. The bare shoreline hardwoods allowed a good view into the woods and I kept looking for wildlife, which seemed missing that day.

I stopped motoring at an inlet stream that looked too good to pass. My small folding anchor held while I stood and fan cast the area with a bright 6/0 streamer on a 10wt intermediate line, to no avail. On the way up I'd seen a boil of a big fish near the bank and it's wake out in midstream but didn't stop to try for it, thinking I'd get it on the way back. So after I poured some coffee and ate a sandwich I pulled anchor for the float down.

Float fishing from a boat by yourself is not the easiest thing to do, but the river was good to me and I could drift and cast a decent way without grabbing an oar for correction – there was no wind, which helped – although here and there it seemed prudent to anchor and cast to a run or some kind of cover be it a fallen tree or rocky shoreline. If anything, I drifted too fast – my handheld GPS read the current 1 ½ mph – giving me one shot, and one shot only, at some of the spots I wanted to cast to. In much of the river you can float down the middle and reach both banks with a good cast. Then you'll go around a bend and the river spreads out and widens. If you're fishing the left bank you'll be looking at the right side and wonder if you should move over there.

I didn't see the fish hit. I'd been working the banksides for a couple of miles with no activity and had pretty much given up the idea of any fish feeding binge. Lulled into distraction, between gazing into the passing forest, a satisfying pastime in itself, and watching for any downstream deadheads I was basically going through the motions. I don't know if I first felt the tightening line or saw the boil just under the surface from the corner of my eye, but I do recall making one deliberate long and hard strip set before losing some line to the musky torpedoing away.

Fighting a big fish is always fun, that's why we do it, but add the element of standing in a narrow out-of-control jon boat being turned by a hard pulling fish on collision course with a brush-lined riverbank and you have the makings for a mild tragedy or hilarious comedy. Just before hitting the bank I sat down to avoid being thrown off balance (I once drifted into a submerged log that stopped the boat dead and I nearly pitched backwards into the drink) and continued playing the fish.

I ended up on my knees one-handing the net under the fish and bracing the handle on the gunwale as a fulcrum to lift. Somewhere along the way I tossed the anchor and stopped the boat bouncing along the shoreline. The barbless hook came out easily and I admired the fish still in the net. Compared to the width of my boat this fish was probably 38, maybe 40 inches of spotted silvery green firm muscled musky. Awesome! It was a two-second decision to can the monkey-motion it would take to get a decent photo, so the net was lowered and this beauty of a fish swam away with a swish of it's tail. I'd have no proof to show for the catch, but the experience was all mine and as right as it could be. I smiled at the thought.

Getting the boat up the take-out wasn't as simple as getting it down, but thanks to a stout rope and long winch strap I was on the road for home as the sun went down. A good adventure and a great memory to be thankful for. 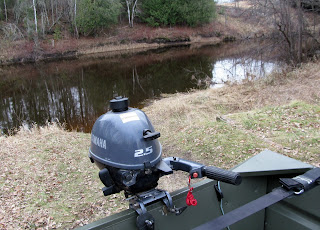