Really? What a strange term – reduced to possession – and one that I’ve never liked. I know it generally describes the end result of killing a game animal, but I could never agree that the grouse in my hand has been reduced in any way. If anything it seems the bagged quarry is elevated somehow, for as much as we think of and talk of the beauty of the bird, don’t we really only become fully aware of genuine beauty when we have it close in hand. Of course, the bird might have a differing opinion of all this but it’s an unthoughtful and cold hearted gunner who doesn’t appreciate, at least for a moment, the dark neck ruffs and intricate markings of the feathers before smoothing them a bit before sliding the bird into the gamebag. I can’t say I’ve ever pouched a bird without fanning it’s tail open for a few seconds, at least. Maybe I was confirming the sex, or the size, but likely I was just looking at it because I wanted to. I can’t walk by a good work of art without doing the same. Sometimes I’m drawn to stopping and gazing at the view, a dog, or maybe my gun, for much the same unexplainable reasons. Sure, I know there are guys who swat birds and toss ‘em into a milk crate strapped to an ATV or into the back of a pickup with as much deliberation as they would dropping cans of beans into a shopping cart. I don’t get that and I don’t know what to think of it. 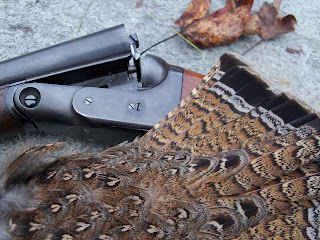 Nor have I ever harvested a grouse. I’ve harvested some tomatoes. Some potatoes, too. Quite a variety of vegetables now that I think of it. But I’m not a farmer – I don’t have the stuff it takes for that – I’m a hunter/gatherer. Grouse, like all the best of Nature are wild and natural. Have you ever heard anyone state they were out harvesting blueberries, or morels? Really? Even if they’re not wild, say we raise them, do we really harvest any animals? Does the stockman say he’s going to harvest some steers at slaughter time? We hunt grouse don’t we?... but we don’t “harvest” them.
I suppose it’s all just a way of describing the killing of game in an unassertive manner to avoid stirring the pot of the anti-hunting type of folks who are all so quick to proclaim what we do is wrong. I expect there are those of you who have to put up with that sort of thing more than I do. It’s easy for me to just avoid it. So, if you have to make your life easier by ending your hunting trip saying “I harvested a grouse, today,” well... I’m sorry. But believe me, you’ll feel better if you can boast, “Yep, I got me two grouse today” or “Yessir, I killed the biggest grouse I’ve ever seen. Took two shots, but I got ‘im. Just look at these tail feathers!"
I’ve shot birds with fellows who, when birds flushed, yelled “Kill it! Kill it!” That was always kinda disconcerting to me. It would have been far worse, though much funnier if they’d yelled “Harvest it! Harvest it!” Ha, that cracks me up just thinking about it!

While I’m on the subject of what I deem as incorrect lingo, the other day I was talking to a new hand in the sporting goods store about the right size scope cover for the optics on my deer rifle. He said I should bring the weapon in. God forbid I ever use it as a weapon.
Posted by Al R. at 9:37 PM No comments: