not ice fishing yet...

Today was one of those day’s that sticks with a person. No, nothing spectacular happened. Nothing earthshaking or heartbreaking. Just a simple day filled with simple pleasures that make it easy to believe we’d be content if everyday was like it.

I woke this morning with the sun, naturally with no alarm. There was no reason to hurry, I had nothing pressing to do. Just live out the day. I slipped into insulated coveralls to take care of the outside dogs and was surprised at the mild temperature outside. There was fresh coffee in the kitchen, but I let Jack and Molly run around while I grabbed the maul and split the blocks of birch I’d cut up yesterday. A good way to work up a bit of an appetite for breakfast.

Indoors the Christmas tree lights glowed cheerily and I traded looks between the tree in the living room and the birds outside the dining room window. Breakfast was tasty, and the coffee was particularly delicious. There were some freshly painted bass poppers drying in the den, so I moseyed in and experimented with ways to add rubber legs and skirts to the foam bodies before I put the finishing touches on them. All the while I pictured casting to a rocky shoreline and whooping it up when the hog bass bashed the fly on the surface, and contemplated the colors to complete them.

Over the last several weeks it’s become my practice to spend Sunday afternoons watching at least part of the football game with Dad at his home in town. We usually get some food, have a beer, and generally reaffirm how glad we are not to be devoted fans. As often as not we end the game playing dominoes at his table. That was my plan for this afternoon, but it was a beautiful day and there was time for a quick hunt on the way to town.

I turned Jack and Molly loose on a powerline that I wouldn’t usually hunt earlier in the season. There was mostly old timber bordering the right-of-way and much of the way is through swampy terrain that will have you knee deep in water when it’s not frozen. But it is frozen now, and with a couple of inches of snow and today’s sun and 30 degree temps it made for a fantastic day to be out.

Jack bounded ahead and disappeared into the woods while Molly raced around in front always keeping an eye on me. I was just enjoying the movement when I heard Jacks bell fall silent off the south side. I caught a look at his orange collar from under the powerline and heeled Molly as we came up behind him. I told Molly to sit when we were close and I moved around in front of Jack, shotgun at ready. I spotted a running grouse trying to put some distance between us and stepped quickly to get a position. The grouse ducked behind a huge old popple and took wing. I fired when I saw it for a bit but never touched it. Molly broke at the shot and started another grouse, this one heading fast the other way. Seems most of my shooting is best done when I have no time to think, and that’s how this worked. I stood happy with my gun open as the dogs looked for the bird when a third grouse got up from the same vicinity and came flying right at me at about eye level. It banked left when it was about thirty feet away, flying as slow as it could and still stay up, zigged through some trees, rose up over the cover and hung for a second before going on out of sight. About as easy as they come, if your gun is loaded! 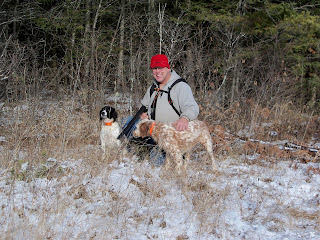 The birds were in groups, as I often find them this time of year. They were in big woods with lots of balsam cover, too. Jack pointed three more times as we made our loop, and he had grouse before him each time.  I couldn't locate him when he stopped the last time. I had an idea where he might be but the cover was so tight and thick I was hesitant to go looking in case he was still moving. I tooted my whistle and heard his bell clink a bit just as a few wingbeats started. He was close and it sounded like a grouse had jumped to a tree. I pushed in and spotted him right off and knew he had grouse. Molly sat while I moved in keeping an eye to the trees above. A grouse jumped and disappeared from a tall balsam thirty yards away. I had to smile, Jack had another good find but I just didn't have a chance. I turned back and saw Jack still pointing in my direction and Molly sitting a few yards behind him. It was a neat sight and I said out loud "Nice." That's when the grouse sitting over my head took off like a rocket from the branch above. The grouse wasn't as fast as my load of birdshot, however, and after a quick retrieve we hunted our way to the truck and headed for town. I didn't kill every bird I saw, but it's something special when it works. The dogs love it and I doubt I’d be out there without them. The swamps are frozen and allow access that can't be had early in the season. Today I found a little high-ground island in the midst of wetlands that held two grouse. A good little piece of cover that I'll visit again, but only if the way is froze. The weather can shut us down anytime, now. I hate to know the last hunt of the year is over, but it may be. Still, my shotgun is at the ready, the dogs are willing, and for another day like today, you know where I’ll be.