Yesterday's TV news was focused on the weather: winter storms racing across the country. Here in Minnesota they showed cars and buses sliding out of control on paved roads covered with glare ice. Over 300 crashes reported in less the five hours, and still counting. Kids were ice skating on the streets and sidewalks. State Patrol banned tow trucks from going out. Dangerous stuff.

Up here the storm didn't hit until late last night. It was just starting to snow when I hit the sack. This morning the storm continues. I've nowhere to go and I'm happy about that. Our electric power is still on, but the generator in the garage is gassed up just in case.

I was sitting in my front room chair trying to read but was constantly distracted by the blowing snow outside. The strong wind is swirling around, one minute from west, then from the east. It's nearly 30 degrees and there's an icy sleet mixed in. From my corner of the cozy front room I listened to the sleet peppering against the windows. Our Christmas tree is still lit and all is quiet but for the wind. 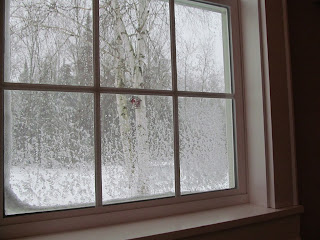 Sitting at this keyboard I can look over at my beckoning fly tying vise and will likely put it to use later. The coffee is delicious, I can smell bacon frying, and I'm happy knowing the cupboards are stocked. I can, and probably will, stay here for days and go outside only to move snow, hike on snowshoes and ski. 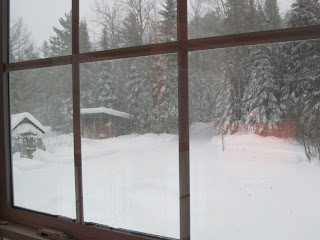 Some folks have to travel on days like this. I used to, but these days I'm grateful for the peaceful pleasure of easing back and watching it snow. Stay safe and Happy New Year.

It seems like we were just wondering where the heck October went when we turned around to see November is gone, too. Deer season came with a little snow and we (Gabby and I, at least) were hopeful of getting into some of the local covers for grouse when deer season ended. More snow came, however, along with some rain that ended up putting an thin abrasive crust over 8 inches of snow and adding a layer of ice to our sidewalks here at home. Hard walking and harder on dog feet – I pretty much gave up on dog boots long ago – so we all but called it a season. I haven't yet put the shotgun away, but I have taken the extra hunting clothes and sleeping bag out of my truck. 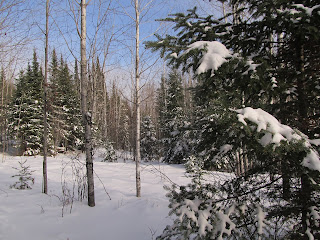 Just after Thanksgiving came the storm that caused headaches across the country. It didn't bother us much though, a few hours moving snow and now it appears winter is here. Yesterday morning I woke to minus 10 degrees. I'm happy not to go anywhere, at least by automobile, though I went to town four days ago to get dog food and seed for the birds. Other than that my travel has been by foot, ski, and snowshoe. 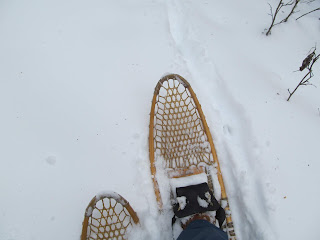 One of the neat things about snow is all the life it reveals. Every morning we see new deer tracks crossing the yard and a short snowshoe hike out back shows where the weasel (now an ermine) has hunted for mice; a fox criss-crossed the meadow; a grouse marched behind the kennel; snowshoe hares and squirrels racing around; a couple of bucks rubs and deer beds. 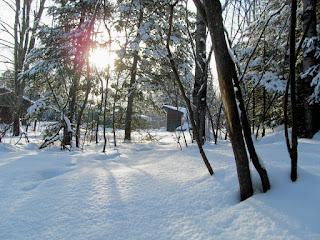 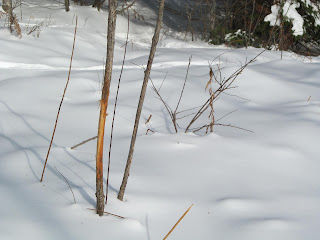 Last spring I bought a pair of the new style metal framed snowshoes. The April crust of snow made woods travel easy, and on snowshoes you could explore almost anywhere on the basically flat smooth surface hardly leaving a track. Trouble came for me on the hills, however, as my good old wood and rawhide snowshoes could find no purchase on the harder layer of snow. Going uphill I could sometimes punch my toe into the snow to climb, but downhills felt like I had an out-of-control toboggan on each foot. The snow wouldn't hold my weight without snowshoes, but I didn't need the flotation of the near 5-foot long Alaskans. 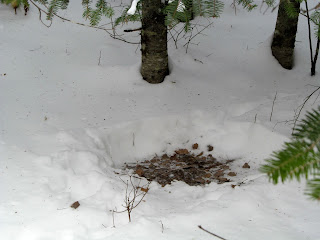 After some research, I purchased a pair from a small local sports shop. I looked at cheaper models but the the ones I picked are made next door in Wisconsin by a company that employs folks living with some kind of disability. I like that.

My new shoes were just the ticket, light weight and shorter to maneuver through the woods, the crampons underneath bite the snow for great traction going up or down. They might be a little racy looking for my tastes, but at least if I'm looking for them they're easy to spot. I won't abandon my traditional snowshoes, not by a long shot, but when conditions are right I'll be wearing the new style. Another season is here. Enjoy! 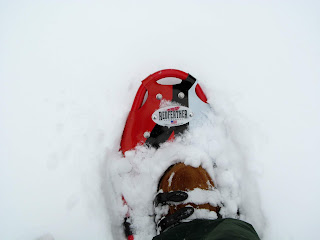 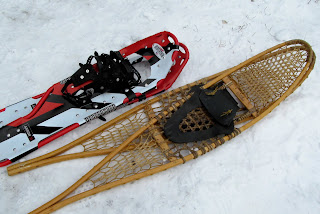