From my canoe I looked upstream at the falls, still amazed that the entire river fits and falls through that narrow rock gorge. Above the falls the wide and lazy river narrows to a steady and strong slick at a surprising rate. It pays to pay attention. Long ago I'd heard a story of a Forest Service employee who's aluminum canoe had been pulled into the falls along with himself and his springer spaniel. The dog survived. 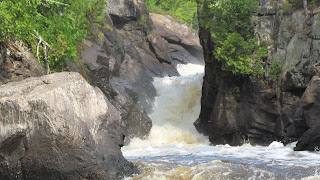 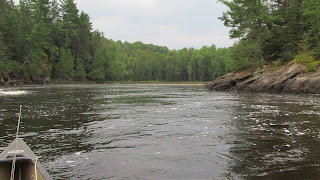 I paddled into the bay I hoped would be loaded with bass but was disappointed that weeds had pretty much filled what I once remembered as a honey hole. The most interesting thing there was a boat that apparently went down the falls. It was stuck upside-down in mud but I could see the bow smashed in. I don't know how it ended up where it did, but if anyone had been hurt I would have heard about it. Recovering it will be tough - if anyone bothers to try. Surveying the scene I recalled some harrowing experiences I've had with dangerous water and realized with a different turn of a leaf I could've easily not been here today. I looked skyward for a moment then touched the zipper on my life jacket. 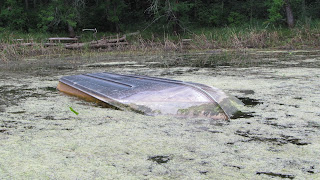 Near the entrance to the bay, in the river proper, I caught smallmouth bass with deerhair poppers in jumbled rocks along the shoreline. Yielding to the current I eased downstream and aimed for a rocky point across the river. A commotion behind caught my attention and I turned to see I had an audience. Several adults and a passel of children had found the portage trail around the falls and hiked it to rivers edge. If there was ever a time to blow a cast that was it, but my popper flew straight and true and a nice bass exploded on it the second it hit the water. I landed the fish amid the cheers and waves of the folks across the river. To makes matters even better, my next cast connected too! Maybe my spectators thought I was showing off, but at any rate after that second fish they disappeared up the hill into the woods. 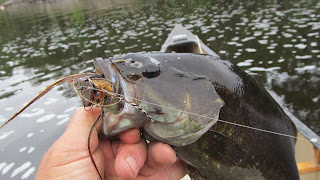 Autumn is on the way. A couple of frosty mornings let us know, as if we needed reminders. Grouse hunting season opened a couple of days ago and it's time to start splitting the hours between fishing rods and shotguns. It may be a little bittersweet for me but my English setter, Gabby, is thrilled. Autumn doesn't last long so we'll make the best of it. I was a regular at the skeet club for the last couple of months hoping to tune up the old shooting form, to good effect I hope. 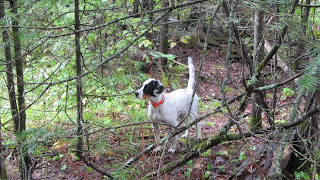 But there was still the urge to organize a couple of fly boxes for some late season trout fishing. So little time, so little time. 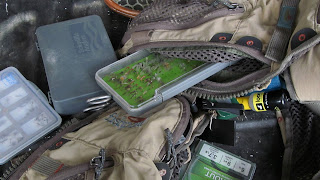