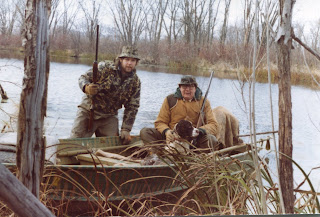 My dad is in his eighties and doesn’t hunt anymore, but he still gets the outdoor magazines and is pleased to hear about my hunting experiences. But even more enjoyable are the stories he tells of past hunts from before I was born and when I was just a youngster.

Just as I was raised by an outdoorsman, so was Dad. My grandpa and his brother had a duck camp in southeastern Minnesota on the backwaters of the Mississippi river just north of the little town of Weaver. The cabin was built of vertical logs chinked with mortar, heated with a barrel stove, and lighted by lanterns. Near the water was a three sided boat shed where six or eight small flat bottomed boats hung like canoes. I well recall dark mornings of camo-clad men sliding the boats over frosty leaves to the dock while various hunting dogs crunched the edges of the yard marking territory. I was put in one of the little double-ended wooden duck boats when I was five years old, and my dad would pole us into the marsh and shove us into the high cattails and reeds. Our dog and I would sit in the boat and Dad would push a long one-legged stool into the muck and sit with his waders on alongside us. I would shiver from the cold and excitement as he called ducks to our decoys and watch as he shot mallards and wood ducks and widgeons. Our yellow lab, Queenie, flew from the boat to every fallen bird and I was awestruck at her retrieves. Gramps would sit in his boat not far away and Queenie would bring his ducks in to us. Gramps was something of a legend around the area in those days for his shooting skill. His little boat was just big enough for him alone and he would shoot from it right or left handed, depending on which way the ducks presented themselves. I loved it all.

At seven years old I was presented an H&R single shot .410 with a hammer that I practiced with constantly until I could cock it pretty well, but it was always a battle to get my one little shot off at approaching ducks. I begged Dad to let me shoot some of the coots swimming around, and sometimes he'd let me to keep me interested. Then came the day when he poled us over to the mainland and I followed him, sneaking into the woods to a duckweed covered pothole surrounded by hardwood trees. We crawled close with Queenie following and Dad parted the grass to show me a pair of wood ducks perched on a rotting log out in the middle. They were the only ducks I could see and he told me to take the one on the right. I eased the hammer back and from a prone position shot the beautiful drake. My shot startled at least forty ducks from the green pond but I was only interested in the one I'd shot, which had disappeared and I barely heard my dad’s gun going off at some of the others. Before I knew what was happening, Queenie was clawing her way over the log to retrieve my duck and came swimming back leaving a path of clear water behind her. I held my duck and marveled at it while Dad sent her back for the ones he had dropped. It was the first duck I’d ever shot, and it was amazing.

We were shooting lead shot back then and I used that little .410 those first years with enthusiasm, but didn’t hurt many ducks. But I was part of the club, and in my cabin bunk I’d listen as Dad and my uncles poured whiskey and talked about the day’s hunt. It was two months before my tenth birthday when I dropped one of a trio of snow geese that came to our spread. It hit the water but tried to get up again and Dad finished it with his 16 gauge Remington Sportsman. In his basement hangs the photo of the two of us holding that goose, wings spread wide, to this day. That’s when I graduated to my uncle's 16, a twin to my dad’s. The goose was mounted and adorned the wall in duck camp.

In the ninth grade I’d saved enough trapping and odd job money to buy a used 12 gauge 870, but Dad used that old 16 for years until I’d grown and left home for some schooling and went to work. One of my biggest purchases then was a brand new Browning Auto 5 Magnum Twelve. I gave it to him for Christmas. He killed countless ducks and geese with it up until a few years ago, when he handed it back to me along with his 14 foot boat filled with decoys. 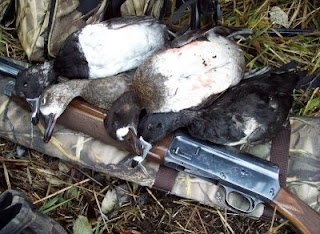 I was out with it again the other morning. Wind pushed rain at my back while I looked out over three dozen dekes. A gray, wet day perfect for hunting, a few small flocks of ring-necks and a couple of bills were lured close enough for some fast shooting. It was over quickly and I was home for late breakfast, but man, was it great! And Dad was happy to hear about it.
Posted by Al R. at 11:14 PM