Won't be Spring for awhile...

…but it almost felt like it for a couple of days last week. We enjoyed melting weather for three days, and one night it didn’t freeze and there was no ice on the water buckets in the morning. Nice. The sidewalks and kennels were down to bare concrete, people were skiing in shorts and tees, and it was downright pleasing to have a case of spring fever. We missed the January thaw, there wasn’t one. It seemed like it snowed daily since Thanksgiving and when it wasn’t snowing it was 20 below or colder. So this February thaw was more than welcome. Of course it didn’t last.


This morning I woke early but, weary of crawling out of the sack in the dark, I napped until the rays of the morning sun broke into the window and I could see the grosbeaks, and chickadees, and redpolls flitting around the bird feeder. I was still in pajamas when I pulled on my boots and coat and followed Ty out into the sunny morning to let Jack and Molly loose from the kennel. I kind of hated to let them out because the packed snow around the feeders is high enough that Molly can nearly jump up and reach them. The grosbeaks are shy and non-confrontational and won’t tolerate being hassled by an annoying spaniel, so they leave immediately. Only the chickadees are brave enough to quickly land, grab a seed, and head for the higher branches of the trees. When the dogs get tired of chasing little birds and head off for another part of the yard to search for mischief, a hoary woodpecker will appear and take a few stabs at the suet, and a nuthatch will join the chickadees for a quick bite.

I didn’t stay out long in my pjs. The thermometer read minus 5 and the lure of hot coffee inside was too much to ignore. After breakfast I sat with a cup and watched the birds for a while, and now and then a setter or spaniel would pass by on snow banks window high. The dogs were light-footing across the yard on a thin crust of snow. Every dozen steps they would break through and I could nearly feel their frustration at not being able to open up. I also had a feeling the conditions would make for some wonderful snowshoe travel and before long I was outside affirming the idea.

A light dusting had fallen last night, just enough to make for excellent tracking. The crusty snow held my weight and I snowshoed throughout the woods easily and randomly north. There was no need or desire for a trail so I just walked where I wanted. I carried my cruiser axe in case I had reason to clear branches but there was no need; I just took the clearest route, but I did use the axe to check the snow depth beneath me out of curiosity. Each time I pushed the handle into the snow it went the entire length right to the steel head of the axe.


I saw tracks of fox, coyote, fisher, marten, squirrel, rabbit, mice, and deer. The deer were using packed trails and I’m sure they’re having a heck of a time now. I expect we’ll lose a fair number this year. I did not find any wolf tracks in the area I covered behind my house, which is a bit unusual. I have to pity those deer when their tiny hoofs pierce the crust that holds up the broad-footed wolves. I've seen the results and know how harsh Nature can be. There were also grouse tracks, and quite a few of them, which I always like to see. I think the grouse will have a hard time getting through the crust right now and that’s a concern, especially if it stays cold, but this happens every year and the grouse always seem to survive. Though today I never saw any wildlife other than at my bird feeders, I’ve been seeing grouse regularly coming out to road edges and pecking gravel and high in birch trees feeding on, I suppose, catkins. I often flush grouse near my pigeon loft and wonder if they are there for some feathered company. 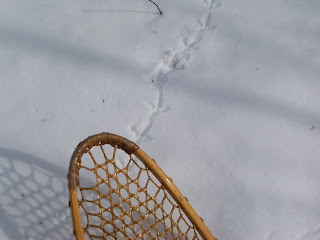 This afternoon the clouds rolled in and it started snowing. There were several inches of fresh snow by dark and I’ll bet tomorrow morning will be a good time to be on skis. Hhmmm…
Posted by Al R. at 9:40 PM