Often this time of year the days warm to above freezing and drop at night to create a crust on the snow that can hold the weight of a hiker or skier and I've had a lot of fun mornings skijouring with the dogs. It usually has to be early morning, because the couple inches of crust weakens during the day and you'll be out there slogging knee deep if you're late. I broke a ski once when I didn't get off the snow in time, but it's been a little different this late winter.


After several days of thawing temps that softened the snow and gave us all spring fever, it turned cold, real cold, twenty below zero. Two days of that and a light dusting of new snow created a condition the outdoor industry should have promoted. A week ago you could hike all day through the woods on two feet of snow frozen almost rock hard. Open meadows and fields on XC skis were effortless – better than the groomed trails – and four miles of uninterrupted power line right-of-way made for eight miles of easy recreation. It's a rare opportunity to enjoy the outdoors that many miss out on, and it doesn't last long. 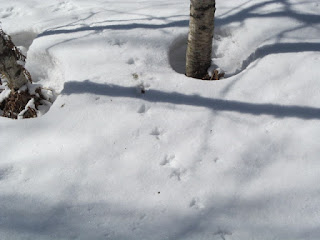 I couldn't resist a hike north towards the lake so I turned the dogs loose and we were off. Easy walking on the hard snow between trees and around thickets, climbing the hills and crossing the swamp while the dogs raced ahead. The fresh snow revealed movement of wildlife only hours, or perhaps minutes, old. Even the deer could run on the hard surface. Two grouse flushed when we approached but were gone before Gabby had a chance to point. Here and there a fox had hunted the mice and snowshoe hares that left their prints everywhere. A weasel had searched edges of the ash swamp. On the hill overlooking the lake I found a stand of young Norway pines that had suffered the work of porcupines. A dozen or more six inch pines stripped of bark. 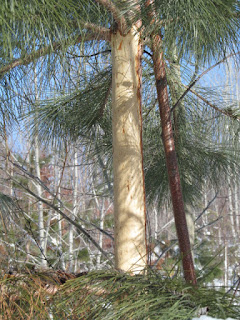 Those of us who run bird dogs have no love of porcupines but more concerning to me were the wolf tracks we came upon. Wolves are not uncommon and it's not a surprise to hear or see them occasionally, but I felt a little uneasy with the two setters running among wolf tracks that were not very old and I instantly thought of the pistol I'd left at home. We're in the woods a lot and I don't generally worry much about the wolves nor have I ever had trouble with them, but I'm not looking for the first time, either. I turned the dogs around and we headed back. 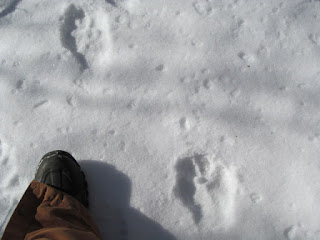 That was last week. This morning it is near 40 degrees and raining. The snow is turning to mush, the driveway is turning to slush. It's a messy time of year. The good news is there are steelhead starting in to the Brule River, and they're catching a few kamloops and cohos off the north shore of Lake Superior. It's not that far away, I think I'll rig up a rod.