There's a little glass dish on my desk with a few egg flies in it. I tied them the other evening when I was thinking about steelhead fishing. They say egg flies are about the easiest pattern to tie and I won't argue, but mine are the worst I've seen. I don't get it, I know they're supposed to be round but half the time mine have a noticeable belt around the middle from the tying thread. Or I don't get the hook covered on the bottom side. I do have better luck with McFlyFoam, but I have several bags of yarn that I don't want to waste. I'm not the greatest fly tier, for sure, but I do manage some pretty decent flies for trout to muskies. These eggs have me be-jiggered. 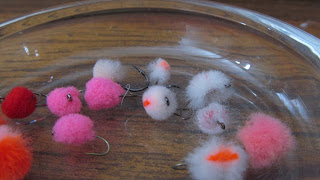 I didn't put my fly rods away until deer season was over, and I was hesitant then. We had a good blanket of snow on the ground, the lakes were freezing over, and Ole Man Winter wasn't waiting until December. So the rods took their place in the can next to my desk and the reels, fly boxes, and other accoutrement found the bin marked “fly fishing” on the basement shelf. I recalled the fishing that took place throughout the year and couldn't help thinking there might have been more. I just don't want to see another year end, I suppose.
Sometimes I get a shudder pondering how many seasons and trips I have left in me. I'm not a doom and gloom sort of guy, but I've been around long enough to know that the number of years ahead are less than the number behind. I know I'm living a gift and hope I'm doing it well, but there are times I wonder.

Most of my steelhead have come on bugs; prince nymphs and pheasant tails with added rubber legs or something similar. Many of our steelies are taken on yarn egg patterns but I just haven't fished them much. Last fall I'd hooked two steelhead on my PT and was feeling pretty good standing in that north shore river. I moved on when an old-timer stepped into the river on the other side and after he caught fish after fish from the same run I'd just fished my partner walked down and asked what he was using. Yarn. Well, I'm gonna give it an honest try if I ever get one that looks right. The season is about four months off, so I've got some time to practice and plenty of material. 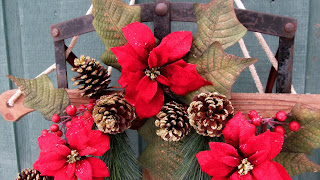 And it's Christmas time. Some love it and others don't. Some thrive on it and others hope to survive it. Christmas is getting easier as I get older. Gone are the hectic shopping trips between work schedules and 300 mile drives to get where we had to be. It doesn't last long, the music is fine and the decorations are up. Appreciate the reason for the season and each morning, before dawn, I sip coffee next to our lighted tree and listen to the silence. I hope it's as good for you, and wherever it finds you, Happy Holidays!