Most of the guys out at the skeet club know I'm a fly fisherman so when I show up I'm often asked “how's the fishing?” Sometimes I have something to say and sometimes not. There's one fellow out there named Red who is a fine outdoorsman and shows up with a collection of expensive Italian and Spanish side-by-side shotguns to shoot clay pigeons with. Fine bird guns for sure – some would call them fowling pieces – though the serious skeet shooters are more impressed with their florescent sighted, adjustable stocked over-unders and auto loaders.

Red is also reputed to be intimately acquainted with every trout stream in the entire Arrowhead region. However, like so many folks around here, Red believes the primary purpose of angling is to secure a meal. Meat. Red is 70-some years old and in fine physical shape but told me he'd quit trout fishing back when the daily limit was lowered to five fish. Bringing home a measly five trout was hardly worth the effort.

Red knows I enjoy tying big bass bugs and streamers and will travel for hours to float rivers and cast for smallmouth bass – “Why? I wouldn't eat one!” They're fun to catch, Red, and we don't eat 'em, we release them, you know, catch and release. And good times with good friends. Red shakes his head. It's kinda' like skeet shooting, you'll shoot six boxes of shells out here today but take nothing home to eat. He just ignores me. 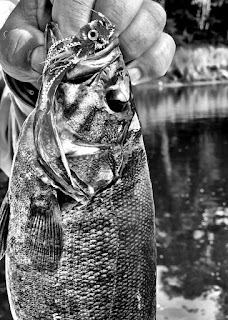 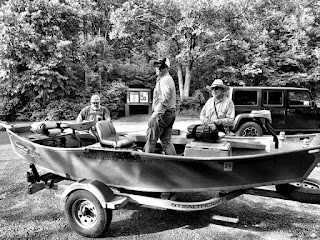 “How about trout?” Yeah, Red, I caught a couple little browns on a small streamer last week. “You'd do better with worms.” But that little fly stuck in the corner of their mouth makes it easy to release them.
Red walks away. You know, a ham sandwich tastes good, too. He's gone. 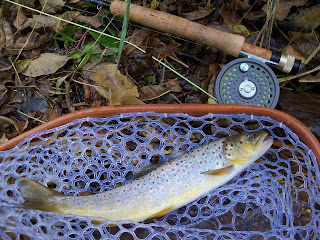