A year ago there was snow on the ground here and there will be again, soon, if the snow buntings I spotted on Friday are any indication. Those pretty little white and grey birds don't stick around long, apparently migrating ahead of the snow storm that's soon to follow. I've never known them to be wrong and snow will start falling within two weeks of first sighting them. And it's often less than two weeks.

Until then, however, the Northwoods autumn has been a fine one to enjoy. Tamarack trees have turned their winter golden/orange and it seems they soak in sunlight on bright days and emit a glow on cloudy days. Most of the leaves on the aspen and maples have dropped to a carpet of subdued color on the ground, and it's become cool enough to wear my favorite hunting coat while following Gabby in search of grouse. There's been a skim of ice on the water-filled ditch across Mattson's swamp each morning I pass on our way to the grouse coverts. 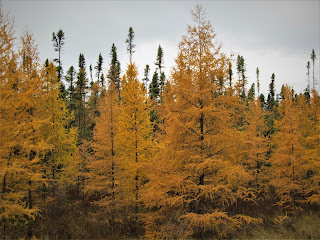 I've been behind bird dogs every fall for something like 40 years. Still, the sight of a white English setter locked up like a statue among that umber-colored forest floor thrills me to this day. Pushing through the thick stuff to flush the bird is seldom easy and the explosive flush of ruffed grouse doesn't always offer the chance for a shot, but when it works and your aim is true the bird takes the shot, pauses in mid-air as if waiting for the echo of the gun to subside, crumples and falls. The result is a feeling close to elation. I hope that never changes. 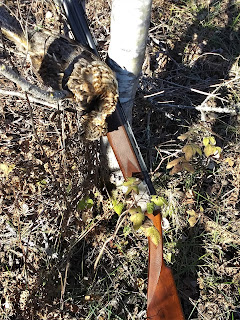 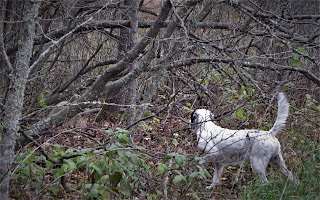 There was a day when I hunted from light to dawn. I had a number of dogs and rotated them throughout the day. If the season was open I was hunting, rain or shine, with an exuberance only youth can provide. I made trips for western grouse, partridge, and pheasants. I shot, and missed, many birds. When I look through the early pages of my gunning journal the numbers sometimes surprise me. Some folks may have thought I'd have done better given the time I spent in the woods, while others may have declared me a greedy game hog. I'm not much of a score keeper and stopped recording the count long ago. Instead I keep track of incidents --  like twice last week when I took a shot at a fast departing grouse then opened my gun to reload when two more birds wasted no time climbing for altitude and leaving while I stood flat-footed with one hand in my pocket and the open gun in the crook of my arm. Or when I drove an hour to a favorite cover to find I only had four shells along. Once we surprised a pair of trumpeter swans on a beaver pond and their flapping wings and tumultuous voices resounded over the lowland as they clamored for the sky. Or when Gabby did a fine job of nailing a running bird after several re-locations and the comfortable heft of that grouse in my game pocket. 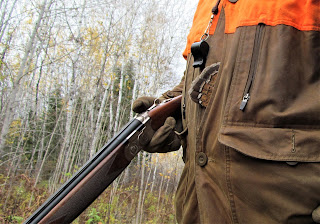 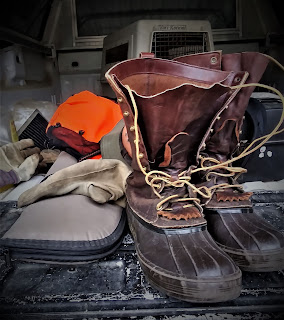